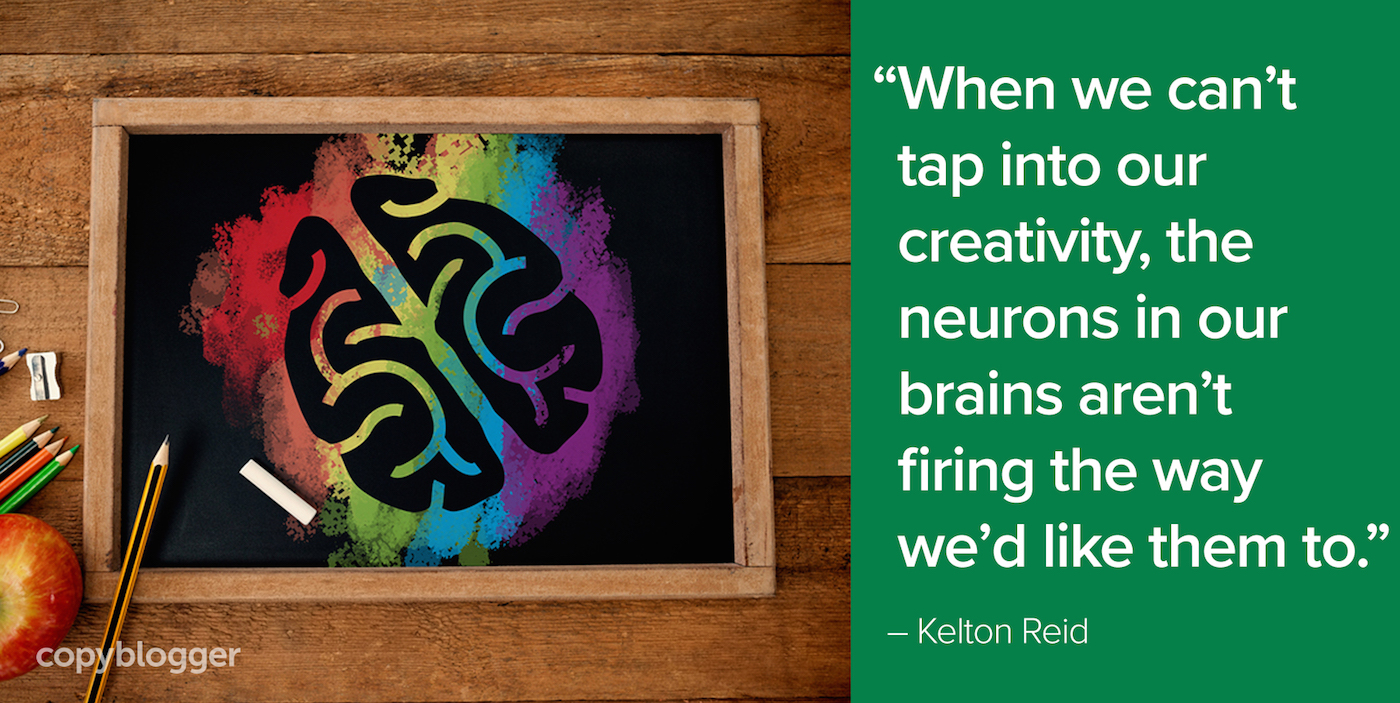 There are approximately 86 billion neurons in the human brain, give or take a few million.

Our next closest competitors in the animal kingdom are gorillas, who have around 33 billion, and then elephants with a far more generous 257 billion.

To put all those numbers into perspective, our Milky Way galaxy has somewhere between 200–400 billion stars. That’s a lot of zeroes (and gas).

Although other animals do have artistic tendencies, sadly, neither gorillas nor elephants have been able to write a bestselling novel.

Neurons are responsible for how our brains process information and what makes creativity — and thus writing — possible for humans.

So, what happens when we feel like we can’t write?

“I don’t believe in writer’s block. Think about it — when you were blocked in college and had to write a paper, didn’t it always manage to fix itself the night before the paper was due? Writer’s block is having too much time on your hands.” – Jodi Picoult

After interviewing neuroscientist Michael Grybko for The Writer Files podcast about the dreaded writer’s block, I started to understand just how important our brain and emotional health are to staying prolific.

To put it simply, when we feel like we can’t tap into our creativity to get words onto the page, the neurons in our brains aren’t firing the way we’d like them to.

It’s easy to use the tired trope of the writer as athlete, but it somewhat devalues the processes our brains engage in to communicate effectively with written prose.

There are somewhere between 650–800 muscles in the human body and it takes only about 20 of those to pick up a pen and scribble down a note on a piece of paper.

But in order to fire millions of complex patterns of neuronal activity in tandem, the brain must be trained for years and years before becoming proficient enough to turn stimuli and information into something useful.

“Only amateurs have time to obsess to the point of frustration. Professionals have continual deadlines — they learn to put out their best work and move on.” – Stefanie Flaxman

Writing is admittedly far more complex than simply lifting weights or learning to dribble and get a ball into a net, although fiction writers and pro athletes have been shown to engage similar brain activity.

It’s also easy to understand the superstitions and misconceptions that surround writer’s block. Until recently, we really didn’t know that much about how the human brain works.

On the same podcast episode I referenced earlier, I spoke with Mr. Grybko about the many famous writers who have discussed writer’s block, from Toni Morrison to Joyce Carol Oates.

Ms. Morrison would tell her students that writer’s block should be respected and to not try to “write through it.”

Whereas Ms. Oates doesn’t believe it exists, but admits that “… when you’re trying to do something prematurely, it just won’t come. Certain subjects just need time …” before they can be written about.

Steven Pressfield, in his classic The War of Art, described it as something closer to a supernatural force inside writers and artists dubbed Resistance that shoves us away, distracts us, and prevents us from doing our work.

But with our new understanding of how all of these neuronal processes are connected, it’s far easier to get a handle on why we may be “blocked.”

“… [Our brain’s] connectedness also comes with a downside; activity in one area of the brain may affect another area in a negative way. Our emotions can have an impact on our productivity and learning … When activity in the area of the brain that is responsible for processing the information needed to write effectively is altered, the result may be writer’s block.” – Michael Grybko, Neuroscientist

Michael and I discussed a handful of the symptoms of feeling blocked and how to reframe them.

Whether you’re trying to write at a time that’s not optimal for your creative output, or simply not feeling like you can carve out the time, there are patches you can apply.

We all operate on unique sleep/wake cycles (Circadian rhythms) that originate in our brains, so if you’re having trouble writing in the middle of the day, try writing later in the afternoon or evening when your cycle may bend more toward insight.

In “How to Kill Writer’s Block and Become a Master Copywriter in Only 3 Hours a Day,” Robert Bruce wrote about the famous copywriter Eugene Schwartz’s hack of setting a kitchen timer for 33-minute increments.

The key takeaway: By setting some simple constraints, the only thing you can do is type words. Restrictions and tight deadlines yield creative rewards.

Let your brain do some of the work for you

Michael’s other great advice was to utilize your brain’s tendency to work on a problem in the background and produce creative solutions when you least expect them.

This is why many famous creatives rely on exercise, meditation, “combinatory play,” and “productive procrastination.” They give your brain a chance to rest, parse out unneeded information, and help you cognitively.

Greg Iles (prolific #1 New York Times bestselling author) spoke with me about letting your subconscious do some of the work:

“Writing is a much more passive thing than people think it is … The real work is done passively, in your mind, deep in you when you’re doing other things. I try to go as much of the year as I can without writing anything, and the story is working itself out.

“It’s like one day, you’re a pregnant woman and your water breaks. Then I haul butt to get to my [computer] … and I start.”

The science of just getting started

I recently found a great productivity hack from author James Clear in The Physics of Productivity: Newton’s Laws of Getting Stuff Done.

He applied Newton’s first law to productivity and the science of just getting started:

I’ve heard this advice from many bestselling authors, and it seems to hold a lot of power, however reductive it may seem.

Hugh Howey (bestselling hybrid sci-fi author of Wool) also confided with me about his process:

“Open up the document, turn off the internet, and start writing. If you’re not sure what happens next in the story, skip to the part of the story where you know what is going to happen. Start writing there. Just start writing.”

My favorite part of his journey to globetrotting literary superstar is that he would write in a broom closet during breaks between his shifts at the bookstore where he worked.

You can’t edit a blank page

Austin Kleon (bestselling author of Steal Like an Artist) has some great advice on this:

“Writing a page each day doesn’t seem like much, but do it for 365 days and you have enough to fill a novel. You do it your whole life, and you have a career.”

When I asked New York Times bestselling psychological thriller author Cynthia Swanson about writer’s block, she shared this great quote with me …

“You might not write well every day, but you can always edit a bad page. You can’t edit a blank page.” – Jodi Picoult

Sometimes all you need is to change your mind

Michael Grybko reminded me that, very often, our emotional states have an impact on how motivated we feel to write.

We discussed an article by Maria Konnikova for The New Yorker titled “How to Beat Writer’s Block” that examined research by psychologists at Yale who noted the emotional states of writers experiencing block.

By getting the writers to focus on a creative project completely unrelated to their writing projects, they found success in changing their negative feelings about the writing.

“Further studies by other researchers have shown similar effects, with studies showing positive effects on creativity from a period of day dreaming, including an incubation activity that is dissimilar in nature to the target task, or even sleep.”

Go to the coffee shop; your brain will thank you

Michael also recommended working in a completely different environment than the one you’re used to writing in.

And science backs this up. Being around others who are hard at work on their own projects has been proven to influence our productivity and help us concentrate. It’s literally contagious.

From research examined in PsyBlog’s How To Concentrate Automatically Without Even Trying:

“In the current study, we showed for the first time that the exertion of mental effort is contagious. Simply performing a task next to a person who exerts a lot of effort in a task will make you do the same.”

The ambient sounds of a coffee shop are often enough to do the trick (see also: the smell of coffee), but there’s something almost magical about the watchful eyes and attentive posture of all of those other writers.

I asked Seth Godin a couple of questions on the subject in an interview: Do you believe in “writer’s block?” If so, how do you avoid it?

“This is a fancy term for fear. I avoid it by not getting it. Because I write like I talk and I don’t get talker’s block.” – Seth Godin

If you can talk, then you can turn on that little voice-to-text widget in your word-processing app or just ask Siri to take a note for you.

Unsurprisingly, those apps yield words on a page that can be edited and massaged into far pithier sentences in the future.

Until they can implant and successfully interface those nanobots into our brains that will translate our thoughts and allow us to write 100 words per minute … it’s as good a place to start as any.

Previous article: What Content Creators Can Learn from Professional Artists
Next article: What Happens When Your Humanity Befriends Your Knowledge