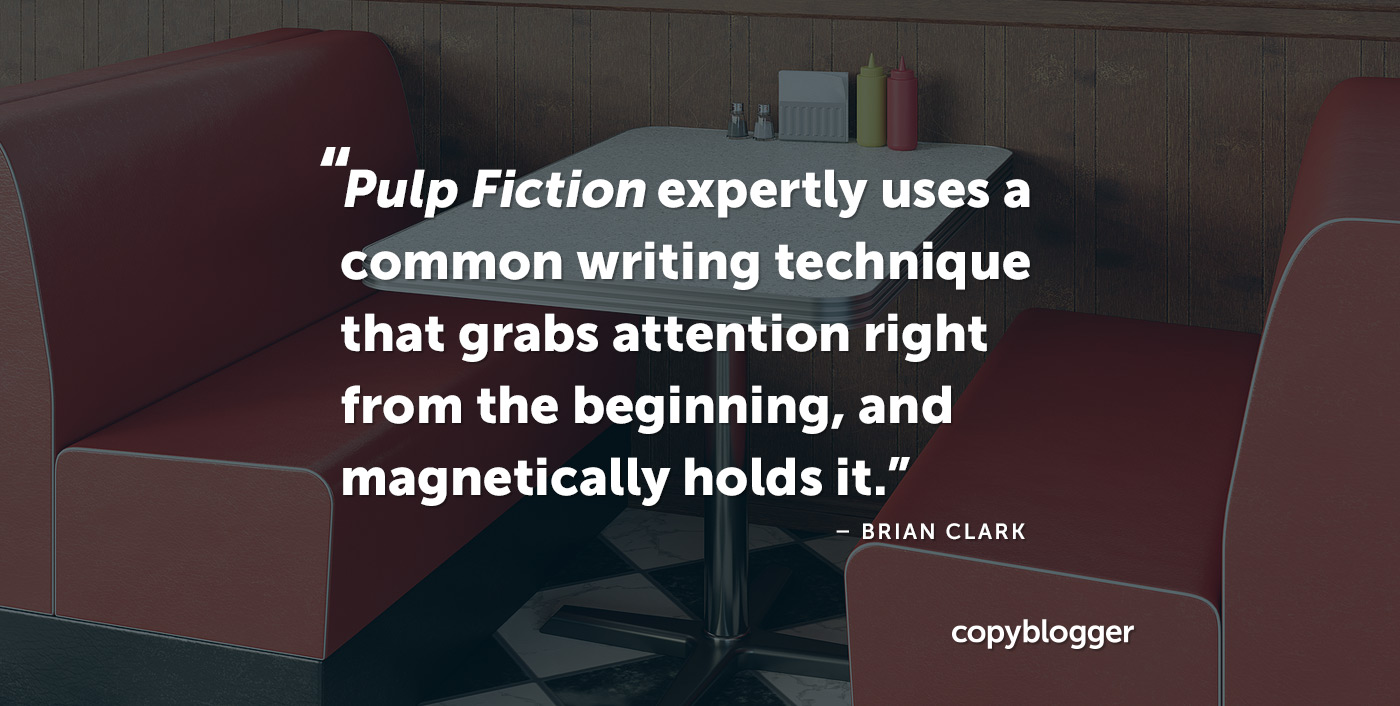 The film is highly stylized, presented out of chronological order, and filled with eclectic dialogue that reveals each character’s perspectives on various subjects. And yes, it’s profane and violent.

Pulp Fiction was nominated for seven Oscars, including Best Picture. Tarantino and his co-writer Roger Avary won for Best Original Screenplay, which is truly the foundation of an exceptional film.

Despite the groundbreaking inventiveness, Pulp Fiction also expertly uses a common writing technique that grabs attention right from the beginning, and magnetically holds that attention through a form of psychological tension generated by our short-term memories.

This simple strategy is something you can use in your marketing content, your sales copy, and your live presentations. You’ll not only increase engagement, but also add enhanced credibility to the persuasive point you’re trying to make.

Back during the aftermath of the tragic effects of Hurricane Katrina, I came across an interesting article about some less-than-inspiring aspects of the devastating storm.

It began with this:

“An Illinois woman mourns her two young daughters, swept to their deaths in Hurricane Katrina’s floodwaters. It’s a tragic and terrifying story. It’s also a lie.”

Now, any article that details accounts of fraud in the aftermath of Katrina would contain compelling information. But that opening had me riveted, and it got me reading what ended up being a detailed and lengthy piece that I might have otherwise skipped.

The article went on for 1,136 words before explaining that opening statement. It finally came as the initial bullet point in a list of false claims for relief after Katrina.

This type of opening with a delayed resolution is called an open loop, and it works for just about any type of content or copy.

No matter the medium, you always want to grab attention quickly and hold it while you provide the surrounding facts, lessons, or supporting evidence.

The information is the same, but the level of attention and even fascination on the reader’s part is greatly heightened by the structure, leading to better retention and potential for persuasion.

Open loops are used all the time in the movies. Think about James Bond, dangling over a vat of sharks.

While the villain monologues, Bond saves himself by cutting away the ropes with the buzzsaw hidden in his Rolex Submariner watch. Why do we accept, much less embrace, this ridiculous resolution?

It’s because the buzzsaw feature of the watch was introduced to us earlier during the new technology presentation from Q that happens in every Bond movie. The implausible becomes credible thanks to the setup earlier in the film.

These setups create open loops that will keep your audience itching to find out what happens in the end — a need-to-know phenomenon called the Zeigarnik Effect by psychologists.

In a nutshell, the Zeigarnik Effect means that we hold things in our short-term memories that lack closure. For example, waiters can easily remember the orders of each of the tables they’re serving — until the food comes out that is, at which point retention and recall diminishes greatly.

So, when you use the setup and payoff structure of the open loop, your audience is driven to keep going with you. And that’s what you want, right?

Consider cliffhanger endings, where a loop is opened without being closed. Not only do you want to know what happens, you remember to tune in next time.

The setup and subsequent payoff of an open loop is incredibly satisfying. And that’s why open loops are also powerful persuasion vehicles, because we embrace the payoff in a way we wouldn’t without the setup and time-lapse in between.

Think back to the James Bond example; the open loop made an implausible escape perfectly acceptable. As we’ll see in the next example, it can also make a commercial claim more credible, and even prompt the holy grail of direct response copywriting — action.

Loops that move people to act

So, how can you use an open loop in your copy to not only persuade, but also prompt action?

Take a look at the copy for this radio ad written by Roy H. Williams for a diamond merchant called Justice Jewelers:

“Antwerp, Belgium, is no longer the diamond capital of the world.

Thirty-four hours on an airplane. One way. Thirty. Four. Hours. That’s how long it took me to get to where 80 percent of the world’s diamonds are now being cut. After 34 hours, I looked bad. I smelled bad. I wanted to go to sleep. But then I saw the diamonds.

Unbelievable. They told me I was the first retailer from North America ever to be in that office.

Only the biggest wholesalers are allowed through those doors. Fortunately, I had one of ’em with me, a lifelong friend who was doing me a favor.

Now pay attention, because what I’m about to say is really important: As of this moment, Justice Jewelers has the lowest diamond prices in America, and I’m including all the online diamond sellers in that statement.

I’m Woody Justice, and I’m working really, really hard to be your jeweler. Thirty-four hours of hard travel, one way. I think you’ll be glad I did it.”

Okay, so the ad starts off by setting up an open loop. If Antwerp is no longer the diamond cutting capital of the world, which city is the new one?

But here’s the thing … we’re never told the city, or even exactly how low the prices are. To do that, you need to take action by heading over to the Justice Jewelers website, combined with a challenge to find lower prices anywhere else online.

Less artful ads would lead with the claim of the lowest prices thanks to an exclusive source of diamonds. Skepticism would naturally abound.

Here, the storytelling setup is incredibly engaging, even if you’re not in the market for diamonds. If you are in the market, the lingering open loop means the listener is more likely to retain, recall, and act on the information.

Can you see how this might work on a landing page aimed at getting an email opt-in? You open the loop, and the only way the visitor can close it is to sign up for the lead magnet.

That’s just one example of the many uses of open loops. As I mentioned earlier, you can incorporate open loops in your marketing content, your sales copy, and your live presentations, all making you inherently more engaging and persuasive.

And speaking of earlier, what about Pulp Fiction?

So I saw Pulp Fiction on opening night back in 1994, and oh man … that first scene. I’ve never before or since experienced a theater full of people bursting into applause after the opening of a film.

As a refresher, Pulp Fiction begins with a man and a woman sitting together in a diner. The two are known only by the pet names they call each other — Pumpkin and Honey Bunny.

They’re discussing the relative dangers of robbing various places, revealing that the two are criminals. They’ve been holding up liquor stores, which Pumpkin thinks is too dangerous and will eventually result in them or someone else getting killed.

After sharing a story about a man who robs a bank with a telephone, Pumpkin proposes that they start robbing diners. In fact, he suggests that they rob the diner they’re in, right now.

Up to this point, Honey Bunny has been nothing but sweetness and light. She suddenly jumps up with a gun and shouts some particularly shocking threats to the patrons. Cut to Dick Dale’s iconic rendition of “Misirlou” and the opening credits.

Now, the rest of the film proceeds. Some of what follows actually occurs before the opening scene, and some occurs after, but don’t worry about that right now.

The point is, much of the rest of the film plays out without returning to Pumpkin and Honey Bunny. Even though the film is riveting, in the back of your mind you’re thinking … what the hell was that about?

What happened to Pumpkin and Honey Bunny?

Finally, we arrive at the last scene of the film. It’s the same diner from the opening.

Turns out, this is where gangsters Jules and Vincent have decided to have breakfast after escaping The Bonnie Situation and disposing of a headless guy at Monster Joe’s Truck and Tow.

Cut to Pumpkin and Honey Bunny, just as Honey Bunny leaps up with the gun and makes her threat. Ironically, in their bid for safer crime options, these two fools have picked the exact wrong diner to rob.

The scene plays out and the film ends, which closes the open loop. Incredibly satisfying.

So, in case there was any doubt, you can also use open loops when crafting tutorial content as well — because I just demonstrated one for you.

The headline and opening of this article promise you an example from Pulp Fiction, but I didn’t actually close that loop until the very end.

Maybe you were wondering when I would get to it. Maybe you knew I was demonstrating an open loop in my usual meta way.

Maybe (hopefully!) you got so caught up in the article that it was only nagging you somewhere in the back of your mind.

Previous article: 3 Publishing Game Changers You Might Be Skipping
Next article: One Ridiculously Easy Blogging Ingredient that Satisfies Hungry Prospects