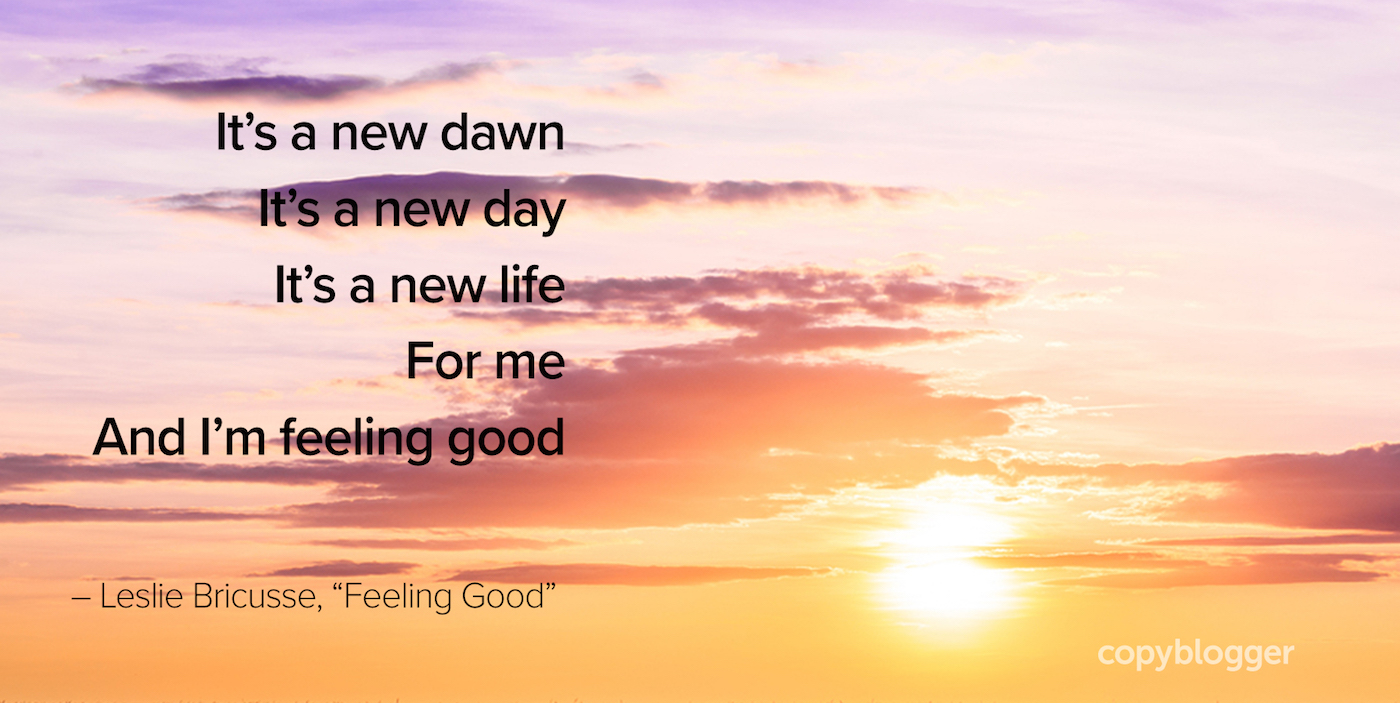 You may be surprised to see the lyrics in this article’s image attributed to Leslie Bricusse, because one of the most widely known versions of the song “Feeling Good” was recorded by Nina Simone (no relation to Sonia Simone).

So, with no disrespect to Leslie Bricusse …

Who the hell is Leslie Bricusse?

Leslie Bricusse “is an English composer, lyricist, and playwright, most prominently working in musicals and also film theme songs.”

He wrote the lyrics to “Feeling Good,” and Anthony Newley composed the music, for their musical The Roar of the Greasepaint — The Smell of the Crowd.

The song “was first performed on stage in 1964 by Cy Grant on the UK tour and by Gilbert Price in 1965 with the original Broadway cast. Nina Simone recorded ‘Feeling Good’ for her 1965 album I Put a Spell on You.”

When you create, you never know what’s going to happen

In the early 1960s, you’re a lyricist. It’s simply your job to write the words for a song.

And in 2017, Wikipedia displays a selected list of more than 50 notable recordings of that song — in addition to Nina Simone’s version — between 1965 and 2016.

That’s what happened to Leslie Bricusse.

He didn’t know what type of impact that song would have. He just followed his vision, worked on his craft, and chose words that captured visceral emotions.

You could also think of ancient yoga asanas we practice today or scenes from movies we reference.

Our creations take on lives of their own once we release them into the world.

That’s something to feel good about.

When you create, you never know who you’ll inspire

John Coltrane recorded a version in 1965 too.

And some of those music listeners may have heard the song for the first time, once a band or singer they resonated with covered it.

The original version evolved and spread because other artists saw the potential to perform the song in their own ways.

They had confidence in their abilities to take the song further — and that there would be value in creating a new version that would appeal to their audiences.

Recognize your potential, then realize it

As writers, we have to first recognize our potential.

Many people don’t know where to begin when it comes to translating ideas in their minds into cohesive sentences and paragraphs.

So if you want to make a living as a writer, you have to think in terms of using your communication skills to help others clearly convey their messages.

And here’s where I slightly burst the “feeling good” bubble … you also need to be more than “good.” You need to be strategic.

That’s how you help businesses use content to achieve their marketing goals.

That’s how your writing takes on a life of its own.

Inspire and be inspired

“I’m very happy to hear that my work inspires writers and painters. It’s the most beautiful compliment, the greatest reward. Art should always be an exchange.” – Nick Cave

We put time and energy into perfecting our visions because we know our creations are the birth of something.

It’s not our job to know all of the whys, whats, and hows of the future.

It’s just our job to do the work.

If you’re looking to level up from good to strategic …

Copyblogger’s Certified Content Marketer training is a powerful program that helps you attract better clients — and more of them.

New students will be able to sign up for a limited time soon, so join the waitlist to get all of the details when they’re available.

Stefanie Flaxman is Copyblogger’s Editor-in-Chief, and she talks on YouTube every week about how to stop feeling like you're a bad writer.

Previous article: The Content Marketer’s Guide to UTM Parameters for Tracking Referrals
Next article: Use These 4 Copywriting Pillars to Craft Kickass Presentations