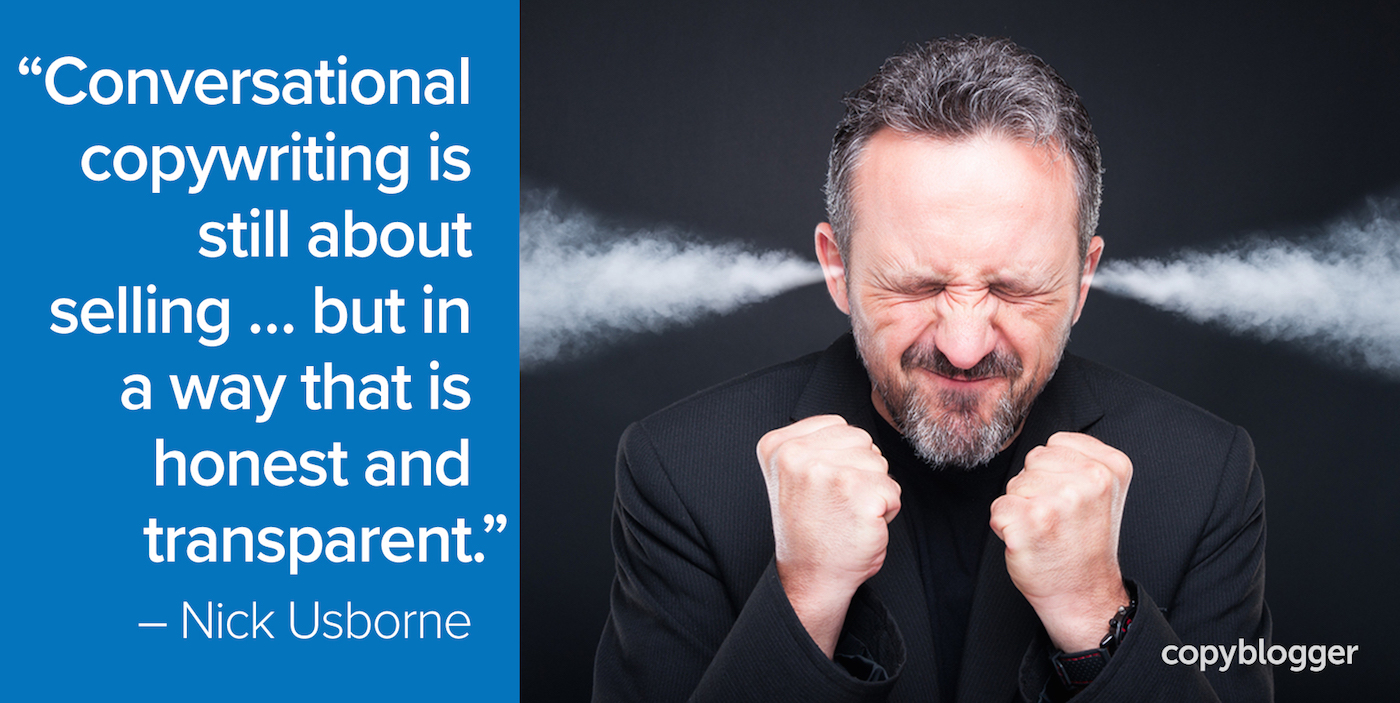 Before I get into what makes me scream, shout, and reach for hard objects to throw, let me be clear about my definition of “conversational copywriting.”

It’s a way of writing sales copy that sounds like one friend enthusiastically selling something to another friend.

Conversational copywriting is still about selling … but in a way that is honest, transparent, and respectful of your audience.

It’s the zero-hype, no-BS antidote to the hard-sell approach.

Truth be told, this has always been at the heart of the very best copywriting. It’s what made me fall in love with the craft when I got my own start as a copywriter in 1979.

You’ll find plenty of references to marketing with conversation in The Cluetrain Manifesto, published in 2000. Right up front, the authors state, “Markets Are Conversations.”

And if you’re a regular reader here at Copyblogger, you’re already familiar with conversational writing.

So why do I still find myself reaching for hard objects?

Because so many marketers and copywriters still don’t get it.

In no particular order …

Screamworthy Moment #1: “We do that already”

I’ll look at their sales pages and find that while they’re using conversational, chatty language, they’re still being manipulative scumbuckets.

Dressing up hard-selling, sneaky copy in chatty language does not qualify as conversational copywriting.

Conversational copywriting is as much about intent as it is about the language you use.

Or, I’ll look at their content or product information pages and find 50-word, compound sentences packed into 20-line paragraphs.

“But our readers are professionals!” Okay. See #3 below.

I don’t know where this idea came from.

Why does the “real thing” in copywriting have to be “sell at any cost, even if it means lying?”

I don’t buy that argument and never have.

Read some of the great print ads from the second half of the last century. Study ads written by David Ogilvy. Or the work of a couple of my own favorites from the 1980s: David Abbott and Susie Henry. Their copywriting was absolutely conversational.

(Get yourself a copy of D&AD: The Copy Book. It showcases dozens of great examples of old-school print copywriting.)

If you still get some pushback from clients about conversational copywriting being second best, buy them a copy of Conversational Intelligence by Judith E. Glaser. It’s packed full of the science behind why conversational selling works so well.

Here’s the neuroscience behind it:

If you sell too hard, your reader’s amygdala lights up like a Christmas tree. That’s the fight or flight part of the brain. The oldest part. The part that kept us alive at a time when we were on the menu for saber-toothed tigers.

When the amygdala lights up, all bets are off. You’re now perceived as a threat.

Take a less pushy and more conversational approach … an approach that signals you can be trusted … and the amygdala stays quiet, while the prefrontal cortex lights up.

The prefrontal cortex is involved in personality expression, moderating social behavior, and decision-making. It’s the “thoughtful” part of our brains. That’s the part of the brain you need to engage if you want to close the sale.

So no, I don’t buy the notion that being conversational is somehow second best.

Screamworthy Moment #3: “It doesn’t make sense to ‘dumb things down’”

When people ask me about this dumbing down thing … particularly with regard to B2B companies … I suggest they think about all of the English grammar exceptions that people use around the water cooler.

Imagine you’re a young intern at a “serious” B2B company. You go to your first meeting and struggle to understand what people are saying.

Why? Because they’re using a lot of jargon and industry-specific, in-house gobbledygook.

A kindly soul sees you struggling to keep up. Later, around the water cooler, he explains the key points to you. But just one-on-one, as part of a conversation.

That’s the conversational version of what was said in the meeting. Not dumbed down. Just a whole lot clearer.

This is the perfect fit for selling online

To me, the power of conversational copywriting is self-evident.

And it turns out that it’s also the perfect fit for the web.

After all, the web is by its very nature both social and conversational.

That’s what we do on the web, right? We use social platforms to get into conversations with others.

It’s what people do.

So we can join those conversations with our sales messages in ways that fit in, and are respectful of their attention.

It’s what fits. It’s what works.

Previous article: Struggling to Finish Your Blog Post? Try This Quick Editing Tip
Next article: Updated: A Breakthrough Resource for Your Content Creation