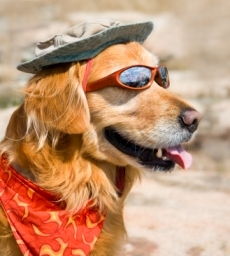 Years ago, I had a golden retriever named Louie who loved pillaging trash cans.

I tried yelling at him whenever he stuck his nose in the can. I tried different models of trash cans with hard-to-open lids. I tried putting the trash can inside a cabinet.

But it didn’t matter. Louie was a trash can fiend, and he wouldn’t be denied.

It got to be such a problem that I eventually called a dog trainer friend for advice.

She told me to put mousetraps in the trash cans.

After she reassured me that her method wasn’t going to harm Louie, I put a mousetrap in every trash can in the house. Then I forgot about it.

I was working in my office when I heard a SNAP in the other room, followed by the sounds of scampering toenails.

Seconds later, Louie came slinking into my office, his tail between his legs, and a betrayed look on his face. He never touched a trash can again.

The point of the story?

A few weeks ago, I gave you 10 of my best tips for getting inspired to write. They’re good ideas, ones that have worked for me in the past, and I think they’ll help you.

But sometimes 10 isn’t enough. Sometimes, you have an unruly muse who, like my golden retriever, refuses to be good, and you have no other choice but to call a knowledgeable friend and ask for more ideas.

Fortunately, I have another 10 ideas ready and waiting. One of these might just be the mousetrap that finally gets your muse to behave.

Ever browsed through a stock photography site like iStockphoto, looking for the perfect picture, but you just couldn’t find anything that . . . you know . . . grabbed you?

Well, try doing the opposite. Look at concept photos before you write the post, and then let the photo inspire you.

On iStock, you can type “concept” or “[your subject] concept” into the search box, and it’ll give you a selection of photos that represent different ideas. This is exactly how I came up with the idea for my The Courage to Be Wrong post.

2. Write a letter to your internal editor

I got this one from one of my college professors, and it sounds really weird, but here’s the idea. As writers, we all have a voice inside our head telling us our work sucks. Normally, it’s just a nuisance, but sometimes the voice is so loud that it overpowers your creative flow, making it impossible for you to write.

In those cases, here’s what to do: instead of trying to ignore it, confront it. Write a letter to your internal editor and tell him (or her) how irritated you are, how he’s ruining your career, and to shut the hell up. Really let him have it. Oftentimes, it’ll shock the little bastard into silence, and you can get back to work.

3. Use a pattern interrupt

I once met a painter who said that, whenever he is feeling bored with his art, he pulls out a peacock feather, sticks it in his pants like a tail, and goes back to work. It’s so strange, so wrong, that it always gives him a fresh perspective on the painting.

Before you go looking for feathers though, let me tell you the secret: it’s a principle from neurolinguistic programming called a pattern interrupt. Whenever a thought process isn’t working for you, one of the best ways to get unstuck is to do something really strange.

Throw water in your face, scream at the top of your lungs, dance around naked. People might think you’re crazy, but hey, you’re a writer. You’re supposed to be crazy.

4. Take a hit of caffeine

I know, it’s bad for you. Over the long run, it also robs you of more energy than it gives you.

But if you’re propping your eyes open with toothpicks, and you have to get a post done or else, I’m the last person to condemn you for needing a little pick me up. All of my best posts here at Copyblogger were conceived under the influence of Mountain Dew, and I’m convinced it’s eloquence in a bottle.

If you need it, I say drink it. Caffeine may be bad, but it’s far, far better than your best ideas dying inside of you because you couldn’t stay awake in your chair. Just my opinion.

5. Get off your butt

Whenever you’re feeling stuck, the worst thing you can do is sit at the computer and try to grind it out. You’re far, far better off getting up and walking around. Movement creates a sense of energy, and it can help you get your creative wheels turning when you just can’t figure out how you want to approach a post.

Personally, I find pacing in circles to be the most helpful because it requires no conscious thought, and I can concentrate on the problem at hand. Taking a walk can also work, especially if it’s a path you know well.

The longer I write, the more I realize it’s largely an unconscious process. You could be taking a shower, washing the dishes, sleeping — regardless of what it is, your mind is ticking away in the background, figuring out what to say and how to say it.

Sometimes though, our minds are so cluttered that we can’t hear our intuition, and when that happens, writing is a struggle. The only way I know to solve it is to sit still and meditate, deliberately quieting your mind and doing your best to listen instead of think.

Many times, a fully developed idea will just pop into your head, and you’ll know exactly what to write and why.

The next time you’re struggling for post ideas, try browsing through your blog archives for a few minutes, rereading old posts.

If you’re anything like me, you’ll always have a different perspective now than you did then, and the old posts will bug you because they are a little outdated. You’ll see points you should have made, metaphors you should’ve used, nuances you should have noticed. All of which make great fodder for follow-up posts.

Sometimes, the best way to get inspired is to write a good, old-fashioned rant. In your mind, conjure an image of someone who said, did, or believes something idiotic, and then start writing what you would like to say to them.

Sure, it’ll be angry and condescending. Sure, you’ll probably go a little too far. Sure, you’ll need to edit it before publishing it to the world.

But who cares? Writing great prose has a lot less to do with mechanics than it does with figuring out how to get your blood boiling and then having the courage to put your passion into words.

If writing a rant helps you do that, go for it.

9. Let other artists charge you up

Creativity is contagious. Whenever you feel like your batteries are drained, find another artist doing their thing and just watch them for a while. If they’re good, something about it will charge you up, and you’ll want to get to work.

Personally, I like to watch reruns of Fox’s So You Think You Can Dance. The show has nothing to do with writing, but the dedication of the dancers, the beauty of the choreography, and the emotion of the moment are so inspiring that I can’t help wanting to emulate it in my work.

For you, it may be something else. Whatever it is, find it, and set aside the time to let it inspire you.

Let’s get down to the real answer, shall we?

I’ve never heard of anyone who worked a boring job, came home to a boring family, watched three hours of boring television, and then proceeded to write something of spellbinding greatness. It just doesn’t happen.

Here’s why: your writing is an extension of who you are.

The difference between a legendary writer and a merely good one isn’t mechanics. It’s intensity.

Train yourself to find that intensity, and you’ll never lack for inspiration again.

Previous article: 6 Steps That Get Big Shots to Answer Your Email
Next article: The Solution for Marketing Overwhelm