We’re coming up on seven years since I started Copyblogger. That alone is hard for me to wrap my head around, and yet … here we are.

Since day one, it’s been about content. Not just words that fill up a webpage, but valuable information that attracts attention, drives traffic, and builds businesses.

But there’s another thing Copyblogger has always been about, and that’s the people who create the content. For the most part, especially for us, that means writers.

The last several years (and especially 2012) you’ve heard a lot about content marketing. Some might say too much, but trust me, it’s not going away. We won’t go back to straight pitches, clever commercials, and filler website copy after being offered strategic content with independent value – the Internet-empowered prospect won’t tolerate it.

On the other hand, there hasn’t been as much celebration of the people who create the blog posts, white papers, video scripts, and infographic copy. That’s about to change, especially around here.

2013 will mark a shift in both the perception and the fortunes of Internet-savvy writers. Here are three big reasons why the writer runs the Internet show:

Content marketing isn’t a buzz phrase, and it isn’t a fad. Rather, people are starting to realize that content is the foundational element of all effective online marketing. This is very good news for writers.

From the allure of building a direct relationship with prospective customers and clients, to smarter pay-per-click strategies, to social media sharing, to SEO – content is what works.

The increased demand for talented content creators means compensation and respect for the writer will rise … as long as you understand and assert your own value in the marketplace. Don’t worry, we’ll keep reminding you, and giving you smart tips for staking the claim of your choice.

But it hasn’t stopped there. Now who creates the content, and who does the linking out matters – which is why Google wants to know who you are via your Google+ authorship profile. What’s been dubbed Author Rank has the potential to be the biggest algorithmic signal for SEO since the hyperlink itself.

The days of lame anonymous content are over. Even better, rock star writers with demonstrated success and strong social followings will command the highest compensation and equity positions.

So, the rest of the business world might start to realize just how much great writers are worth. Well, a lot of writers have already realized it, and have clued in to the fact that they don’t need a job, or perhaps even clients, to succeed at doing what they love.

The boom in online content marketing will drive thousands of writers to control their own destinies. Not just as in-house staff or freelancers, but as owners of consulting firms and agencies.

Add to that the self-publishing boom with ebooks and other digital goods, and the writer truly can run his or her own show. Some might even start software companies. 😉

Here at Copyblogger, we finally feel like the rest of the world has caught up with us, and more importantly, you.

Content makes the Internet work, but without the writers and other content creators, it wouldn’t happen at all. Never forget that, and never underestimate how much you’re worth in this brave new world of a content-driven, convergent medium.

So, we’ve got big plans for our favorite people next year. Here’s a slight teaser before we wish you happy holidays, and the very best to you and yours in 2013. 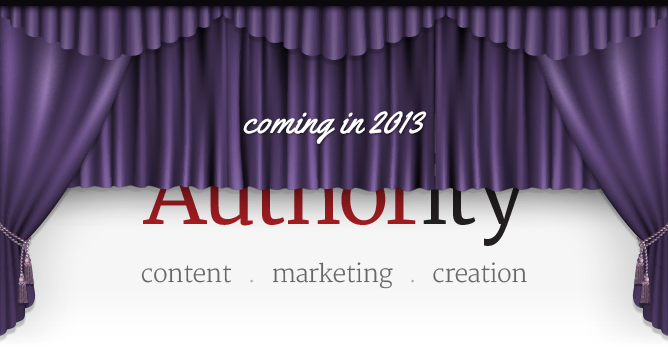 Previous article: The Best of Copyblogger in 2012
Next article: How to Become an Influential Writer in the Age of Author Rank