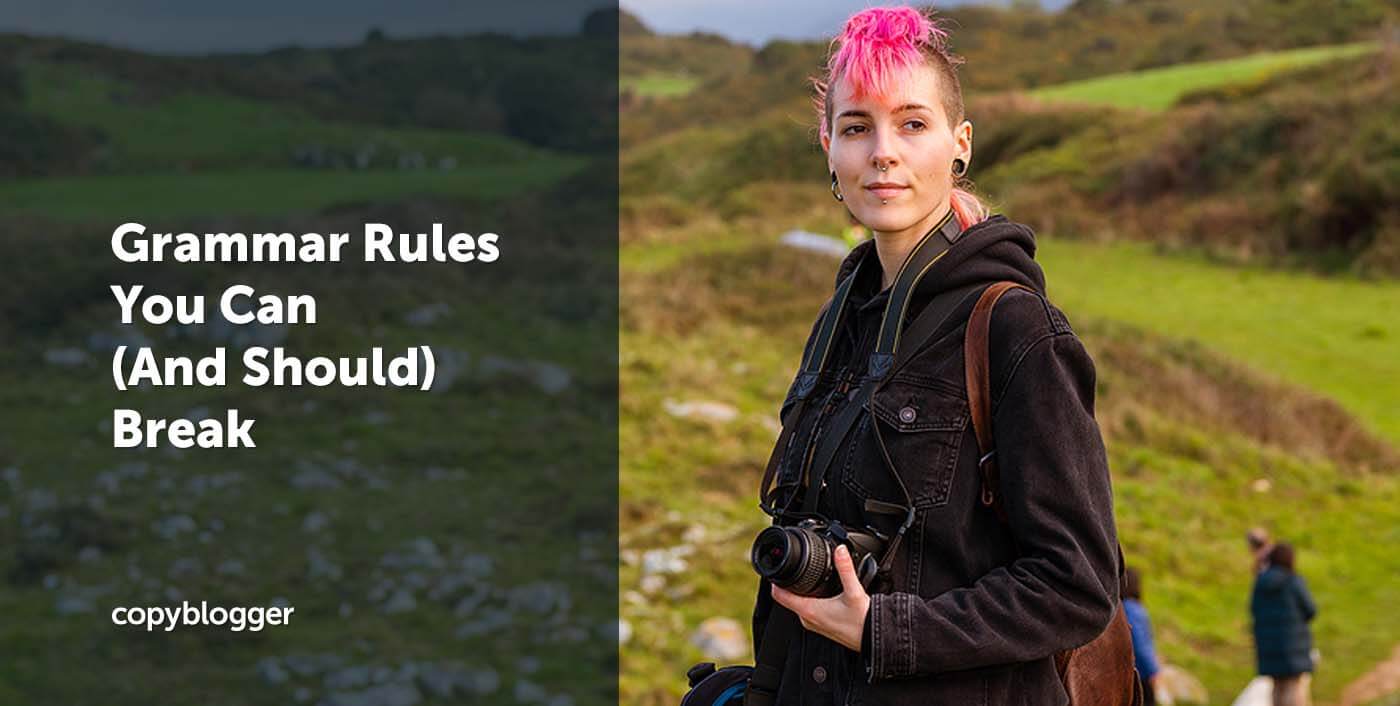 Grammar rules that are often broken can make writers uncomfortable. For good reason. We don’t want to sound like complete idiots when we write. After all, clarity in communication is a good thing. A virtue, even.

However, that’s not to say that all grammar rules are written in stone. In fact, some of them seem to be the work of rabid grammarians, who gleefully enforce confusing syntax and awkward construction in the name of “proper English.”

To heck with that, I say. Instead, we can embrace some common grammar mistakes.

Know the rules in order to know when to break them

Breaking rules unintentionally is where we can get into trouble as writers. Careless mistakes can distract readers and lead them to dismiss our messages.

Once you’ve learned proper grammar rules, you’re in a much better position to break them for the sake of your audience. Because knowing your audience is arguably more important than grammar.

If some broken grammar allows your main point to effectively reach your reader, then it was a good choice. The concept of clarity in a fast-paced, digital space is much different from the past when writing only existed in print.

For example, you can break rules about how to present numbers in the interest of clarity. Some of the best headlines have numerals and email subject line tips often recommend numbers because they’re much more eye-catching.

Feeling pumped to tap into your inner rebel? Here are seven grammar rules that were made to be broken.

1. Ending a sentence with a preposition

Many people, in an effort to keep from ticking off the Grammar Police, start twisting their sentences around so as not to end them with prepositions.

Unfortunately, more often than not, the new syntax is terribly awkward and painful to read. A big part of writing copy is showing your personality through words. How can you do that when you’re twisting your phrases to suit some archaic rule?

In the interest of readability, it’s quite all right to end a sentence with a preposition — even if Grammarly gives you a hard time about it.

Example: I have no idea where this grammar rule came from.

Somebody, somewhere, once decided that you shouldn’t begin sentences with conjunctions. Maybe it was an overzealous teacher who thought her students were doing it too much. My guess is that it was frustrated mothers who got sick and tired of hearing their children start every single sentence with “But Mo-om!”

The rule even got screen time in the movie Finding Forrester, when Sean Connery and Rob Brown have an entire conversation about it (and deliberately start their sentences with the offending words in order to make their points).

Regardless of how it began, you don’t have to stick with it in order to have good writing skills. It’s perfectly all right to start your sentences with “and” or “but.” It’s one of the best attention-grabbing techniques.

Example: But, as in all things, take this rule in moderation.

How often have you heard that you’re not allowed to let another word come between “to” and its verb? Some people hold that construction with the same reverence as is typically given to marriage: that which the writer hath wrought together, let no man tear asunder.

Except that it’s really not that big of a deal, especially when you need to know how to write articles fast. If it sounds better to split the infinitive, then take an axe to it! This is one of the most popular grammar rules that are often broken.

Example: … to boldly go where no man has gone before.

Traditionally, a single individual would be represented by a singular pronoun. This included choosing “he/him/his” or “she/her/hers” to refer to an individual. The words “they/them/their” were appropriate for multiple people.

Now, “they” is accepted as a gender-neutral pronoun that can be used interchangeably with “he” or “she.” Plus, when your text refers to a singular person whose gender isn’t specified, it’s stronger to opt for “they” rather than the wordy phrase “he or she.”

Example: When a new writer gets an assignment, they might be nervous about making a grammar mistake.

5. Placing “an” only before nouns starting with vowels

It’s easy to remember that you use “an” before nouns starting with vowels, but there are other instances where using “an” instead of “a” sounds better.

You always want to keep your reader in mind, rather than precisely follow rules that have a number of exceptions. Reading your draft out loud helps identify the spots where “an” is the best word choice, even if the following word doesn’t begin with a vowel.

Example: We arrived at the office an hour before the appointment.

The big idea here is that proper sentences help you create a cohesive piece of writing that a reader can easily follow. However, the quality of your content won’t be ruined if you intentionally use sentence fragments to make your writing more conversational.

Example: When you’re hyper-creative, a lot of your ideas will be rejected. By readers. Listeners. Viewers. Clients. Customers. Supervisors. Business partners …

Grammar rules that are often broken typically include writing one-sentenced paragraphs. You were taught not to do it growing up, but they can be highly engaging online.

Example: Just do it.

Don’t cling to the ancient rules just because your high school English teacher told you to. Be a rebel and break free from these nonsensical shackles!

Michelle Pierce is the editor-in-chief (and word ninja) for Aqua Vita Creative, and she is very picky about spelling, grammar, and punctuation. She would like to remind the entire Internet that there is no "a" in "definitely."

Previous article: How to Write an About Me Page that Inspires Readers and Grows Your Business
Next article: 5 Ways to Write a Damn Good Sentence