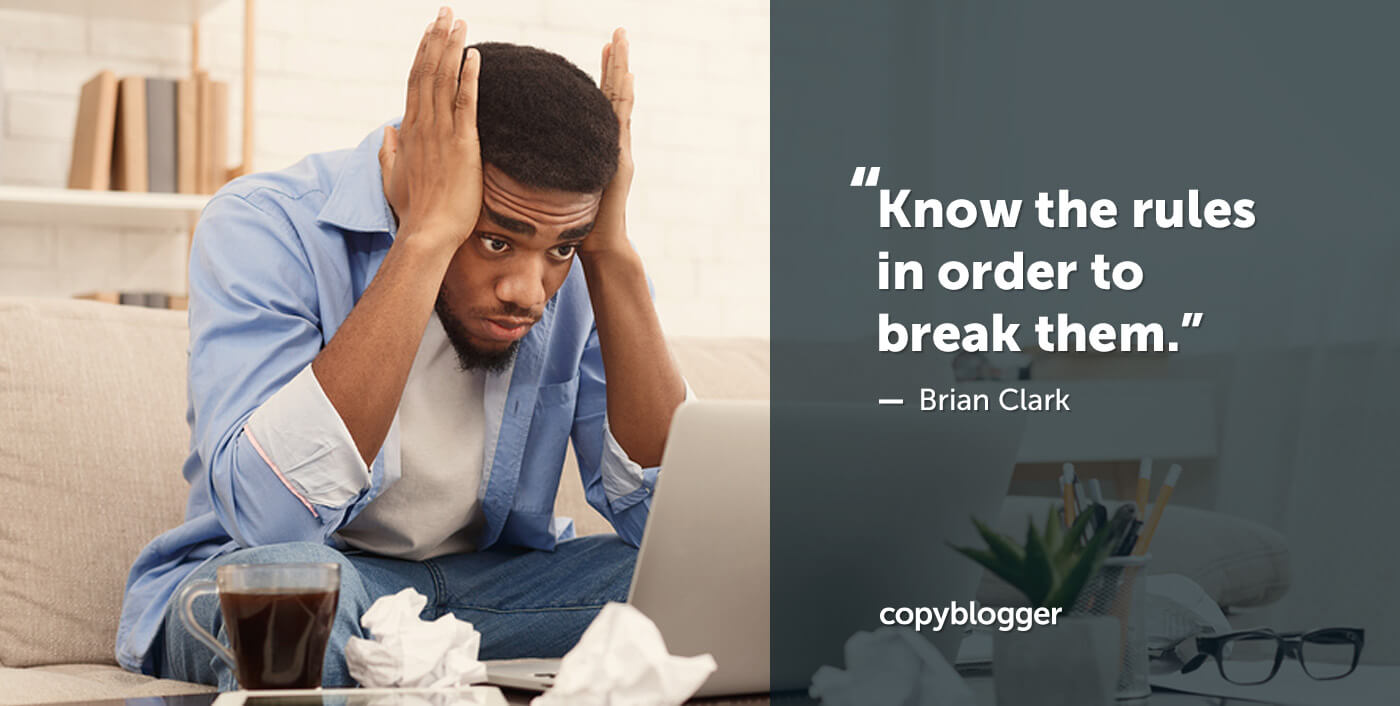 It’s time to review some common grammar mistakes that damage our credibility. Not normally a fun task, but absolutely necessary.

I promise to keep you amused to diminish the pain (or at least I’ll give it a shot).

I also feel compelled to mention that copywriting and blogging should be conversational and engaging, and breaking formal grammatical and spelling conventions can often be a good thing.

Outside of specific professional or academic contexts, colorful writing that makes it easier on the reader is more important than pleasing Strunk and White.

That said, I also believe you have to know the rules in order to break them. Plus, there are some errors that you’ll never convince anyone you did intentionally in the name of style (outside of a joke), and even then some people will still assume you’re dumb.

So, let’s take a look at some of those types of glaring errors you never want to make — common grammar mistakes that can diminish the shine and credibility of your message.

This one drives a lot of people crazy, including me.

In fact, it’s so prevalent among bloggers that I once feared I was missing something, and somehow “loose” was a proper substitute for “lose” in some other English-speaking countries.

If your pants are too loose, you might lose your pants.

One of the most common causes of grammatical pain is the choice between “me” and “I.”

Too often people use “I” when they should use “me.” Since “I” sounds stilted and proper, it must be right, right? Nope.

The easy way to get this one right is to simply remove the other person from the sentence and then do what sounds correct.

You would never say “Give I a call,” so you also wouldn’t say “Give Chris and I a call.” Don’t be afraid of me.

And whatever you do, don’t punt and say “myself” because you’re not sure whether “me” or “I” is the correct choice. “Myself” is only proper in two contexts, both of which are demonstrated below.

Many consider Chris a punk, but I myself tolerate him. Which brings me to ask myself, why?

This one on our list of common grammar mistakes slips under the radar a lot, and I’ll bet I’ve screwed it up countless times.

It boils down to the fact that things are logically different from one another, and using the word “than” after “different” is a grammatical blunder.

This vase is different from the one I have, but I think mine is better than this one.

4. Improper use of the apostrophe

Basically, you use an apostrophe in two cases:

If still in doubt, leave the apostrophe out. It causes more reader confusion to insert an apostrophe where it doesn’t belong than it does to omit one.

Plus, you can always plead the typo defense if you leave an apostrophe out, but you look unavoidably dumb when you stick one where it doesn’t belong.

Back when I talked about how to write bullet points, one of the tips involved keeping each bullet item in parallel by beginning with the same part of speech.

For example, each item might similarly begin with a verb:

When writing a list of items in paragraph form, this is even more crucial, and failing to stay in parallel can result in confusion for readers and scorn from English majors.

Do you see the problem? If not, break the list into bullet points and it becomes clear:

Over the weekend, Kevin:

Stick the word “ordered” in front of “two software programs” and you’re in parallel. Your readers will subconsciously thank you, and the Grammar Police won’t slam you with a citation for one of these common grammar mistakes.

As antiquated as they might seem, these two little Latin abbreviations are pretty handy in modern writing, but only if you use them correctly.

The Latin phrase id est means “that is,” so i.e. is a way of saying “in other words.” It’s designed to make something clearer by providing a definition or saying it in a more common way.

The Latin phrase exempli gratia means “for example”, so e.g. is used before giving specific examples that support your assertion.

Please don’t do this:

I should of gone to the baseball game, and I could of, if Billy would of done his job.

I should have gone to the baseball game, and could have, if Billy had done his job.

Why is this one of our common grammar mistakes?

They could’ve, should’ve, would’ve been correct, except that the ending of those contractions is slurred when spoken.

This creates something similar to a homophone, i.e., a word that is pronounced the same as another word but differs in meaning, e.g., of, which results in the common grammar mistake of substituting of for have.

When you’re deciding whether to use this or these, there are a couple of things to keep in mind.

This helps you reference or point out something. What you’re referencing or pointing out is likely going to be singular, but the concept can be general.

In common grammar mistake #7 above, I used this twice. First, to preface an example, and then to reference a statement I just made.

You’ll only use these if you’re referencing plural nouns:

These avocados look ripe. Or, these documents need your signature.

This would be correct if the noun you’re pointing out is singular:

This bird keeps flying by my window.

Associating this with singular nouns and these with plural nouns will guide you in the right direction.

9. Proper grammar for from this to that

Now that we know this is for referencing singular nouns, it’s easier to explain when to use that.

You’ll need to know the proper grammar for from this to that if you’re considering different options.

We could go this way or that way home.

That helps you distinguish between two or more singular nouns. You’ll go from this to that if you need to discuss more than one possibility.

Affect and effect are often confused, but one is a verb and the other is a noun.

The verb “affect” describes something that “manipulates or causes a change.”

An emotional piece of news may affect how you feel after you hear it.

The noun “effect” refers to an “outcome or result.”

If you associate “special effects” in movies with “effects,” you’ll remember that “effect” should be used as the noun to describe an outcome.

For instance, at Copyblogger we use the Oxford comma, which means we include a comma before “and” when we are about to conclude a list:

Make sure to pick up milk, bread, and eggs from the grocery store.

Even though there are different schools of thought regarding whether or not to use the Oxford comma, when you want to write a good sentence, you do always need to use commas to separate the multiple items you reference in a list — it’s just proper punctuation.

Confused about commas? Check out this article: How to Use a Comma

And if you’re looking for more practical writing lessons that help you overcome common grammar mistakes, don’t forget to subscribe to Copyblogger below to get updates every week.