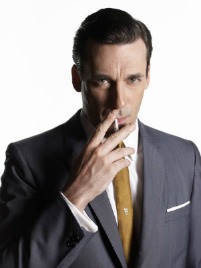 Every writer and marketer could learn a thing or two from Don Draper — the anti-hero of AMC’s hit series Mad Men, which is set in the swinging 60s world of advertising.

Born from dirt, Don is a verbal Superman who uses his unique outlook on life to articulate his way into influence, money, and creative success.

Isn’t that the recipe all us marketing raconteurs are looking for?

Don is marble-handsome, but his steely stare and flawless assembly of words are what allow him to own every conversation with an eyebrow’s worth of effort.

Learn to use your words as well as Don Draper, and you, too, can articulate your way into influence, money, and creative success.

Let’s start with some of Don’s thoughts, from advertising to what women truly want.

Advertising is based on one thing: happiness. And do you know what happiness is? Happiness is the smell of a new car. It’s freedom from fear. It’s a billboard on the side of a road that screams with reassurance that whatever you’re doing is Okay. You are Okay.

Done well, advertising sends a whisper to your impulses — a primal wind at the back of your neck, suggesting where to go and what to do.

Flashy advertising works, but its half-life is dim. Make people feel something, especially happiness, and they will remember and act. Bonus points if your happiness solves their sadness.

Nostalgia literally means the pain from an old wound. It’s a twinge in your heart far more powerful than memory alone. This device isn’t a spaceship, it’s a time machine. It goes backwards, and forwards … it takes us to a place where we ache to go again. It’s not called the wheel, it’s called the carousel. It lets us travel the way a child travels — around and around, and back home again, to a place where we know we are loved.

We all long for the way we were. Even the most adventurous among us craves the sublime comfort of the familiar.

Many writers and marketers understand this human need, but Don tumbles the thought by reminding us that true nostalgia isn’t a deep longing for the past so much as an affectionate feeling for a future that feels like a friend.

When Don’s firm, Sterling Cooper, loses their largest account — Lucky Strike Cigarettes — the partners and foot soldiers in the firm run around in circles.

Don turns the tables, proudly declaring his firm will only do business with those companies unwilling to put their consumers at risk. Not only does this save Sterling Cooper from being the laughing stock of Madison Avenue, it pushes them ahead of the trends.

When a man walks into a room, he brings his whole life with him. He has a million reasons for being anywhere; just ask him. If you listen, he’ll tell you how he got there. How he forgot where he was going, and that he woke up. If you listen, he’ll tell you about the time he thought he was an angel or dreamt of being perfect. And then he’ll smile with wisdom, content that he realized the world isn’t perfect. We’re flawed, because we want so much more. We’re ruined, because we get these things, and wish for what we had.

People tend to dilute their regret or justify previous behavior. We are all slaves to habit, most of the time. When writers stoke the fires that make us feel remorse or reprieve, we are willing to answer with our wallets.

Just so you know, the people who talk that way think that monkeys can do this. They take all this monkey crap and just stick it in a briefcase completely unaware that their success depends on something more than their shoeshine. You are the product. You — feeling something. That’s what sells. Not them. Not sex. They can’t do what we do, and they hate us for it.

Sex does sell, but it isn’t just the flesh. Sex also sells because of associated triggers; being loved, needed, wanted, satisfied. Great writers draw pictures with words, rendering memory permanent with a stroke of a key. It isn’t easy. Those writers who dig deepest strike the oil.

Just think about it deeply, then forget it … then an idea will jump up in your face.

Any writer or creative type can relate to this.

How often have you struggled over the perfect sentence, argument, or string of dialogue? You can’t beat your muse into submission. Brilliance needs space to breathe.

Take a break from the unfinished page, and you will likely find that your idea has grown stronger in your mental absence.

Big lightning bolt to the heart — you can’t eat, and you can’t work, and you run off and get married and make babies. The reason you haven’t felt it is because it doesn’t exist. It was invented by men like me, to sell nylons.

That was Draper at his most cynical, but I don’t think he believes a word he’s saying. It’s just his way to justify cruel behavior, carelessly waged against his wife.

Yet it’s amazing to view as a fly on the wall. Don always thinks like a marketer, even when he’s only selling to himself.

Jacqueline Kennedy, Marilyn Monroe. Women have feelings about these women because men do. Because we want both, they want to be both. It’s about how they want to be seen by us, their husbands, their boyfriends, their friends’ husbands. Here’s the idea, very simply. The bra is called ‘the Harlequin.’ In fit and form, it should be your very best. It comes in black. And white. Jackie. Marilyn. Same incredible fit, two different women. And the beauty of it is, it’s the same woman. Same model.

Our desires aren’t consistent, yet it’s the inconsistency that makes us human.

How can anyone want two entirely different things at the same time? It doesn’t matter; smart marketers understand that basic human nature doesn’t change, so they highlight a solution rather than digging for an answer.

Success comes from standing out, not fitting in.

Look around at the people you admire most. Whether online or off, those truly blazing their own trails and creating freedom for themselves are marching to their own beat.

An echo is never as steady or strong as the original shout. Be unique, and do what you do better than anyone else. The world will hear you.

Listen, I’m not here to tell you about Jesus. You already know about Jesus. He either lives in your heart or he doesn’t. Every woman wants choices, but in the end, none wants to be one of a hundred in a box. She’s unique. She makes the choices and she’s chosen him. She wants to tell the world he’s mine. He belongs to me, not you. She marks her man with her lips. He’s her possession. You’ve given the gift of total ownership.

Even when selling lipstick, Don knows what makes us tick. For a woman in the early 60‘s, it was knowing she could be the lingering memory inside her man’s mind. A dozen colors are great, but a woman would open her wallet for the promise of possession.

Don’s brilliance with words does nothing to keep him from weaving a thick web of compulsive lies and regular infidelity.

That’s what makes Draper interesting — he’s the type of guy who sets and baits his own trap, and steps in with both feet.

Don’t follow all of Don’s examples. (I wouldn’t recommend the Don Draper Guide to a Satisfying Marriage, for example.) But embracing his advertising insights will make you a better writer and marketer, and help you articulate your way into influence, money, and creative success.

Our Premise Landing Page System for WordPress manages all the heavy lifting when it comes to turning traffic into money:

Find out more about Premise here.

Previous article: Copyblogger Weekly Wrap: Week of May 16, 2011
Next article: What 8 Best-Selling Magazines Can Teach You About Irresistible Content