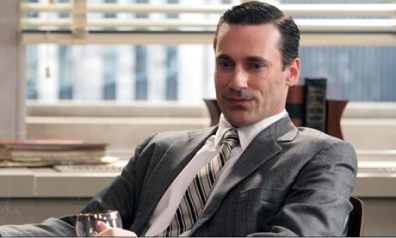 Donald Draper is dark and moody and mysterious in all the right ways. He’s powerful, able to send staff scurrying from his office with a scowl.

And he’s a creative genius too, lounging on his office couch, sipping whisky, and crafting the perfect slogan to capture the minds of America.

He makes it all look so freaking cool.

All of them do. Peggy, Don, even Roger, who does nothing these days but loaf around and spit out hilarious one-liners.

It’s not just them. It’s their work.

They sit around thinking up the perfect ad.

Then they convince their clients to spend beaucoup bucks on it. Millions of people fall all over themselves to buy the product, shifting consumer culture, spawning billion-dollar industries, becoming household names.

And they do it all with nothing but words. How cool is that? You write something down, publish it, and it changes the world.

Then again, maybe it’s more familiar than you think. Let’s go through some of the quotes from the show, and I’ll show you how some of the principles apply just as much to blogging as they do advertising.

A slogan’s nothing when you have a good idea.
~ Peggy Olsen

Hang around any type of professional writer, and you’ll notice that they’re all prodigious collectors of ideas. They’re constantly reading, listening, and watching for that next big “Aha.”

They know that once they find it, packaging it is easy. They can wrap it up in a slogan, headline, or a domain name in a matter of minutes.

Amateurs do it the opposite way. They worry so much about their domain names and headlines and slogans that they never get around to finding truly great ideas.

The truth is, all of those things are just wrapping paper. It’s the gift inside that counts.

Focus on finding the big idea, and the rest will take care of itself.

A new idea is something they don’t know yet, so of course it’s not going to show up as an option.
~ Don Draper

So where do you find great ideas for your writing?

It’s tempting to look around your niche and think, “Everything important has already been said. What else is there?”

Well, nothing, of course, but that’s the point. Great ideas aren’t just lying around, waiting for you to use them. You have to search for them.

You have to read books. You have to listen to people. And yes, you can even get inspiration from watching television.

The key is doing the work. The ground may be full of buried treasure, but you have to be willing to grab a shovel and start digging.

Sure, it’s hard, but if you’re willing to do it, you’ll never have a shortage of great ideas. Really, there is an ocean of them down there, waiting for you to tap into.

I’ll never get used to the fact that most of the time it looks like you’re doing nothing.
~ Roger Sterling

When you’re a writer, sitting by the pool and reading a book is all part of your job.

Sure, it’s relaxing. Sure, you enjoy it. Sure, you might feel a little guilty about it.

But if you stop, what happens? I’ll tell you: your creativity will dry up, your work will get stale, and you’ll lose your edge.

So, stop being ashamed of it.

Personally, I spend about 3-4 hours per day watching television, reading books, and listening to NPR. On average, I also stare into space for about 1-2 hours, just thinking.

If anyone asks what I’m doing, I say I’m working. Because I am.

Sometimes it’s hard to convince your brain of it, but fear is a good thing.

How many stories have you heard of entrepreneurs who were dead broke and had to build a successful business or they would starve to death? It’s not a coincidence.

For every day you don’t write 1,000 words, agree to donate $100 to a political party you despise. If you can’t find the time for your online business, turn in your resignation at work. If you can’t wake up in the morning, deliberately schedule meetings for 8 AM, so you have to get up.

But that’s what makes it so powerful.

You wanna be on some people’s minds. Some people, you don’t.
~ Roger Sterling

Have you thought about who you want reading your blog?

And perhaps more importantly, have you thought about who you don’t want reading it?

You probably know that you can’t please everyone, so you shouldn’t even try, and while that’s true, this takes it a step further.

They publish posts intentionally designed to annoy them. They ignore their emails. They respond harshly to their comments.

To some extent, it’s about focusing your attention on the people you can help. But it’s also about shaping your tribe. No one wants to be a part of a group anyone can join.

By excluding the wrong people, you make the experience more precious for the right people. No, it’s not always pretty, but that’s the way we humans work.

People were buying cigarettes before Freud was born.
~ Don Draper

Pop quiz. Which is better:

If you chose B, congratulations. You chose correctly.

Without even realizing it though, most people choose A. They start a blog about a subject they want to write about, and then they use every psychological trick in the book to get people to read it.

And sometimes, it works. If you’re a good enough marketer, you can prop up any blog or product, no matter how bad it is.

But why go through the trouble?

People don’t buy cigarettes because of the marketing. They buy them because they’re addicted. Cigarette companies are obliged to finance millions of dollars on marketing campaigns to convince people to stop smoking, and yet they continue to make billions of dollars anyway.

On the one hand, it’s horrifying, but on the other, it’s just smart business. The best type of product is the one people can’t stop buying.

Can you say the same of your blog? Is your content so important they can’t stop reading?

You’re not good at relationships because you don’t value them.
~ Roger Sterling

I’m sick and tired of marketers who see social media as nothing more than a way to score free traffic.

But eventually, it falls apart. Always.

You have to value them. You have to treat them well. Horror of horrors, you might even have to bring yourself to like them.

Because if you don’t, they’ll leave.

The next time you sit down to write a blog post, envision a stadium full of people. See yourself standing in the middle of them. Feel the anxiety in your stomach, as you get ready to perform.

And then ask yourself: what can you possibly say that would be worthy of the attention of more than 100,000 people?

Whatever it is, that’s what you should write. Nothing else.

Advertising is based on one thing: happiness.
~ Don Draper

If you want a big audience, focus on one thing: making your readers happy.

Sure, writing killer content is a part of that. So is building relationships.

You might even say selling people products that improve their lives is a way of delivering happiness, too.

But it’s easy to lose sight of it. You can get lost in sharing your expertise, tinkering with the technology, or writing something you enjoy.

All of that’s important, sure, but none of it’s going to turn people into raving fans, faithfully reading and talking about your blog for the rest of their life. To get that kind of reaction, you need to write posts that touch people.

Do that, and you won’t have to search for readers. They’ll search for you. You’ll boot up your computer one morning to find thousands upon thousands of them waiting for you, ready to listen, ready to learn, ready to launch into action.

And that’s when you’ll realize: you’re not just a writer anymore. Word by word, sentence by sentence, paragraph by paragraph, you’re changing the world.

Maybe you’re like Don, lying on a couch, sipping a glass of bourbon, or maybe you’re not. Either way, you gotta admit…