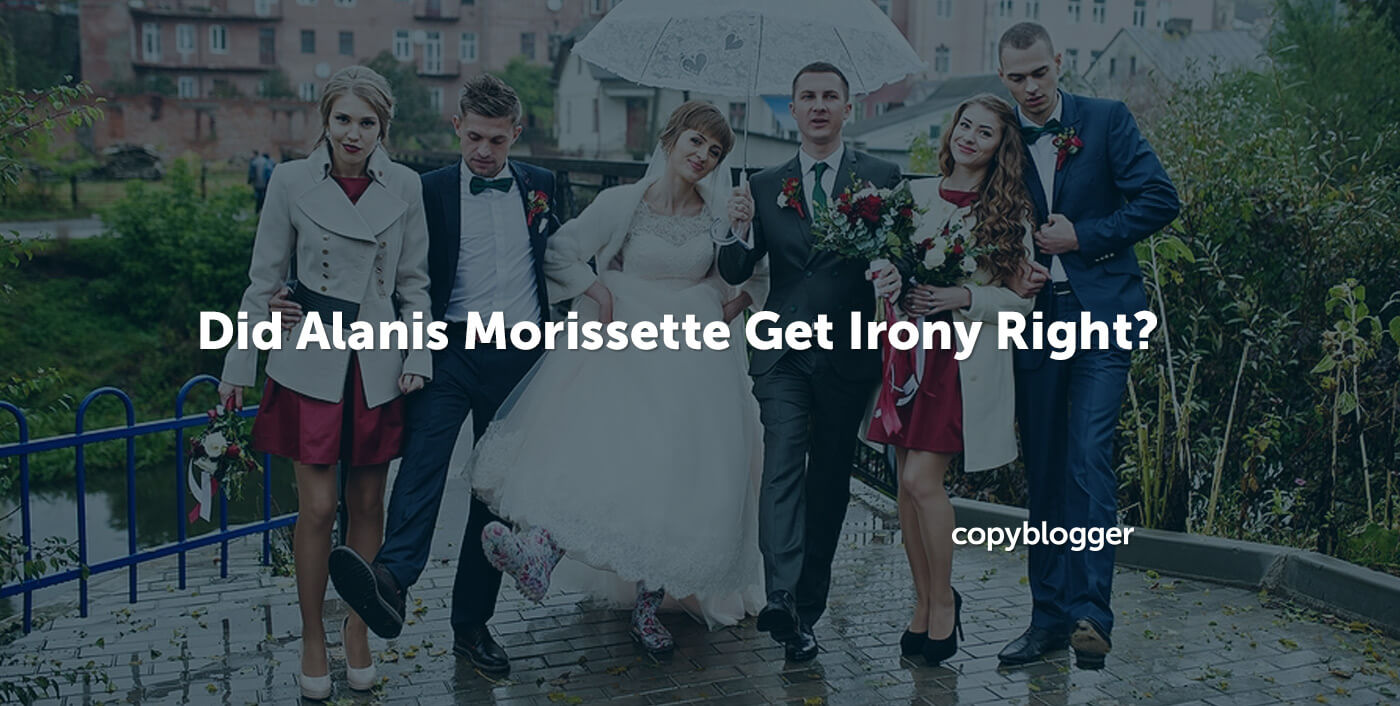 Many people struggle with irony in their writing, despite the media fable that everyone born after 1965 lives a life so deeply entrenched in irony that we can’t handle a direct assertion.

Many bloggers are sarcastic and snarky (nastier forms of irony generally intended to deride a specific person) simply because it’s an easy substitute for a fully developed writer’s voice.

Irony is a bit more subtle, and that’s why it can cause people trouble.

When it comes to “not getting” irony, there’s one person who comes immediately to mind for many — Alanis Morissette. More than two decades later, her hit song “Ironic” from the 1995 album Jagged Little Pill is still the punch line of scores of irony-related jokes.

If you’re not familiar, Morissette’s song describes various life situations followed by the two questions “Isn’t it ironic?” and “Don’t you think?”

The perceived problem with the song is that most, if not all, of the given examples do not constitute either situational or literary irony.

“A traffic jam when you’re already late
A no-smoking sign on your cigarette break
It’s like ten thousand spoons when all you need is a knife
It’s meeting the man of my dreams
And then meeting his beautiful wife
And isn’t it ironic … don’t you think?”

Well, no. Those are unfortunate situations, but they are not typically what one would define as ironic. Which leads critics to claim that Alanis Morissette’s “Ironic” isn’t actually ironic.

Ten thousand spoons when all you need is a knife in the employee break room of a Henckels cutlery factory … now that would be ironic.

He went on to lament a lack of understanding of irony in general, “like that idiot Alanis Morissette.” (Sounds like he thought Alanis needed to be taught how to stfu.)

“Alanis may not be so dumb after all. If you discount the argument that some of her examples qualify as ‘cosmic irony’ (which I think is rather weak), the song ‘Ironic’ is devoid of irony in any of the illustrations she offers.

“That, in and of itself, is ironic, and justifies the entire song from an artistic standpoint. Ms. Morissette may have been playing a wonderfully perverse joke on all of us on another level.”

I never heard back from the reader, so I’m guessing he didn’t like my theory. I decided to do a little digging to see if Morissette had ever validated that interpretation.

Here’s an Alanis quote about “Ironic”:

“For me the sweetest moment came in New York when a woman came up to me in a record store and said, ‘So all those things in ‘Ironic’ aren’t ironic.’ And then she said, ‘And that’s the irony.’ I said, ‘Yup.’”

One could certainly argue that Morissette simply recognized a saving grace and took it. Others might argue that the song does contain at least one or two examples of irony, which would invalidate the explanation.

Regardless, there’s a point for writers beyond the notion that Alanis Morissette’s “Ironic” isn’t ironic.

The point is this …

You may be absolutely brilliant, but if only really smart people and mystery lovers can figure out what you’re actually talking about, you’re a failure from a marketing standpoint.

This isn’t a problem for pop stars, but it’s something to think about when you approach your own blogging and copywriting.

Isn’t it ironic that a genius communicator is someone who can express things as simply and clearly as possible? Dontcha think?

Previous article: 21 Useful Keyboard Shortcuts for Writers
Next article: How to Write Like Hemingway