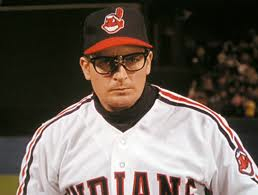 Unless you’ve been living without electricity for the last few weeks, you’ve no doubt witnessed what might be the biggest celebrity meltdown in the history of … EVER.

Charlie Sheen has skated along a downward spiral, going from the highest paid actor in television to an unemployed “winner,” ranting about conspiracies, tiger blood and Adonis DNA to anyone who will lend him an ear or microphone.

Though we don’t know how this epic tale of the Malibu Messiah will eventually end, and it’s difficult to discuss without delicate considerations for drug abuse and Sheen’s questionable mental state, believe it or not there are a few things we can learn from Sheen. Here are a few valuable branding lessons from this fiasco.

But there’s no denying some of Sheen’s antics can work wonders in the attention-seeking world of marketing — as long as you find the balance at the lip of Crazy Canyon without throwing yourself over the edge.

Charlie Sheen lives without apology, embracing his vices, making love to his weaknesses, and getting high on a drug called “Charlie Sheen”:

It’s not available because if you try it you will die. Your face will melt off and your children will weep over your exploded body.

This has tremendous appeal. Sheen attracts people who dig his free spirit, along with those folks who love to watch the crazy train as it threatens to derail.

Fine-tune your public persona. Amplify certain angles, exaggerate others, and create the YOU that’s most appealing for your market.

Never be a phony, but think of all the larger-than-life people you know — and how they present a side of themselves that’s fit for public consumption.

And if you happen to have Adonis DNA, by all means, don’t keep it to yourself.

Sheen turned his “Duh, winning” into a marketable catchphrase, already being screened and inked on a line of tee-shirts. And you can almost smell the popcorn of the upcoming movie screening.

Sheen took a phrase which was being used to mock him for his crazy rants and twisted it to his advantage, as though it was just another “torpedo of truth.”

Use your catchphrase in copy, video, and wherever else seems like a good fit.

One word of warning — it takes a special sort of personality to use a catchphrase without coming off like a phony.

Sure, Two and a Half Men wasn’t fine art, but it was a damned funny show. It was almost tailor made to Sheen’s public image, while glossing over it with a fine coating of lovable rapscallion, to make both the show, and its star, likable.

And while not everyone cares for that type of show or humor, you can’t be all things to all people.

Concentrate on what you do well, build your tribe around it, and make no apologies to those who “don’t get it.”

You can get away with a lot –- if you deliver

He showed up to work and did an impressive job on Two and a Half Men, delivering laughs and ratings to the Tiffany network.

Do something well enough and people will let you get away with a lot.

Be a rock star. Put yourself out there.

Say things that flip the status quo and shake every leaf from its tree. Wear glittery pants, if you want. Just make sure you’re damned good at what you do, and deliver on time.

Don’t trash the people you work for

This might prove to be the real reason Sheen got canned from Two and a Half Men.

Sheen went after show-runner Chuck Lorre with teeth bared and racist overtones; his vitriol spewing out and spilling over to other network execs.

People appreciate when you slaughter a few sacred cows. And you can always gather a heap of street cred saying the things others are afraid to say. But there’s an uncrossable line you must consider.

Level personal attacks, particularly against the people who can help you, and you can’t be surprised when they come back and bite you hard.

When CBS ceased production of Two and a Half Men, Sheen could have (and probably should have) quietly retreated to rehab, or laid low, and let things pass over.

But Sheen, being the firebomb thrower he is, went on the offense, lashing out at his bosses, and taking his particular brand of dementia to the airwaves and Internet, blistering critics with sound bites of awkward brilliance.

While this tactic got him fired, it also gave him a metric ton of buzz, and several rumored offers.

While Sheen alienated his bosses, his biggest misstep might be his egotistical rants where he declared himself a winner with tiger blood, while castigating others as whining sheep with ugly wives and children who were just jealous of his awesome life.

People will let you get away with a lot, but when you start insulting your customers (viewers in this case), taking them for granted and even looking down on them, you will fall out of favor – lightning fast.

Soon enough, people will root for you to fail fast and fall hard.

Everyone likes a story of losers turned into winners.

We all love stories of redemption. We like hope. It makes it easy to think, if “they” can do it, so can we.

Capitalize on that; share your story of how you overcame obstacles. People will root for you.

But be wary, because…

As much as we like to see people turn their lives around, there’s just as many people who take sheer delight in seeing people fall.

The more successful the person, and the bigger the fall, the better. Don’t let people get so familiar with you that they start to root against you.

Say what you want about Charlie Sheen.

Fact is, he’s got millions of people paying attention, eager to see what he’ll do next.

How many people are paying attention to your brand?

Want the winning without the train wreck? Subscribe to the free Internet Marketing for Smart People newsletter. We’ll help you turn that attention into a profitable business … without making an ass of yourself.

Sean Platt and David Wright help good writers make a great living. Get their free report, The 9 Mistakes Most Writers Make That Are Keeping Them Poor.