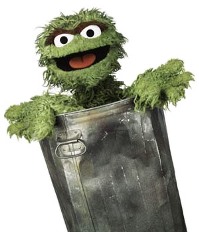 This week marked the 40th anniversary of the breakthrough TV program Sesame Street. I’ve written before about some of the many lessons you can learn from this cultural icon, but today I’m going to zero in something new.

You might have an Elmo blog, a Cookie Monster blog, or a Big Bird blog. (How you define those is up to you.)

But some of the smartest and most successful bloggers out there bear more in common with the show’s least-likeable character: Oscar the Grouch.

Oscar was an important character from the show’s beginning, and on the surface he doesn’t seem to quite fit in.

Everyone else on Sesame Street is pretty much cheerful and happy all the time. They have infinite patience, everyone loves children, and friendship is king.

Oscar, on the other hand, hates kittens, rainbows, and having a nice day. He loves anything dirty or dingy or rusty.

He was always my dad’s favorite character on the show, which annoyed me to no end when I was six. These days, I’m starting to see my dad’s point.

Oscar doesn’t want everyone to love him. (That would be his biggest nightmare, in fact.) He does his own thing, he lives the way he wants to live, and he’s not particularly interested in what anyone else has to say about it.

It would be easy to think that Oscar’s just one of those people who enjoy being unhappy, But actually, Oscar has a great life.

He has things set up just the way he likes them. He’s surrounded by trash, which is what he loves. His trash can home has the perfect dented patina that makes him happy.

Oscar’s not depressed or pathological. He’s just weird. He likes different stuff from most people. And he expresses himself without apology.

One of the things I love on Sesame Street is when the show pulls back occasionally to reveal the whole grouch community.

There are grouch restaurants. (Sandra Bernhard had a great cameo as a waitress in one, in the 1980s Sesame Street movie Follow that Bird.) Grouch taxi services. Grouch “dirtying machines” at the laundromat. Sesame Street is about as diverse as they come, and grouches are just one of the many groups they embrace.

Oscar seems like a loner, but actually he’s part of a larger community. There are dozens of grouches in trash cans living on Sesame Street, yelling at the kids and generally having a fantastic time.

It’s not about being a jerk

I’m about the last person who will ever tell you to be a troll, or a jerk for the sake of being a jerk.

Being a contrarian just to create controversy is hollow, and people see through it. Yanking people’s chains for its own sake doesn’t create anything useful. An audience might show up for the spectacle of you making a rude jackass of yourself, but they won’t follow through with any kind of loyalty or commitment.

Being an Oscar blogger isn’t about being a creep. It’s about doing your thing without apology, no matter how strange it looks to “normal people.” It’s about weird passions and showing the side most people are scared to reveal.

There’s an obvious downside to grouch blogging: you’re going to turn people off. In fact, you might very well turn most people off.

Plenty of people take one look at Ittybiz or The Bloggess and beat a hasty retreat. Those blogs aren’t for “most people.”

The people who remain are fanatically loyal, almost to the point of obsession. It’s precisely because so many people hate it that their audiences love it. This also works for Dan Kennedy, Ricky Gervais, and Ty Cobb. (I defy you to find that combination anywhere else on the internet.)

What to do if you aren’t a grouch

If you’re not a member of the grouch community, there’s something else you’ve got to say that’s “not for everyone.”

The internet is too big to please everyone. (And there are plenty of people out there who aren’t worth pleasing.) Find your own village and give them what they’re looking for. You’ll find that they happily come back for more.

Trying to figure out how social media and making a living can go together? Subscribe to our free newsletter on Internet Marketing. It starts with a 20-lesson tutorial on the four keys to building a sustainable business with content marketing.

Previous article: Here’s Something to Think (and Talk) About
Next article: What Purple Rain Can Teach You About Effective Online Marketing