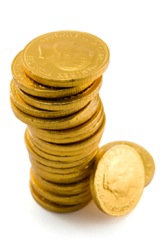 I was talking to a concerned client recently.

After taking my advice, his traffic and blog comments had started to decrease. We’d had three or four sessions, and he’d diligently done all I suggested, and he was implementing and enjoying himself and excited about his business.

But that graph kept trending downward. And it was starting to get to him.

Honestly, I could see where he was coming from. You hire a coach, and he tells you what to do, and your numbers go down?

But here’s the flip side:

During that same time that he was sweating readership and some zeros above his comments sections, he got his first big sale. Then his second big sale.

His number of customer inquiries went up, too — a growing pool of people who hadn’t hired him yet, but were on the right track to do so.

I told him to stop worrying about traffic. His goal wasn’t to attract as many eyeballs to his site as possible. What he really wanted was to find the action-takers and the customers — people who loved him and would prove it via their wallets.

No matter what your business, the goal isn’t to amass as much raw material as possible. (For a business centered around a blog, that “raw material” is typically traffic.)

The goal is to sift through that raw material, discard the junk, and find the small amount of true gold inside.

Small and engaged is better than big and vaguely interested

When the Third Tribe opened its doors earlier this year, Sonia and I talked in the very first seminar about the smallness of our lists. Sonia said that the big gurus would laugh at the size of her list, and I told Sonia that she’d laugh at mine.

Since that time, not much has changed. Relatively speaking, I still don’t have a large email list. I don’t have huge traffic to my blog.

But I don’t care in the least, because what I do have is a connection to a relatively small group of people who are pure gold.

They’re like me. They like me. I like them. I can talk to them like old friends. I can tell a borderline joke and nobody leaves, because we all have the same sense of humor.

I can make them an offer that I think is great and be pretty darn sure that they’ll think it’s great, too.

My people and I feel more like a club than a crowd. We’re not a huge group, but I’ll take close bonds with a few over a larger but more disconnected group of people who “read stuff from some guy online somewhere” any day. We’re small, but we’re a unit. Team Johnny, if you will.

That didn’t happen by accident. I had to sift and sort to find these people, and doing that is a lot harder than “increasing traffic.”

I don’t care about traffic if it’s unfiltered and nonspecific. Hell, I could increase traffic tomorrow if I wanted, but if it isn’t traffic that converts into sales, what’s the point?

A simple, 2-step plan for finding for your own gold

Regardless of whether your traffic increases or decreases — or whether your number of comments goes up or goes down — the question you should always be asking is, “Am I getting more gold in my pan, or am I just collecting meaningless rocks and dirt?”

Commenters are more interesting to me than raw traffic, but even commenters are the wrong people if they’re just hanging out.

So if you’re out to find the gold in them thar hills, here’s how to go about it:

You don’t just need to know where to go to find gold. You also have to know what specifically you’re looking for (i.e. gold is usually in small flakes, not giant nuggets — and correspondingly, your ideal people may not be who you think they are) and how to tell the real stuff from fool’s gold.

Your guide in the quest to find more of those best people is intimate knowledge of your ideal reader.

Writing content is the blogger’s way of hiking through the trails and kneeling in the rivers to look for that glint of gold. That sketch of your perfect person is your map, so stick to it and don’t wander around trying to write for everyone. Think narrow and precise.

If a prospector’s map showed a hundred-mile circle bearing the legend, “Gold is in here somewhere,” it’d be pretty useless as a treasure map.

2. Sift and discard the junk

People look at traffic and blog comments because they’re incredibly easy stats to see and to measure. But people also forget that they’re largely irrelevant.

You don’t care how many people comment; you care how many of them come back again and again, and use your comment section as a way to know, like, and trust you.

You don’t care how many people look at your products and services, or how many eyes see your offers.

Don’t turn down traffic that comes by chance, because more eyes means more potential customers. We all need traffic. But what you ultimately care about is how many people buy your stuff, not just the raw number of visitors.

Put all of that riverbed dirt through your sieve, and let go of everything that isn’t gold.

Don’t be afraid if people leave your site or unsubscribe from your email list, because those people aren’t the ones you’re looking for.

The question you want to ask is, is your connection to your ideal people increasing? Are you seeing more sales or more inquiries about possible sales? Those are the metrics that matter.

Do you know another reason for decreased traffic and decreased comments?

Those things also happen when your content sucks. So it doesn’t always mean you’re doing things right if your stats go down. Far from it, actually.

The lesson here isn’t to ignore or scorn traffic, but instead to pay more attention to the numbers that really matter.

If they’re doing more of that, you’re finding your gold, and traffic becomes a bonus.

About the Author: Johnny B. Truant is setting up WordPress blogs for free this week. Get yours before time runs out!

If you’re looking for a map to the gold in your online business, sign up for the free Copyblogger email newsletter, Internet Marketing for Smart People. It kicks off with a 20-part tutorial on how to boost the numbers that really matter in your business.

Previous article: Copyblogger Weekly Wrap: Week of December 6, 2010
Next article: How to Make People Give a Damn About Your Business