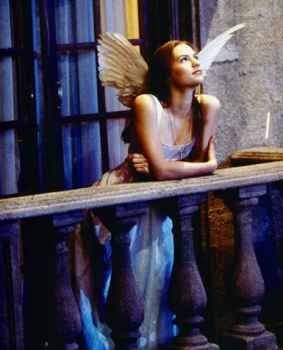 There’s been a lot of talk about “story” here at Copyblogger lately. Actually, they’ve been talking about story for about four years, but you might not have realized it.

As a content marketer, or even just a blogger who’s trying to figure out the basics, you’re writing a story.

Every day. With every word you put in front of your readers.

So far, Robert Bruce has given us a lesson in dramatic tension; Sonia, protagonists; and Brian, crafting remarkable marketing stories.

But there’s something that wasn’t touched on. Something, to me, that’s the most important aspect of any marketing story.

It’s the “what at stake” — both for the character in your story and the person reading it. It’s the thing that unifies the protagonist, the tension, and the story to make it worth sticking around for.

The story of two star-crossed lovers …

In high school you read the story of Romeo and Juliet. It was the play that introduced us to two households, both alike in dignity, and the star-crossed lovers fighting for their chance to be together.

Shakespeare let us know immediately what was at stake for the characters — forever love. The drama and the swords make it sexy, but what the reader wants to know is if love can defy death. If love is as powerful as the stories have always told us.

Because if Romeo and Juliet can attain forever love, then there’s hope for the rest of us. We’re hooked because we need to know. Our own love is at stake.

Of course, not every story is about love.

With the holiday season in full swing, we’re currently bombarded with stories of all kinds. We’ll see stories about family, joy, loneliness, hope, second chances. And marketers will attempt to tie the tension to why it matters to you, the audience. If they go after the wrong message, audiences will ignore it.

And if they get it right? Audiences will cling for dear life.

An organization that does this remarkably well is the ASPCA. They know how to craft stories that compel people to not only pay attention, but to act. They bring us to our knees showing us abandoned puppy faces set to the tune of heart-wrenching Sarah McLachlan melodies.

The result of this marketing story will be droves of people heading out to their local animal shelter to adopt a new family member. The commercials work because we immediately know what’s at stake: Adopt a puppy or the puppy dies. If the puppy dies, so does a piece of our humanity.

We choose the puppy.

What’s at stake for your customers?

As marketers we use stories as a way of relating a specific need to our customers.

We set ourselves (or our customers) as the protagonist, reveal the tension, and then set the product as what moves the mountain. It’s a good story, but it’s not going to hook anyone yet. Not until you can show what’s on the line.

If you’re telling your customers what your product does, you’re telling the wrong story. What you need to tell them is how it will help them achieve that inner need.

In Brian’s post, he spoke about how knowing your audience is what will cause you to win or lose the battle. He couldn’t be more right. You need to know the inner battle your prospects and customers are facing so that you can set your product or service up as the answer. The story has never been about the purchase itself, it’s about the benefit achieved via the purchase.

Whether you’re writing a novel, content for your Web site, or a blog post you want people to not just read it, but act on, you need to show them what they’re fighting for, and the benefits of winning.

Setting up what’s at stake

Sounds good. How do you do it?

Define it: Apple doesn’t sell a product; they sell a lifestyle others want to attain. (Usually one of self-righteousness.)

What are you selling? To truly know, you need to do what Brian said: get to know your audience. Effective writers move people by tying the theme of the story back to whatever crisis their customers are facing.

Show It Early: Show what’s at stake for your characters (and your readers) from the beginning. Give them the protagonist, what they’re fighting for, and then pan out to show the seemingly-unmovable mountain directly in their path.

If we cared about mountains, we’d actually be outside.

Mirror Character and Customer: Your audience and character don’t have to be entwined in the same battle for the story to work.

Just because I’m not a prostitute doesn’t mean I don’t understand what’s at stake when Richard Gere offers to put up Julia Roberts in the movie Pretty Woman and she’s forced to tell him no.

What’s at stake is self-empowerment. It’s universal and that’s why it works. If Richard Gere can climb that fire escape for her, someone can do it for us, but only if we empower ourselves first.

Tie it All Back: In order for a story to work, we have to see the theme moving from beginning to end. To appreciate the resolution, we need to understand the fight that it took to get there. The clearer you are about setting up what’s a stake in your story, the better your audience understands why characters are acting in a certain way and the more invested they become.

As a content writer, being able to relate the struggles being face by a protagonist to the struggles of your customers? Well, it’s pretty much the holy grail of marketing.

It’s the “Why the hell should I give a damn?” that all stories need. Without it, you haven’t hooked anyone.

It doesn’t matter if your story continues to move that character up their mountain if you’re not moving your audience in the process. You need to show people what’s on the other side and what it is they’re fighting for. It’s what’s at stake.

About the Author: Lisa Barone is a writer, content marketer and social media strategist. She’s most known for saving brands (most often from themselves) and for her voracious tweeting. You can follow her on Twitter at @lisabarone or find her blogging about her own struggles with voice at VoiceInterrupted.com.

Lisa Barone is a writer, content marketer and social media strategist. She's most known for saving brands (most often from themselves) and for her voracious tweeting. You can follow her on Twitter at @lisabarone or find her blogging about her own struggles with voice at VoiceInterrupted.com.

Previous article: How to Find the Gold in Your Business
Next article: Tim Ferriss on How to Reinvent Yourself with Blog Marketing