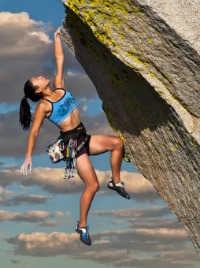 I don’t have a cool life-or-death story.

I didn’t almost die from a snowboarding accident.

I wasn’t diagnosed as a toddler with an illness that was supposed to kill me.

I was a working mom with a good job. The money was good, the benefits were great, and the people were smart and nice.

I had a cute little private office and the company was doing interesting work. I had created my own department, and everything we did was based on something I had built. (For a control freak like me, this is a very pleasant.)

And I was about ready to shoot myself from boredom.

A normal person would doubtless have been able to navigate this. There are a lot of things in the world that are worse than boredom.

But I am not a normal person

For me, being bored is like being slowly boiled alive. It seems tolerable at first, but every day it gets more and more painful.

The obvious answer would have been to change jobs, but I had a strong sense that working for someone new wasn’t going to cut it.

First because we were sailing into the worst recession in decades, and companies weren’t lining up to hire anyone. The few who were hiring seemed to like specialists with neat, sensible resumes, not Janes-of-All-Trades like I was.

(It turns out I was a classic Linchpin, but Seth hadn’t written that book yet so I didn’t have a word for it.)

The second, more important reason was that I knew it would be more of the same.

In the best-case scenario, I’d work lots of hours away from my family (my beautiful little boy was just two) to build something cool, get it to work, tweak it until I thought it was just right, and then … start to die inside again every time I pulled into the downtown garage and made my way to another office.

Maybe I could try for the executive suite? That would have brought interesting new challenges.

Sadly, I lack the right instincts to climb the ladder in a big company. I say things I shouldn’t say in meetings. I challenge the wrong people. I am incapable of hiding my impatience with game playing.

These were not qualities that helped me climb the ranks in the traditional corporate world.

People asked why I didn’t go out on my own

I had a very marketable set of skills. I wasn’t just a marketing writer … I was a damned good one. (Sorry if that sounds arrogant, but it’s not because the Writing Fairy blessed me at birth … it’s just because I’ve done a hell of a lot of writing.)

But oddly enough for someone who had spent so much time in marketing departments, I didn’t really know how I was going to go out and find copywriting clients.

(This isn’t unusual. Corporate marketing is a very different creature from marketing a small solo business. For one thing, in a big-budget marketing department, you can sometimes afford to do a lot of what doesn’t work.)

But I was reading Godin and Copyblogger and Dan Kennedy. I had some ideas of my own, riffs on what those guys were doing.

I’d seen a lot of what worked and didn’t work within a talented marketing department, working with some of the best ad agencies in the business. I wanted to talk about ways to translate some of those big-gun tactics to a business that didn’t have that kind of budget.

So I started a blog. (Actually, as Brian pointed out to me when we first met face to face, I was building a shrine to Godin. I’m cool with that.)

I thought Perry Marshall was doing brilliant things with email autoresponders, so I created one, and I put my own twist on it.

I initially built my blog on the Typepad domain, which wasn’t a great idea, because when Seth did link to me a few months after I started, the link was to someone else’s property. Never mind. Live and learn.

That link did send me a lot of new readers, and the autoresponder allowed me to capture their attention for later. So it worked out after all.

When Brian Clark launched a product called Teaching Sells, I bought it within the first 10 minutes the cart opened.

That course turned on some of the lights for me. It gave me a systematic framework, a wider view of marketing and business. It got me thinking about options beyond client work.

I did all the homework. I did lots of exercises multiple times. I networked in the forums.

I applied what I was learning. Sometimes a little clumsily, but that was ok. I was learning that imperfect efforts can still bear fruit.

And I was learning that every effort is imperfect, which is a tricky for a perfectionist.

Are you seeing any rocket science here?

And nothing I did was a spectacular burst of heroic effort. Instead, it was an accumulation of slow, steady, purposeful work.

I created the best content I could for my blog. When I finally worked up the nerve to ask Brian if he would run a post from me on Copyblogger, I began to write weekly here — showing up week after week with the very best work I knew how to create.

I wasn’t the most talented writer on Copyblogger. I wasn’t even the hardest working. But I think I was the most stubborn.

I started to get some clients

Through this little content web I had started to weave, people started to hear about me.

And they started to email me asking if I would write for them. For actual money.

Was I slammed with work within weeks of starting this journey? No. It took time, partly because I was still working hard to do a good job at my day job, and prioritizing time with my family.

There was no shock and awe. There was a lot of slow and steady.

And that’s how the clients came in … slow and steady. But it was enough.

That’s the day I left my day job.

The economy was getting worse by the minute. I knew there was a strong possibility I would have been laid off from my company. Waiting for that would have been the “smart” thing to do tactically.

But I didn’t want to be pushed. I wanted to jump.

Sometimes there’s been a lot of stress. My health insurance company pulled a fast one and cancelled my COBRA for awhile. Some of my ideas worked and some of them didn’t. Sometimes the cash flow was very bumpy.

I didn’t have it all figured out. Instead, I had a list of about 10 different things I could try, and the knowledge that I could come up with a list of 10 or 20 more if I had to.

And I worked my tail off implementing them.

I think I got to #6 or #7 on my list before I found the winning combination.

But I’ll tell you the truth. There hasn’t been even one hour when I wanted to un-do that trade. I’ve never wished I had stuck with the maybe-safe boredom, even in that enviable set of circumstances.

How about you? Ever traded boredom for stress? Thinking about doing it some time in the future?

Leave a comment and let me know how it was for you.

About the Author: Sonia Simone is Senior Editor of Coypblogger and CMO of Copyblogger Media. Get more from Sonia on twitter.

Previous article: Seth Godin on Blogging, Business Books, and Creating Content that Matters
Next article: What a Navy SEAL Can Teach You About Becoming a Fearless Writer