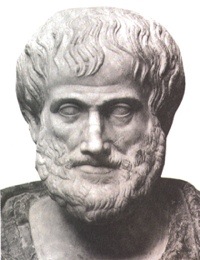 Imagine your shock after battling your way through the collective works of the ancient Greek philosopher Aristotle, only to discover you’ve heard a lot of it before. Then, it clicks.

“Hey,” you suddenly exclaim. “This Aristotle guy is ripping off all my favorite business gurus!”

But then, after checking the dates, you’re forced to sheepishly admit it’s the other way around.

People have been remixing the wisdom of Aristotle for more than 2,000 years, and we’re all the better for it. Taking timeless truths, communicating them in the language of the present day, and applying them to new ways of doing things will always be a winning approach that provides true value.

So, I’ll go ahead and take a crack at it.

My guess is that if Aristotle were alive today, he’d be blogging. And he’d also be in the Technorati Top 100 quicker than you can say Guy Kawasaki five times fast.

So, without further ado, here’s some old school blogging advice from way back in the day.

1. Begin With the End in Mind

Knowing where you’re trying to go before you start is crucial to leading an effective life (and handy for road trips too). Aristotle called this teleology, which is the study of matters with their end or purpose in mind. Fans of Stephen Covey will recognize the concept from The 7 Habits of Highly Effective People.

The same principle applies to any persuasive writing, and with a blog it’s applicable to both your big story as well as to individual posts. The overall story that a business blog is trying to tell is tied into your unique selling proposition, and you need to have a clearly-defined big picture perspective of how you’re going to tell that story over time.

You do that by telling smaller stories (otherwise known as blog posts), and, without unnecessarily taking the fun out of blogging, those smaller stories should each have a clear individual point and reason for being. Even if it’s just to make your readers smile on a Monday.

Each post in some way should be also telling a part of the bigger story that demonstrates to your readers that they will benefit from doing business with you. There’s a million different ways to do that, and developing your own unique style is as important as any other advice you might get.

Aristotle nailed the key to persuasion way back in Rhetoric, his detailed attempt to demonstrate that persuasion was a true art, contrary to the assertions of his mentor, Plato. Aristotle said that persuasion involved being able to identify the most compelling naturally-occurring element of any subject.

Once identified, Aristotle argued that the most compelling way to communicate that natural element is via pathos, the ability to connect with the emotions, desires, fears, and passions of the audience. And you certainly don’t accomplish that by focusing on yourself.

Quick summary: Identify a true and compelling benefit, connect with the reader on an emotional level, then back it all up with features and logic. You’ve heard that from me before.

You’ll likewise spot Aristotle’s wisdom in just about any book ever written on marketing and advertising. Your ability to communicate what’s in it for them in a meaningful way has never been more critical than it is now.

When it’s time to bang out a winning story post that captivates your audience and prompts them to take action, Aristotle’s got you covered. Here is his four step structure to persuasive writing:

Exordium – This is your opening. You’ve caught their interest with your headline, but the opening is where you’ve really got to grab hold for dear life. It might be a shocking statement, an interesting factoid, a famous quote, or a vivid anecdote.

Narratio – Next you’ve got to show the reader you understand their problems. They need to identify with you, and you with them. In this section you demonstrate that you feel their pain.

Confirmatio – The solution appears. Use vivid imagery to illustrate that the technique or service you offer is the answer, and give examples featuring people similar to the reader.

Peroratio – Don’t’ forget to expressly state the need to act upon the solution offered now. This is the call to action, and it’s crucial, yet so many people simply stop at the confirmatio. As Aristotle might say, you’ve got to close the deal.

OK, maybe Aristotle wouldn’t say that. But this is my remix. 🙂

The Right Story at the Right Time

The point I hope you take away from this post is that you’ll see certain timeless truths again and again in the world of marketing. How those truths eventually resonate with you depends on who tells you the right story at the right time.

So, it might be Seth Godin who gets through to you. Or maybe it’s Harry Beckwith. Or Joe Sugarman.

The same applies to you and your business. Someone in your field is going to connect with that motivated prospect and convert them into a customer or client.

If you’re telling compelling stories, and your competitors can’t be bothered to, who’s that someone more likely to be?

Previous article: How to Link Bait Me
Next article: Link Karma and the Sandbox of Gloom