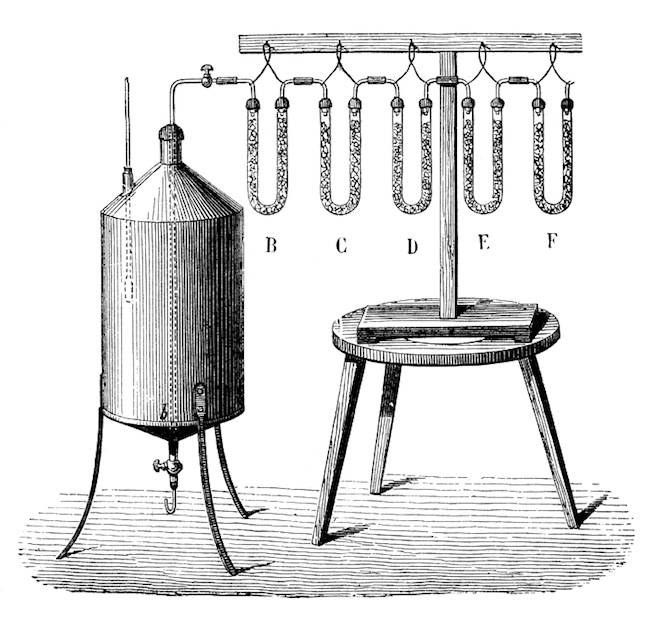 There’s no denying it: we love Google+.

Sure, we’ve made hay over other social networking sites like Twitter, Facebook, and Pinterest. That’s because it’s smart to be where your audience is … to engage them there, and then direct them back to your own digital property.

But Google+ is something different.

It’s why we’ve gone out of our way to teach you how content creators can build authority and an audience on Google+ … the critical role Google+ plays in authorship and online visibility … and why it’s the best social site for content marketers.

Now let’s get down to the quick and dirty and teach you how to create Google+ posts that get attention, shared, and comments.

Lots of attention, shares, and comments. But first …

My Google+ hall of fame posts

Since November 2012 I’ve put in a strong effort to get my personal Google+ account off the ground. And in that time I’ve put a few notches in my belt.

Now, there are some people on Google+ who have way more followers and get way more shares … but after months of toying with G+ posts (including on our Copyblogger Google+ page), I’ve reached a level of success relative to the 3,000 plus followers I have.

Not bad for a white, skinny kid from Illinois. So, please trust me when I say I know what I’m doing.

All right, on with four bits advice for writing Google+ posts that get shared …

You might wonder why I started with the image and not the headline. Here’s the deal: Google+ is a lot like a blog, but it’s also a lot like Pinterest where the image rules.

In fact during the last major update with Google+ Google made changes that support large, gorgeous images … going as far as allowing some images to stretch across the entire screen.

Here’s a photo that’s almost as wide as the three columns: 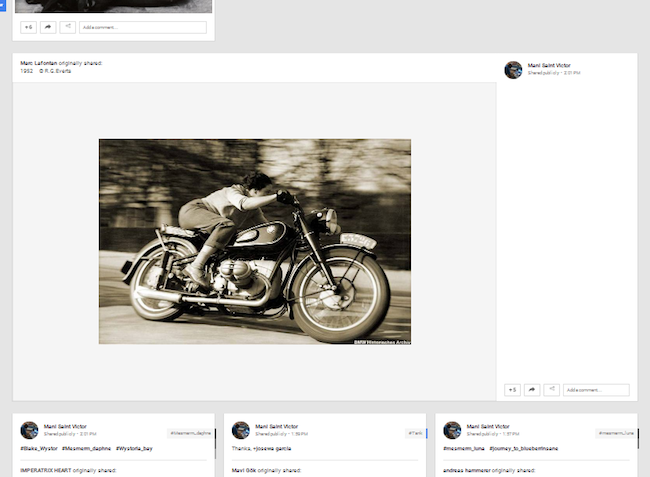 And here’s an image (screen grab … you can use a tool like Jing to capture images online) that’s just as wide: 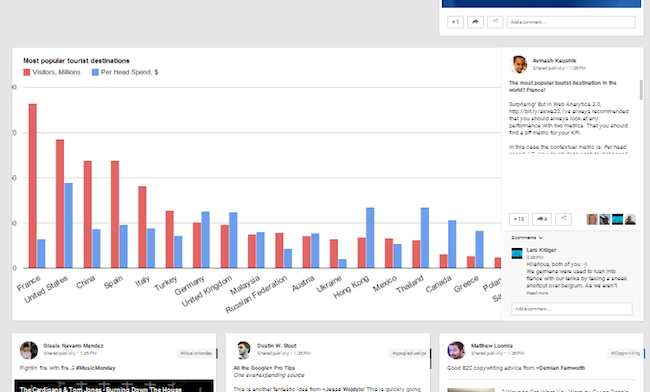 Talk about getting attention.

Now, this doesn’t mean you have to find the image first. You just have to realize how important it is. I’ve done enough informal, personal tests to conclude that an image can make or break your post.

Fortunately, choosing a good image for non-designers boils down to this: know where to look. Here are some of my favorite places to find interesting images:

Of course you can follow some popular photographers on Google+ like Beau Kahler, Thomas Hawk, or Micaël Reynaud. You can also check out a list of suggested photographers or suggested graphic designers to follow.

Keep in mind when using photographs or images: always ask permission and give credit. In some cases, like on Flickr, you can find images by artists who’ve chosen to share by Creative Commons rather than a conventional copyright.

After the image your next task is to write an attention getting headline. Follow all the headline writing rules we’ve taught you … like the four Us:

Note: keep your headline under 60 characters, otherwise it bumps into the second line like these two examples (I’ll explain why this is important in the next section): 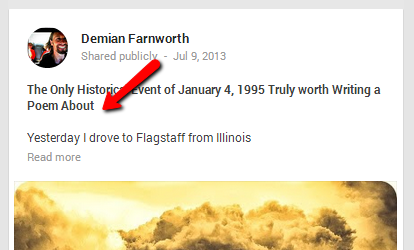 However, let’s say you simply have to write a two-line headline. If that’s the case, then your first sentence must be killer. 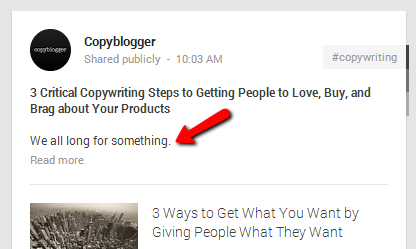 In the last update, Google changed the layout of posts so that you only see three lines of the original post before you see “Read more” link. In other words, your first sentence has to be a gripping teaser to get people to click “Read More.” 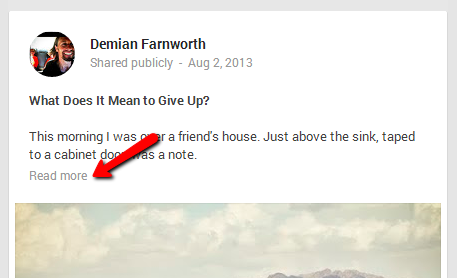 Stephen King is said to agonize weeks, sometimes months over the opening. You don’t have to do that, but it demonstrates the importance of the opening.

And it helps to get straight to the point: 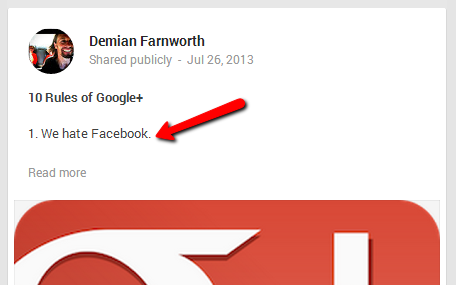 Just like in copywriting, your first sentence is one of the most important elements of your Google+ post.

Buckle down and write.

And the guidelines that apply to writing blog posts that Google loves applies to how you write your Google+ posts. 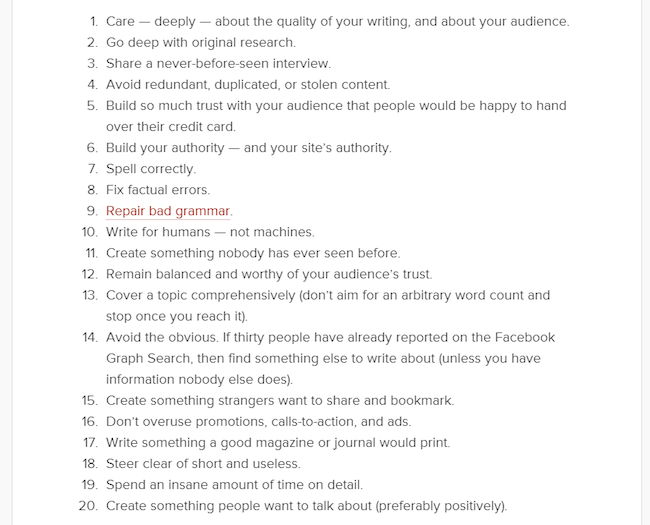 Google+ doesn’t give you much in the way of formatting, but you can format your posts with these four tips:

And keep in mind: you can always edit your posts once you publish. 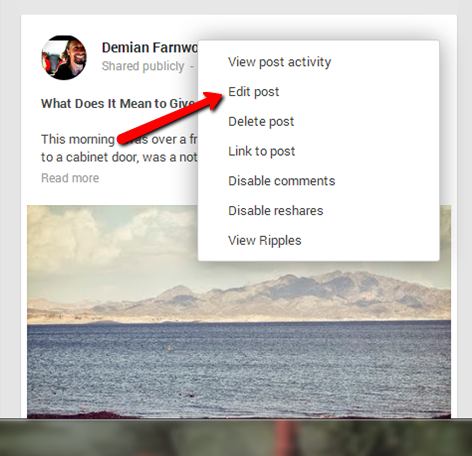 Furthermore, this isn’t Twitter. Slow down on the hashtags. Besides, Google can actually predict hashtags for your Google+ posts based upon the content. 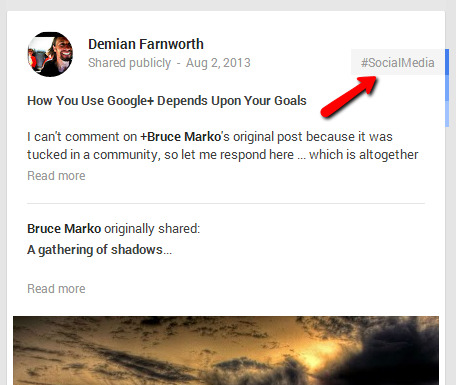 Knowing your audience is critical to high interaction and conversion. One of the beauties and distinct differences from other social networks are Google+ Circles. By default most people simply share their posts to “Your Circles” and “Public.” 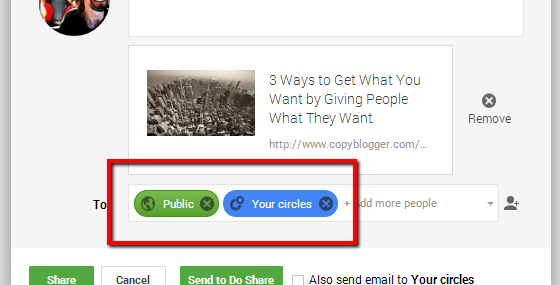 However, Google allows you to segment your audience with specific Circles.
For instance, I have Circles for Copyblogger, AgentPress, and Clevers. The subjects I share with each Circle is specific to that audience.

Circles allow you to build audiences around a common interest instead of blasting your entire stream with your passive-aggressive religious, sports, or political rants. Instead, segment your all-together-very-righteous rants for Circles dedicated to religion, sports, or politics.

Your followers will love you. Maybe.

So that’s the nuts and bolts of publishing great content on Google+. But you are probably wondering what kind of content you should share … so let me conclude with some thoughts:

The one thing you shouldn’t do is treat your Google+ account like a stand-alone blog where you bail on your personal domain. That’s a huge no-no, for reasons I talked about in this post.

I hope you’ll follow us on our Copyblogger Google+ page, and have fun posting!

Previous article: 7 Ways to Manage Comments on Your Site (Without Losing Your Mind)
Next article: Why You Need to Become an “Independent Publisher”