To say Stephen King is prolific is a gross understatement. Since he published his first novel (Carrie) back in 1973, he’s written over 70 more.

Early in King’s career, he wanted to write and publish constantly — which was against the prevailing wisdom of the time — and eventually convinced Signet to let him release a few books under the pen name “Richard Bachmann.”

King also wanted to answer the question of whether success was related to luck or talent. He went as far as purposefully suppressing the marketing of his Bachmann books.

His little experiment ended prematurely when someone outed Bachmann as King … but the results were clear. The Bachmann book Thinner sold 28,000 copies during its initial run. When it was identified as a book by King, it sold ten times as many.

When it comes to creating great content … it really does matter who you are.

And this is equally true online.

Authorship markup might prove to one of the most confusing conversations in our Author Rank series.

For one, many people think authorship is the same thing as Author Rank. Repeat after me:

Authorship markup is not the same thing as Author Rank.

Authorship markup is the method to display authorship information in search results for the content you create. For example, this shows up on page one of the SERPs for the phrase “content marketing”:

Authorship is how Google knows that an individual human being named Brian Clark published that article.

Author Rank, on the other hand, is an aspect of the search algorithm that Google appears to be implementing. There isn’t enough data yet to identify precisely how it works, but advances like authorship markup, Google+, Search Plus Your World, Agent Rank, and so on certainly look like they’ll play an increasingly major role.

Authorship markup is also confusing because it’s difficult to implement (or used to be).

But I’m getting ahead of myself …

Authorship helps you stand out in search

Authorship markup made a big splash toward the end of 2011 — about two months after Google+ launched.

Many people praised the move because of the impact it had on search results.

While by itself it wouldn’t help you rank higher (you still have to create great content), it would help you stand out.

Here’s an example. Do a search for “intellectual snobbery” and this probably what you’ll see: 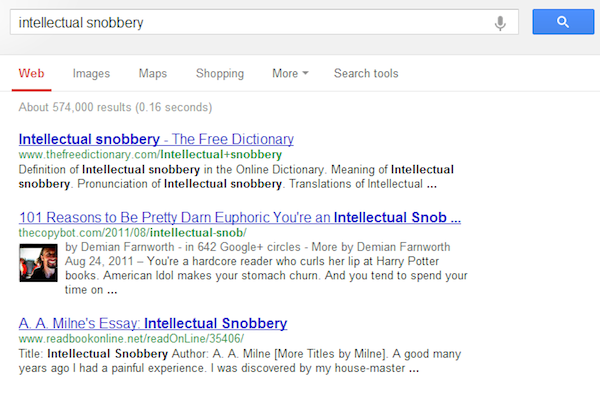 Any doubt on which link you will click on?

The headline alone is pretty tantalizing, but my mug shot beside the results … it makes that listing stand out from the rest. (And yes, I’m quite pleased with those results. Does that surprise you?)

And, as you might have guessed, implementing authorship markup typically increases click through rates to your site.

With that in mind, let’s take a look at the top ten reasons you should claim your Google Authorship markup …

Shortly after its implementation, sites ran tests to see how much it increased markup. In some cases the increase in click through was as high as 150%.

This is exactly what happened to Catalyst.

Cyrus Shepherd further increased free traffic with authorship markup by doing nothing more than plugging in a better headshot.

With authorship markup implemented, you also get this sweet byline in your search rankings:

Here’s what those links do:

Those links are potential clickthroughs, too.

Look back at that image for the search phrase “intellectual snobbery.” I might as well have the number one spot because my listing stands out from the others.

That visibility is a huge advantage.

In fact, eye tracking studies are showing us that the eye is first drawn to the image, then to the headline (which is why writing seductive headlines is so important).

Furthermore, studies have shown that by placing a photo so that you’re looking to the right (toward your listing) encourages people to actually look at your listing.

(If you want more hints and tips on creating an image that stands out, take a look at the Google Authorship and Author Rank community’s Authorship 101: Basics page.)

Let’s look at another interesting perk of authorship markup.

Imagine someone clicks your listing, wanders down your page for about two minutes, and then, satisfied, hits the back button.

The search results page they land on will be slightly different. See if you can spot what’s new: 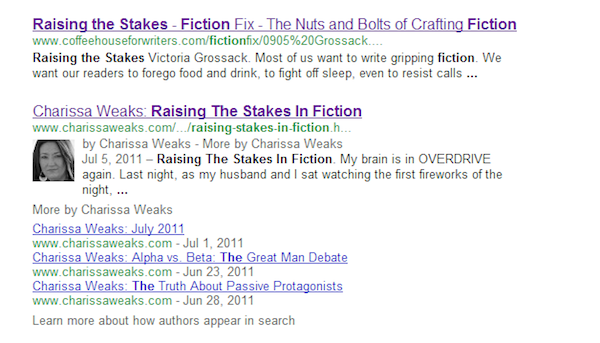 It’s the additional links beneath Charissa’s listing. Those weren’t there before, and they actually equal more opportunities to get people to look at your content.

Google is probably thinking this: if someone clicks through to your page, but bounces out immediately, then your content is weak, and the user is not interested in seeing more.

If they stayed on your page for at least two minutes, however, that demonstrates to Google that your page has value, and perhaps other pages will provide additional information useful to the user.

In other words, SEO and user experience are blood brothers.

This is yet another signal in the Google machine that suggests useful, unique, and authoritative content is valued and rewarded … but it also reinforces another idea very important to us: the writer runs this show.

Authorship markup and Google+ are two sides of the same coin.

Google+ is the identity platform (which is why your Google+ ID is a long string of numbers, not unlike your Social Security or driver’s license number) … and now authorship markup is the digital signature.

Exactly what they need to pull off something like Author Rank.

In essence, Google is saying … we want to make sure that you are a real human being … we want to stamp out anonymity and spam … we want to regard you as someone who is willing to put your name on the line for the content you create and share.

So … are you willing to put your name on the line?

Together, authorship markup and Google+ work hand in hand to deliver some pretty slick benefits to the writer … to signal that the writer truly does run the show.

I’ve already mentioned the big three above. But for those who need further proof that authorship is worth claiming, here are seven more:

What you need to do next …

I need you to do three things. First, claim your content with authorship markup.

You can head over to Google authorship markup support and follow the directions (you have two options).

Or, if you have a WordPress site and are using the Genesis framework, then you can claim your content in three easy steps.

Next, I need you to join us on Google+. We’ve got a growing, lively community where we share smart online marketing content and groovy 80s music videos.

Finally, wait patiently for the last article in this series — The Content Marketer’s Author Rank Cheat Sheet — where I bring all of this home.

This is the fifth in my series exploring the power and future of Author Rank. You can grab the others right here …

… and make sure you subscribe to Copyblogger so the next one lands right in your inbox or RSS reader.