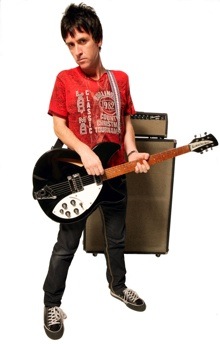 Last week, Brian threatened to replace me as the writer of the Copyblogger Weekly Wrap-Up. All because I left for vacation without writing up the second post from last Friday, and chose instead to lay on the beach ogling bikini girls.

The ensuing confrontation on Monday was quite heated.

“Yeah, I ditched … what are you going to do about it?”

“I MADE you and I can BREAK you,” Brian responded, frothing angrily.

“It’s JOHNNY’S wrap-up,” I yelled back. “That name has mindshare, baby. You can’t fire me now because then there will be no JOHNNY. Check and mate!”

Unfortunately, he outfoxed me and I will retire after writing this intro. I hope you enjoy the remainder of this Wrap-Up, which has been written by the former guitarist for The Smiths, Johnny Marr.

Here’s what happened this week on Copyblogger:

How to Dominate Your Niche Without Apology

This rollicking post was written by one Nathan Hangen, who explains why apology is bollocks when you’re trying to do your internet bloggery thing. Why stop in advance of trying to make a point to tell your readers, “Right-o, this is just my own opinion, and I’m not trying to convince you that it’s totally on the mark – you can just take it as being my own thoughts on the matter.”

That’s rubbish, and much too British for most of you. If you want to dominate your niche, you say what you have to say as if it’s fact, and you don’t pussy-foot about it.

Consider that Morrissey wanted us to play “Lifeguard Sleeping, Girl Drowning” and that several of us said, “Steven, honestly … what’s with you saying, ‘Hooray’ repeatedly while the girl is going under?” Do you think he knuckled under and said, “It’s my opinion that this lifeguard is lazy and might do such a thing?”

No. He said, “Shut up and play, Johnny … I have a hair appointment.”

I have to say that I didn’t initially agree with the title of this post. Smiths money has me richer than the queen, and I played in Modest Mouse and they paid okay too, and I don’t hate my life nearly as much as I hated playing “Vicar in a Tutu,” which, when you think about it, very few rich people are required to do.

Yet, some bird named Sonia wrote a whole report on the topic, and I see where she’s going with it. There are successful people like me who love their lives, and people like Morrissey who seem miserable with everything including success. So what makes the difference? You should read her report to find out.

(Honestly, Morrissey was a downer even in the best of times, and I’m pretty sure his lawn cuts itself because it’s so emo. So I’d wager that one of the 8 reasons rich people hate their lives is “because they’re Morrissey” — that depressive wank.)

I can’t wait to get my proper new website and use Scribe on it. Then when people use Google to find out “who wrote the greatest Smiths song ever,” they’ll know it was me, not that miserable fop Morrissey.

In fact, let me ring up my web designer this instant.

“Hullo? See here chap, is my website live yet?”

“You’ve said that before … that joke isn’t funny anymore. I bloody well need an answer!”

“Look here – when you say it’s gonna happen now, well when exactly do you mean?”

This post by David Brim explains how to treat your customers as if they were fish, even if they aren’t fish.

If you want them to bite on your offers, you have to “bait the hook properly.” If you want better odds of landing customers, you should “go where the fish are.” If you want to get more business out of existing clients, you “roll them in beer batter and deep fry them.” And if you’re working an upsell, you “serve them with chips and a pint.”

So if you want to land more customers, read this post. You could even do it while eating those fish and chips. Just don’t go crazy with the vinegar on the chips, because then you’ll stink and your customers will just say, “Bugger off; You Reek-A!!”

How to Build a Successful Business with a Small Audience

It’s a shame that Truant got sacked because I understand he has some sort of fixation with gnomes, and this post about “small audiences” was cheekily topped with a photo of lawn gnomes. (Lawn gnomes are diminutive, hence a brilliant play on the synonym “small.” Get it? Jolly good fun!)

The post itself by Jonathan Mead (who I understand is not diminutive) is about creating a profitable business without having scads of subscribers and readers. Essentially (and Jonathan explains how this is done) you do this by making that small audience very loyal.

Which makes sense, really, because though The Smiths weren’t as massively successful as say, the Rolling Stones, our fans would hop into wood chippers on our command. Even the ones who weren’t suicidal already, and I’d guess that was at least 25 percent of them.

About the Author: Johnny Marr is the critically-acclaimed former guitarist for The Smiths, most recently a member of Modest Mouse, and the composer of How Soon is Now?, the greatest Smiths song ever written.