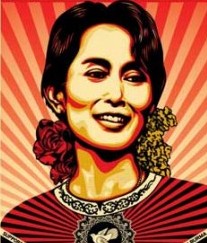 If you have a blog, you tell stories.

You may have dealt with the frustration of not having very many people see your stories, of not having enough subscribers or readers.

Nevertheless, you keep on documenting your story in your blog posts, your Facebook status updates, your Twitter feed.

You tell your stories and hope people will hear you.

The majority of people in Burma — a country that is brutally ruled by a military dictatorship — have no electricity, let alone access to the Internet. Which means it’s difficult to widely share stories about what they experience there.

Right now, there are thousands of blogs detailing the difficulties of life as a single parent, but there aren’t many blogs describing what it’s like to live your entire life in a refugee camp or to survive a disaster like Cyclone Nargis, which killed more than 138,000 people in Burma.

Those who manage to blog can suffer dire consequences for daring to do so. A 30-year-old blogger from Burma was sentenced to 20 years in prison for posting political satire.

The stories we tell are undeniably powerful. Stories allow us to connect with one another, to know each other as individuals rather than statistics.

Yet those who are living through human rights crises have their stories written from a distance, in news blurbs and legal briefs. These stories rarely become as compelling as the ones you tell on your own blog, simply because they often lack the intimacy of a much fuller first-person narrative.

Putting the human back into human rights

But porters can die at any time. For example, if a soldier got angry and just shot me with his gun, nothing would happen to him. I would just die, like a chicken or a rat. To Tanintharyi Division, they send 500 porters every year. Of the 500, only 72 porters make it back to the prison. If you survive, you survive.

I was a porter for nearly six months.

Perhaps you’ve read about the severe crackdown on monks protesting in the Saffron Revolution, or the destruction wrought by Cyclone Nargis. Although Burma is a hotbed of human rights abuses and repression, it is also home to 50 million individuals and exponentially more stories.

This fall, Voice of Witness will release Nowhere to Be Home: Narratives from Survivors of Burma’s Military Regime. The book will delve into the diverse lives of people who have lived under Burma’s military junta, the State Peace and Development Council (SPDC).

Voice of Witness is a nonprofit book series that empowers the men and women who have lived through human rights crises by letting them tell their stories in their own words.

In Nowhere to Be Home, dozens of stories are told publically for the first time.

You can read the short descriptions we’ve put here for you, but as you can see, they only scratch the surface as an introduction to the narrators.

(All of those names, as you can imagine, have been changed to protect these people.)

The book brings to light the voices of refugees, former political prisoners, migrant workers, farmers, artists, students, and activists. These vivid portraits do something that human rights reports don’t: they allow you to experience Burma through entire life stories of its people in their own words.

Bloggers are storytellers, and your stories give you power.

We’re asking you to share some of what you’ve learned from your own experiences of telling your story publically, to help us imagine ways this book can extend beyond the reach of print.

Tell us. How can we use the Internet to amplify the narratives in this book?

How can we make their words echo as far and as wide as any post here on Copyblogger?

We want to hear your thoughts about sharing stories, about how storytelling can change the world, and about how you would use social media to share these incredible stories collected from Burma. Please let us know in the comments!

If you’re inspired by the storytelling work done by the nonprofit book series Voice of Witness, you can make a donation here to support their work.

Maggie Lemere and Zoe West are the editors of Nowhere to Be Home: Narratives from Survivors of Burma's Military Regime, the latest in the Voice of Witness book series. Voice of Witness was founded by author Dave Eggers and physician/human rights scholar Lola Vollen, and is the nonprofit division of McSweeney's Books.

Previous article: Johnny’s Copyblogger Wrap-Up: Week of May 31, 2010
Next article: How to Rescue Your Readers from Purchase Paralysis