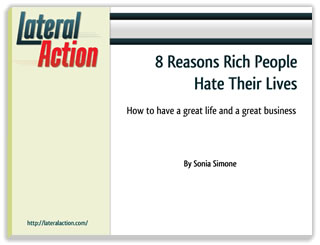 A young woman discovers in college that she is driven by a burning desire to succeed. She starts a business, struggles, goes through some lean years.

Eventually her hard work begins to pay off. She has a good year. Then, a great year. The year after that blows the doors off.

She gets everything she’s worked so hard for. The prestigious client list. The Armani wardrobe. The BMW. The gorgeous house in the most expensive part of town. The money pours in, almost effortlessly. More money than she ever dreamed she could have.

How do you fill in the end of this story?

Most of us end this one with:

But the more she succeeded, the less fulfilled she became. She shortchanged all of her personal relationships. The harder she worked, the less happy she became. Finally, she realized that her success was hollow. But by now she was addicted to the high income, and it was too late to turn back.

But what if we could write a better ending?

Early on, she refused to become a captive of her business. Even in the tough times, she took six weeks of vacation a year, knowing that when she made time for herself, she became an ever-sharper businessperson.

As the business became more successful, she traveled the world with her family and friends. She was profoundly grateful never to have had a “normal” job, which would have made it hard to spend serious time with her family.

The harder she worked, the happier she became. She launched a foundation to help kids from poor backgrounds create businesses of their own. She became a serious painter. She went back to school and earned a master’s in philosophy.

Everything she did to nurture her life seemed to strengthen her business. She was terribly grateful to have caught that initial spark early, and to have acted on it.

It feeds our stereotypes. It reinforces our fear of success. It reassures us that we were right never to act on those dreams we had.

The second story is a lot more enjoyable to live.

Both stories are realistic.

If you choose to create a business, large or small, you get to write the story. You decide where you’ll put your focus, what you’ll spend your time and attention on.

I’d love to help you write a better story

These two stories fascinate me. I’ve known both of these women. I’ve watched them work, watched what they struggle with and what seems to come easily to them.

This obsession, like most of my obsessions, ended up as an extended piece of writing, which I’d like to share with you. It’s called The 8 Reasons Rich People Hate Their Lives (PDF).

The report explores some questions that fascinate me:

The report could just as easily be called The 8 Reasons (Some) Rich People Love Their Lives. Because that’s the part that really interests me.

How to play the whole game to win — not just the financial part, but the living part as well.

If this is a topic that interests you, I hope you’ll check out the report. It’s totally free, you don’t even have to leave your email address. And if you find the report valuable, please share it with people you care about.

Rather than writing your business story as a sappy melodrama, let’s write something for you that’s a lot more satisfying, a lot more appealing, and a lot more fun.

About the Author: Sonia Simone is Senior Editor of Copyblogger and co-founder of Inside the Third Tribe.

Previous article: How to Dominate Your Niche Without Apology
Next article: Scribe: New Versions & Better Features