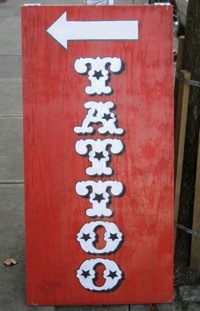 I got this phone call yesterday from Brian, because he’d just read the post on my blog about how I’m thinking of getting a couple of tattoos. Anyway, he insisted that I drive down to Texas immediately so I could use his guy for my new skin art.

I had to listen because the man definitely knows his ink. Most people don’t know that Brian has an entire episode of Diff’rent Strokes storyboarded across his back. The dude is hardcore.

When I got there, he funneled me enough tequila to send an entire Cinco de Mayo party to Federal prison. Then he took me to some place called Deep Ellum, where I got two tattoos, an infectious disease, and a black market kidney.

All I can show you are the tattoos. SOLID.

Anyway, here’s what happened this week on Copyblogger:

I was just talking to a client about the topic of this post. How do you write for search engines in a way that sounds natural rather than super-annoying, what with all the SEO stuff you have to jam in there, like proper keyword utilization and backlinking and robots and cyborgs?

And conversely, how do you rank well in search engines while writing in a way that sounds natural, unlike that romance novel written by my cyborg buddy Norm?

You read this post and pick up your copy of Professor Clark’s free report, that’s how.

Out of everything I’ve said on Twitter, I have a favorite tweet. It went, “They say true beauty is on the inside. The problem is that nobody can see it in there, so you’re still going to look ugly.”

It kills me that I can’t repeat that, but in social media, you really can’t keep recycling the same exact stuff. The same problem exists for blog posts, which is where this post by Derek Halpern comes in. You write a great post, and then the next thing you write bumps it down the page. A few weeks later it’s gone, and you can’t pull it back up to the top or people say, “You tweeted that already, Truant, you hack.”

To put that “best of” stuff to good use, Derek tells you how to use of your A+ material to keep drawing readers… while boosting your search engine rankings at the same time.

6 Steps That Get Big Shots to Answer Your Email

I’ve finally figured out why my emails to Jessica Biel are going unanswered. I figured it was my pushiness and abjectly creepy come-ons that had resulted in the silence and/or restraining orders, but it’s because I’ve been crafting my messages incorrectly.

This post by Pace Smith explains how to get the attention of the big names you’re trying to get ahold of. Because honestly… they may LOVE what you have to say or the pitch you have in mind, if they could just cut through the email you’ve buried that gem of an idea in.

Important note: This post also contains a cookie volcano. It was the only post with one that I came across this week, so feel free to thank me in the comments.

10 New Ideas for Getting Inspired to Write

The guy who wrote Thursday’s post was once mentored by a goth who carried a Samurai sword on his belt and used it to trim his hedges. If that alone doesn’t frighten you into reading this post, then there’s no hope for you.

The post itself (which contains no swords but does feature a dog wearing a funny hat) lists ten more of Jon Morrow’s gems for getting inspired to write. Because sometimes, the muse doesn’t want to come out, and you have to chase her with a Samurai sword until she relents. The tips in this post will whip any muse into shape pronto.

P.S: I’m not kidding about the sword guy. Jon tells the story in Question the Rules.

The Solution for Marketing Overwhelm

If there’s one person I’d trust to draw up a marketing blueprint, it’s Sonia Simone. You just know she’s able to walk that fine line where she’s giving easy-to-follow steps to creating your plan and staying unstuck in your biz without getting all, “You must do this no matter what” on you.

But whatever you do, don’t let Sonia draw up blueprints for your house. How is a building supposed to stay upright using six boards and no bricks? And why are there chickens in the ventilation system? WHY, SONIA? WHY?

But marketing blueprints? Yeah, she’s great at that. And the Remarkable Marketing Blueprint is about to open up again, so you should really get on the advance list so that you’ll be first to know when it does.

In Sonia’s second post of the day (damn, she’s fast), she points out the truism that to succeed in anything, you need any two of the following: Talent, luck, and persistence.

So you can be talented and persistent. Or lucky and talented. You can even be relatively talentless as long as you’re persistent and lucky, which is the process through which most sitcoms are created. But you need two, and this post is filled with pointers on how to become more talented, more persistent, and even more lucky (hint: set leprechaun traps.)

I bet if you have all three of those attributes, you end up being like Spiderman. Bitten by a radioactive spider? Lucky. Willing to fight a never ending cavalcade of cartoonish supervillians? Persistent. Able to take photos good enough for J. Jonah Jameson? Talented.

So there you have it . . . read this post and you’ll become Spiderman.

About the Author: Johnny B. Truant has a dumb blog at JohnnyBTruant.com and is one of the guys behind Question the Rules. You should also really check out his Jam Sessions with Charlie Gilkey, because they’re filled with tasty informational nuggets that make your business better.

Previous article: The Three Surprisingly Simple Keys to Success
Next article: How to Write an Article That Draws Thousands of New Readers