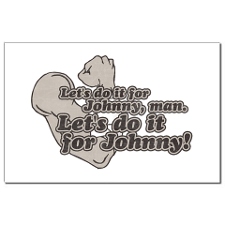 The following is a transcript of the Copyblogger editorial meeting in Austin, Texas, on June 8, 2010.

BRIAN CLARK: I’ve had it up to here with Johnny Marr. Having him write the Weekly Wrapup was a big mistake. Always with the scones; constantly with the scones. He ordered five dozen of them to eat with his tea and then still ate my danish. Then he started throwing the stale scones out the window, to knock pigeons off the ledge.

SONIA SIMONE: I’m tired of the Smiths references. Jon told a joke the other day and Marr said, “That joke isn’t funny anymore. It’s too close to home and it’s too near the bone.” Then he read one of my posts and commented, “Bigmouth strikes again.” Let’s face it: Time for a new Johnny.

JON MORROW: We could get Johnny Thunders. Or Johnny Cash. Or Johnny Bravo.

JM: Johnny Carson. Johnny Rotten. Johnny Knoxville. Johnny Depp. The Johnny from that weird book about a study about a film about a house.

BC: [Sigh] I’ll just call Truant. Maybe I can keep him in line with those photos I have of him. You know the ones I mean – with the walruses.

SS: Okay, next item on the agenda: Adding a “chicken farming” module to Teaching Sells. All in favor?

So, to hail the triumphant return of Johnny B. Truant … here’s what happened this week on Copyblogger:

Are You Too Lazy to Write Less?

Chris Garrett wrote this short post about the value of brevity in promotional or sales copy. How long should something be? Long enough to get your point across… and that’s it.

P.S: In person, Chris kind of sounds like Ringo Starr, so this post is even more fun if you hear it in Ringo’s voice.

How to Use Stories to Change the World

I could possibly go the Ralphie May route and say something stupid and then say how I understand, that a lot of people died in that joke. But instead I’ll say that I’m pretty happy to be able to make my stupid jokes freely and to not worry too terribly much about being shot for no reason.

Then I’ll say that you should read this post, and that if you have any more thoughts about spreading the stories of the voiceless, you should really hop in on the comments and share them.

How to Rescue Your Readers from Purchase Paralysis

There must be some seriously scared people around here recently. I mean, I got fired for missing the second of a 2-part fear post, and now this one by James Chartrand about frightening your customers. Or I guess helping them out of their fear — although I prefer to jump out at them wearing goblin masks and wielding a a bloody machete, which is basically the same concept.

Whether you’re a firefighter trying to get someone out of a burning building or a marketer trying to get someone over their hesitation to buy, the concepts are the same. You have to acknowledge their fear and help them to move anyway. Then you have to dangle several stories above a raging inferno from the arm of Kurt Russell while he says, “You go, we go!” in a heroic fashion*.

You want your customers to move out of paralysis and buy? Then set a building on fire. You heard it here first.

In this post, Sonia Simone cleverly tries to act as if she doesn’t spend hours each day doing connect-the-dot pictures by talking about it in the past sense. But the thing she says about connecting the dots in order to create a REAL pony? Yeah, she’s literally hoping that’s going to happen. She’ll deny it, but it’s true.

In an online marketing context, connecting the dots is all about taking free stuff and putting it together to form a cogent marketing or business strategy without spending any (or much) money. You can get a great education from free stuff tossed out by smart content marketers, but you’ve gotta know how to go from one to the other as if you were turning dots into a picture of SpongeBob Squarepants, so read on.

(Incidentally, this post made me think of Pee-Wee Herman singing “Connect the dots, la-la-la-la-la,” and now it’s stuck in your head, too. You’re welcome.)

What All Content Creators Need to Learn From Roger Ebert

Just to show how totally out of the loop I am, I had no idea that Roger Ebert had a bout with cancer until I read this post by Mark Dykeman. And when I read the line about how he can’t talk, eat, or drink, I thought, “Wow, that would really suck.” But then you get an analysis like this one and you kind of walk away getting the impression that while it almost certainly DOES suck sometimes, losing a lot of his jaw doesn’t really keep a dude like Ebert down.

Which leads to the lessons for the rest of us. You know, most of us being able to talk, eat, and drink, but still not pulling off what Ebert does, or even giving it nearly the effort that he has.

If you’re creative in any way (or trying to be) or if you develop any kind of content (or are trying to do so), you should really read this to see what you can learn from a survivor.

About the Author: Johnny B. Truant has a dumb blog at JohnnyBTruant.com and is one of the guys behind Question the Rules. You should also really check out his Jam Sessions with Charlie Gilkey, because they’re filled with tasty informational nuggets that will make your business better.

Previous article: What All Content Creators Need to Learn From Roger Ebert
Next article: It’s the Simplicity, Stupid