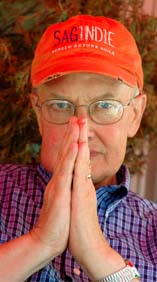 Roger Ebert’s name is synonymous with movie reviews. Many of us remember him bantering with Gene Siskel on the TV shows Sneak Previews and At the Movies. But he doesn’t banter much anymore. He lost his ability to speak due to complications of thyroid cancer in 2006.

Ebert may have lost the lower part of his jaw, but he hasn’t lost his voice. He continues to receive new acclaim and appreciation for the quality and feeling of his writing in books, newspaper reviews, and criticism.

It shows a deep sense of character. But it also shows a few other valuable traits we as content creators would be wise to develop in ourselves.

Keep a sense of humor

I’m sure Ebert must have some bad days. He can’t speak, eat, or drink.

But it never affects the quality of his writing. His words continue to sparkle and shine with life.

He receives continual praise for the power of his insights and the humor sprinkled within his work. Ebert’s recent criticism of Glenn Beck show that his wit and sensibility are still strong. He doesn’t go for the laugh-out-loud moment, but he uses sharp observation and quiet humor to pull the reader in, as he does in The London Perambulator.

Lesson: There is little in life that’s more valuable (to you and to your readers) than a sense of humor.

Focus on what you can do well

Ebert was a Pulitzer Prize-winning writer before becoming a famous film critic. Some people think his writing is even better since he lost the ability to speak. His ability to analyze and reflect on movies (or virtually any topic) is strong. He writes in a way that reaches both the average person and his peers.

Ebert is rarely in front of cameras any more (his recent appearance on Oprah is a memorable exception), but he remains a prolific writer. He uses notepad and pen to communicate in person and the keyboard for larger audiences, and he communicates constantly.

Profiled recently in Esquire magazine, Ebert offered up a journal entry to explain the power of writing:

When I am writing my problems become invisible and I am the same person I always was. All is well. I am as I should be.

Lesson: Be thankful for what you can do well. Do it as long and as vigorously as you can.

Ebert has plenty to complain about. For that matter, so would a couple of other smart guys like, say, Jon Morrow or Stephen Hawking.

None of them is wasting his time whining, though. They’ve had their fair share of happiness and fulfillment. They all enjoy what they do and they are damned good at it. They don’t look for pity. They are sincere when they say that they are doing what they love to do.

The Esquire article features a small picture of a Post It note written by Ebert:

There is no need to pity me. Look how happy I am. This has led to an exploring of writing.

In his post Putting a Better Face on Things, Ebert gives a frank and insightful look into his feelings about reconstructive surgery and prosthetics.

Ebert’s journal has produced close to half a million words of honesty that are touching thousands, if not millions, of readers.

Lesson: Use your life experiences to fuel your work and offer others education and inspiration. Be forthright and frank whenever you talk about yourself.

Let your passion save and sustain you

Ebert makes this point loud and clear in the Esquire article: Writing is what saves him.

His journaling has led to a gripping and moving exploration of the art of writing. Writing provides him with continued purpose in trying circumstances.

How many people is he inspiring with this new phase of work? Millions?

Can you do the same? It’s worth thinking about, isn’t it?

Lesson: Your passion can carry you through hardships. If even a fraction of that passion spills into your content, the potential to build your audience and develop true fans is huge. Don’t phone it in. Bare your soul. Engage.

Mark Dykeman is the founder and main brain of Thoughtwrestling, a blog devoted to developing ideas and bringing them to life. He is the author of the award-winning blog Broadcasting Brain. His work has appeared in numerous blogs, including Mashable.com, Dumb Little Man, Pick the Brain, Lateral Action, and Copyblogger.