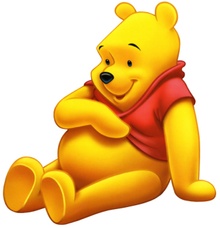 Sometimes, expert advice comes from where you least expect it. Winnie the Pooh himself will tell you he is a “bear of little brain,” but he also has an uncommon, clear-eyed wisdom.

You may have heard of The Tao of Pooh. But what about The Blog of Pooh?

Given that the happiness and feelings of his friends are Pooh’s chief concern (other than hunny, that is), he’d likely build a strong community as a blogger. Here are six social media lessons we can all learn from the lovable bear who’s stuffed with fluff.

Lesson 1: “You can’t stay in your corner of the Forest waiting for others to come to you. You have to go to them sometimes.”

Pooh rarely sat around. In most stories, he was heading out to visit his Good Friend Piglet or perhaps have a little spot of Something with Rabbit. He went to Owl to get advice and to Christopher Robin to get help.

Likewise, you need to get out of your corner and go to people if you want them to come back, read and comment on your blog. Tug on their sleeve. Tap on their shoulder. Pull on their hand. Whisper in their ear. Shout, if you have to. Otherwise, they may never realize your blog exists.

Lesson 2: “If the person you are talking to doesn’t appear to be listening, be patient. It may simply be that he has a small piece of fluff in his ear.”

Pooh was a rather calm bear. Placid, even. He never got upset with anyone. He never demonstrated frustration or glucose-low grumpiness. He was patient to a fault, and simply kept restating what he had to say until someone finally listened.

When you blog, there will be times you feel like no one is listening to you, too. Other times, you’ll feel like readers missed the point completely. Be patient. People really do have fluff in their ears, so work on conveying your message more effectively in your comment section or write up a new post to clarify the concept.

Lesson 3: “You can’t help respecting anybody who can spell TUESDAY, even if he doesn’t spell it right; but spelling isn’t everything. There are days when spelling Tuesday simply doesn’t count.”

One of the reasons Pooh never got upset was because he knew what really mattered. Mistakes happened, and that was okay. Sometimes the group took the wrong path and got lost. That was okay too. The bigger picture was more important than the little hitches along the way.

Blogging means you need to be able to write well, but that doesn’t mean you have to be a crack copywriter. Don’t worry about a typo or two or messing up your grammar if it helps you get your point across. Your message is important, so worry about saying it well – not writing it perfectly.

Lesson 4: “It is more fun to talk with someone who doesn’t use long, difficult words but rather short, easy words like “What about lunch?””

Pooh knew one thing: complicated language and complex terms were confusing. Owl would talk over his head, and all Pooh wanted was a simple, easy solution to his problems. He’d listen to the fluffy explanations and then ask for clarification.

The problem is that your readers won’t bother asking you to clarify. If they find themselves facing words they don’t understand, jargon they find confusing or explanations that take too much time to absorb, they’ll just ignore you. Say what you have to say in conversational, simple language and be done with it.

Lesson 5: “I don’t see much sense in that,” said Rabbit. “No,” said Pooh humbly, “There isn’t. But there was going to be when I began it. It’s just that something happened to it along the way.”

Pooh never panicked when plans went astray. Life continually threw him curve balls and he never seemed surprised. Obstacles cropped up constantly, but that didn’t bother Pooh either. He expected adversity to happen. When it did, Pooh seemed almost pleased, as if he were greeting an old friend come to visit.

That calm acceptance of life would serve bloggers very well. When plans don’t work out, they just don’t – no big deal. You’ve come this far, and you can do it again, so there’s no point in getting stressed out until your seams split. Make a new plan and get on with it.

Lesson 6: “Always watch where you are going. Otherwise, you may step on a piece of the Forest that was left out by mistake.”

Pooh never rushed about the Hundred Acre Wood. He always moved from place to place slowly, carefully and conscientiously. And do you know what? Pooh got everything done in due time. His progress moved forward nicely.

Online, time skews badly and many bloggers end up living by the second instead of taking each day as it comes. Progress seems to be an immediate all-or-nothing game. But remember that if you aren’t watching where you’re going and just rushing about, you may miss out on something rather important.

These six lessons from the Silly Old Bear are just the beginning of Pooh’s wisdom for bloggers. Can you think of any other lessons from Pooh that could apply to the virtual world?