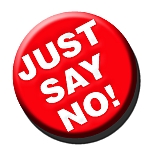 Whenever you write anything, you have a desired message to communicate to a desired audience, whether it’s writing an ad to persuade a customer to buy your product or writing a recipe so that others can make and enjoy your best dish.

Your goal, then, is to inform your audience, not to impress them. What does it matter if they love the words you use but don’t act on the message those words are intended to convey? That’s all you want–to get your message across as clearly and persuasively as possible. Anything that hinders your goal should be eliminated. Thus, you should just say no to the following three enemies of clear and direct writing.

1. Just Say No to Metadiscourse

Metadiscourse is writing about writing and is almost always extraneous and unnecessary. Examples of metadiscourse would be: “to sum up,” “candidly,” “I believe,” “note that,” “it has become clear,” and “I would like to point out.”

An example of a sentence rife with metadiscourse:

“I would like to take this opportunity to extend to you a hearty congratulations.”

The metadiscourse here is basically the entire sentence. There’s no need to tell the person what you’re about to do–just do it. Your whole point is to offer congratulations to someone. Don’t bury it under a bunch of filler. Just say:

“It is my opinion that we should cut taxes.”

“I believe we should cut taxes.”

“We should cut taxes.”

2. Just Say No to Redundancy

Don’t use more words than necessary to describe something. Many writers casually add redundant modifiers to words that can stand on their own.

If someone is screaming, then they’re being loud. Just use the word “screaming.”

“Your own personal cubicle”

“Your,” “own,” and “personal” all pretty much mean the same thing. Better to write, “your cubicle.”

You know what’s wrong with that one. I hope.

3. Just Say No to Pretentious Words

Don’t get out the thesaurus and hunt for intelligent, impressive sounding words that usually aren’t. Many writers believe they have to dress up their copy in order to present themselves as original and gain the attention and respect they want. This usually has the opposite effect.

As soon as you focus on trying to impress your readers, you’ve lost your way. You’ll start searching for just the right words and begin to lose sight of your real objective, which is to make a point and make it clearly. So, stop with the showiness and simply say whatever it is that you need to say.

Examples of pretentious words and their better, simpler replacements:

If you simply focus on getting your message across clearly, and you actually do that, the style and originality and respect will come naturally–as long as your message is a convincing one. So use the words that most clearly and accurately convey your message, words that the broadest audience will understand and remember.

If you have trouble determining whether or not your copy is weighed down with metadiscourse, redundancy, and pretentious words–try this:

Stop writing, get in your car, and drive around your city for a half-hour or so, just reading road signs.

People who write road signs have very little space within which to get their message across; the fewer the words on a road sign, the more likely drivers are to see the words and process the message it’s conveying. Only words which are absolutely necessary to get a message across are chosen–road sign authors must choose the few words they can put on a sign with extreme precision.

Apply this same level of precision and concision to your writing, and it should significantly improve.

In order to make your writing as effective as possible, you’re better off eliminating these enemies of clear and direct communication:

Jesse Hines is a freelance writer and the editor of Robust Writing, a blog exploring how to write clearly and profitably.

Previous article: The Secret Key to Killer Content: Taking Time to Think
Next article: 10 Questions Every Blogger Should Ask Themselves Before Posting