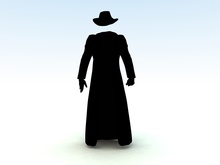 Have you ever felt like your blog is invisible?

You slave away on your posts, pouring every ounce of emotion, creativity, and insight you have into them. You submit your best work to Digg, Del.icio.us, and StumbleUpon, certain that people will vote for your posts and send you a torrent of traffic. You link out to other popular bloggers, desperately hoping that you’ll grab their attention and earn a link in return.

Other bloggers ignore your links, acting like you couldn’t care less about what they wrote. Your posts get buried on Digg. None of the few people who do stop by leave you a comment, telling you to keep going, that you’re doing a wonderful job.

It’s like you’re invisible… and you wonder if there’s anything you can do about it.

Well, I have some good news. Not only can I tell you how to stop being invisible, but I can give you some proven tips and tactics that will have the blogosphere buzzing about you in no time.

Let’s go back to where we last left off…

The Power of Class Clowns

We’ve established that valedictorians make lousy bloggers because they’re boring, and class clowns rule the blogosphere because they’ve become adept at getting noticed. But how do class clowns do it? And why are we so apt to pay attention to them in school?

In one word: value.

Very few teenagers actually want to go to school. They’d rather be playing video games, running around outside, tormenting their siblings, or any number of things. Not because they’re lazy, but because school is both overwhelming and boring. You spend the entire day learning stuff you don’t want to know.

After several hours of it, most students are desperate for a diversion. They’d rather put their attention anywhere than on the teacher or their books. Class clowns are simply the only ones brazen enough to oblige them.

Put another way, class clowns are doing nothing more than responding to a need of the people around them. They’re filling demand. And they are rewarded, not with money, but with the attention of their peers.

Is it really so different than blogging?

People read blogs for lots of reasons. They might want to stay connected to a particular person, learn a valuable skill (like copywriting), or keep up with the news. But I’d argue there’s another reason that we as a community are hesitant to admit:

Blogs are a diversion.

Much like how we pay attention to the class clown to avoid boredom, blogs allow us to procrastinate, avoiding all of the other stuff we’re supposed to be doing. If you don’t believe me, look at the number of people who read blogs at work. Aren’t they supposed to be working?

But they’re not. They’re tired of working and feel like they deserve a break, even if it’s only for a few seconds while they catch up on a few blog posts. Besides, they might even learn something. That still counts as being productive, doesn’t it?

Or so the thinking goes.

If you look at it carefully, it’s really not so different than school. People need a diversion, and we’re the ones that supply it to them.

Bloggers that are invisible online misunderstand their role. They think they’re supposed to become a teacher, when really, that’s only a secondary role. Your first responsibility is a blogger is to get the attention of your prospects, and to do that, you need to emulate the class clown.

Here’s an example. When I started my last blog, On Moneymaking, I poured all of my best ideas into Moneymaking 101, an introduction to the theory of making more money. With so many brilliant ideas, I thought it would be a hit, but it wasn’t. In fact, those posts were some of the least popular on my blog.

Want to know what’s the most popular? The Forrest Gump Guide to Becoming a Gazillionaire, a post I wrote tying Forrest Gump quotes to principles of personal finance. Tens of thousands of people have read it in only a few months.

At first, I found it a little depressing. How could all of my best ideas be trumped by a piece of “cotton candy” content? That’s when I gradually realized that my role as a blogger isn’t to educate the world. People will buy a textbook if they want to learn. They come to me if they want an interesting little diversion with a few valuable lessons.

As soon as I accepted that, growing the blog got a lot easier. I built it to over 1,000 readers in about two months and sold it for a tidy profit.

How to Stop Being Invisible

Write what your readers want to read.

It’s a hard truth to accept. Most of us live in a culture that tells you to “be who you are” and don’t worry about whether anyone likes you or not. Telling people exactly what they want to hear feels… dishonest.

Get over it. If you’re going to be successful online, you need to find the overlap between what you want to write and what other people want to hear. It’s a process every writer goes through, and you’re no different.

Accept that you have to be valuable to your readers. There’s no other way to get (or keep) their attention, and the day you stop is the day they stop reading.

So figure out what they value, and give it to them in an interesting way. Stay turned for my next post, where I’ll show you how to do exactly that.

About the Author: Jon Morrow is an Associate Editor of Copyblogger and co-author of Keyword Research for Bloggers.

Previous article: Are You in the Third Tribe?
Next article: 7 Things to Make Your Weekend Sweeter