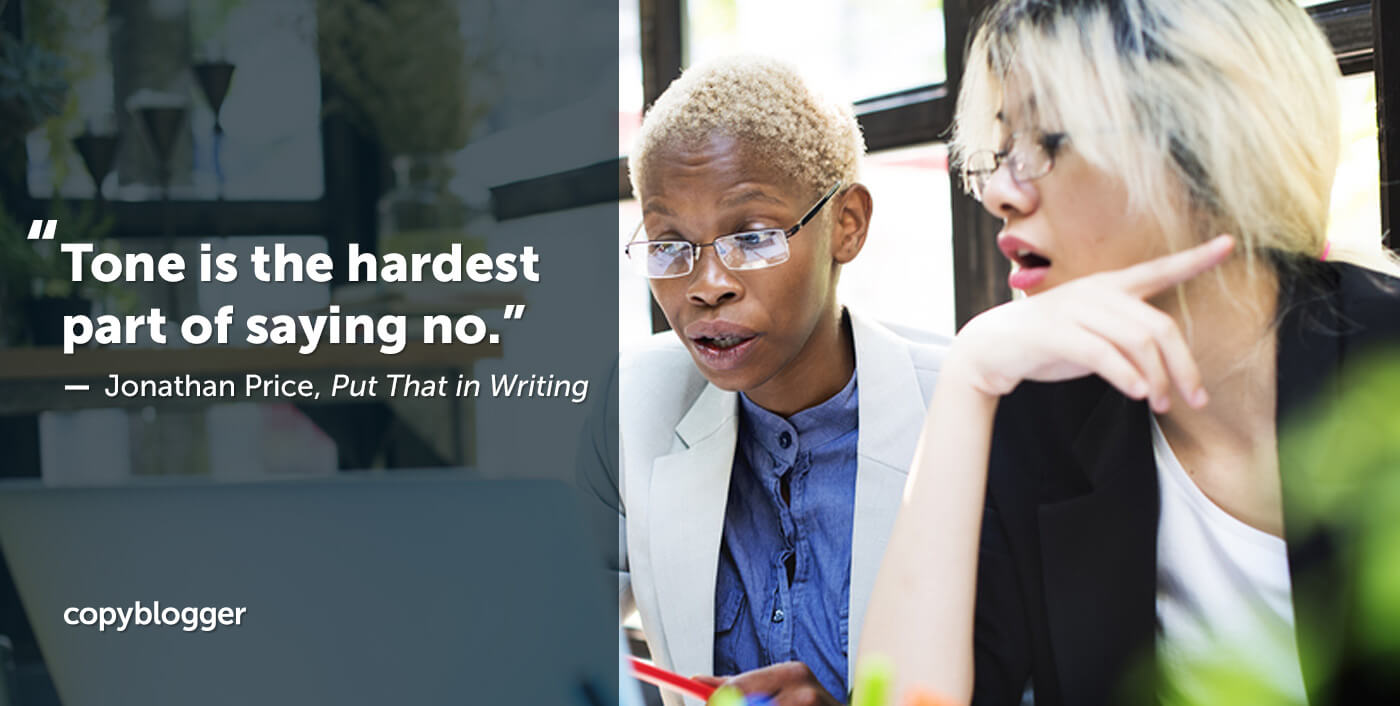 Not quite sure how different types of tone in writing affect your content? Simply think of the statement: “I don’t like your tone.”

Or, you’ve probably heard the adage: “It’s not what you say, it’s how you say it.”

(Actually, if you want to get your message across, you should pay careful attention to both what you say and how you say it.)

When we communicate with our fellow humans, tone of voice helps us convey meaning.

That’s what allows my son, in the time-honored tradition of teenagers, to infuse his monosyllabic agreement to take the dog out with a rich sense of suffering and forbearance.

But text has to work harder.

What are some different types of tone in writing?

Tone is an aspect of writing that helps a reader understand your unique point of view on a subject.

If you use the social web at all, you probably see someone put their digital foot in their mouth virtually every day by making poor word choices.

Add to that the fact that there’s a political or potentially controversial subtext that can be attached to almost any statement, and it starts to feel like a minefield out there.

Because when you get the tone right, your copywriting strategies start to resonate with the perfect audience for your product or service. Then your content can really start to shine.

Tool #1: The words you choose

All careful writers know that there’s no such thing as a true synonym. Every word carries its own set of associations and nuances that shape your writing voice.

Some shades of meaning are fairly neutral. I nearly always prefer use over utilize because it’s clearer and less pretentious. But it doesn’t particularly identify me as having a particular set of values or beliefs.

Other synonyms that carry a more potent cultural charge highlight different types of tone in writing.

Despicable and deplorable seem like they mean pretty close to the same thing. But the first has been colored by a silly and charming series of animated movies. The second is a well-known insult (then claimed as a badge of honor) for supporters of a political figure.

Careful writers chase down the nuances of the language they choose. They think long and hard about the selection of each word. And they strive to choose the word that conveys the subtleties they are after.

Tool #2: The stories you tell

The stories you tell carry nuances as well.

In many ways, The Star Thrower story and the “I don’t have to outrun the bear” joke illustrate the same point.

They’re both about accomplishing the next small but meaningful goal, rather than focusing on overwhelming or impossible ones.

But The Star Thrower story about a lone figure rescuing sea stars on the beach is a favorite of nonprofits, nature lovers, and the more liberal on the political spectrum.

The first story would be a good choice if you’re speaking to The Nature Conservancy. The second would be a better fit for a sales meeting that embraced good-natured but intense rivalry.

Both stories are memorable and effective. But the one you choose depends on who you want to talk to and the nuances you want to get across.

Tool #3: The values you embrace

Types of tone in writing also become relevant when you want to talk about a difficult problem that you overcame.

You could use words like honor, courage, and commitment — which happen to be the stated values of the U.S. Marine Corps.

Simple, ordinary English words can often connect you to a larger cultural context.

A strong point of view in your writing will help you attract the right people, but in some cases, ultra-specific language might be viewed as divisive. I think of it as identifying the people who resonate with you — and not worrying too much about the people who don’t.

(You might find these pointers on how to respond to criticism useful.)

The weight of connotation when evaluating types of tone in writing

Today, every seemingly innocent pop culture reference can carry the weight of connotation.

Enjoyed the last comic book or science fiction movie you saw? Your choice of favorite pop cult character can send a message to your audience about your larger worldview.

Comic artist Matt Furie found this out to his chagrin when his easygoing character Pepe the Frog was embraced by white supremacists and neo-Nazis. (It should be pointed out that this was never Furie’s intention. Many people innocently reference the goofy frog character.)

It would be nice if there was a giant decoder ring to look up the connotations attached to various references, but alas, the environment moves too quickly.

Sites like Know Your Meme are helpful, but the best way to stay current is just to keep your eyes and ears open on social media. Stay attuned to how messages are moving through the culture … and specifically, to the people you care about talking to.

If all of this chasing down nuance, meaning, and connotation sounds like too much work, keep in mind that your first duty as a marketer is to understand your audience.

Do they have strong reactions to Pepe? You need to know what those are.

If they have no idea, you can safely move on to what they do care about as you uncover the different types of tone in writing that connect with your readers.

Embrace nuance and connotation not just to find out what you don’t want to put your foot in, but to choose the right language and stories. The ones that will make the strongest connections with your audience about their values and beliefs.

Previous article: Does Your Blog Need Proofreading and Editing?
Next article: What Is the Main Action a Writer Takes When Proofreading?