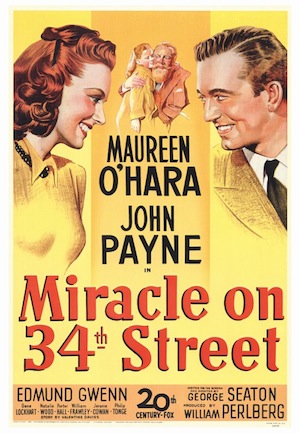 Like a lot of people, every year my husband and I watch Miracle on 34th Street during the holiday season.

One of my favorite scenes in the movie is right at the end when Natalie Wood is riding in the car with her mom and Fred Gailey.

The camera focuses in on Natalie sitting in the back seat of the car staring out the window looking bored and kind of annoyed, mumbling “I believe, I believe …”

Then, there’s a moment where the camera closes in a bit on her eyes as they widen in shock.

The camera angle switches and you see Natalie running up the hill to the house that she had asked Santa Claus to give her.

When it works, the writing takes someone from a neutral state of bored indifference to excitement.

I think of that split-second transition as the “magic moment.”

Considering Natalie Wood was only 8 years old when the movie was made, she does an amazing job of conveying just what happens during that magic moment when suddenly something that seemed impossible becomes real.

To reach that magic moment in your copywriting, here are a 5 secrets you can learn from an 8-year old Natalie.

People don’t respond to boring. In fact, one of the worst insults an 8-year old can throw at you is “that’s boring.”

A story like, “What if Santa were real?” gets the attention of pretty much everyone, even those with short attention spans.

It gets people talking.

In Miracle on 34th Street, even the grandkids of the district attorney knew about the legal case. (And thought grandpa had a whole lot of nerve picking on Santa.)

Is your message something worth sharing? Could it be?

2. You need a big vision

Unlike most kids, instead of asking for a toy, Natalie Wood asks Santa for a house. She hands Kris Kringle a magazine photograph of a house and explains that she doesn’t want a dollhouse. She wants a REAL house.

She says, “If you’re really Santa Claus, you can get it for me. And if you can’t, you’re only a nice man with a white beard, like mother said.”

Natalie had a big vision for what life would be like living in a house in the suburbs versus living in an apartment in the city.

She doesn’t like her Manhattan apartment, and explains that her house would have a back yard with a big tree to put a swing on. She had a clear picture of exactly what she wanted.

With your writing, can you paint a transformative picture that inspires people to fill in the rest using their own imagination?

3. You need a big emotion

People do almost everything for emotional, not rational reasons.

It’s been said that Santa Claus doesn’t need a marketing department. What’s not to love about free gifts for boys and girls around the world? And the “spirit of Christmas” embodies noble emotions like generosity, love, and compassion.

In your writing, you need to tap into emotions, whether they are noble like generosity or more negative like fear, greed, and vanity.

After all, there’s no logical reason to believe in Santa Claus or ever eat M&Ms, cookies or doughnuts. Yet people do. Krispy Kreme and Mrs. Fields are ample proof of that.

Why do people continue to buy fat-laden doughnuts and cookies? Because they taste yummy and eating them makes you feel good.

What are your reader’s biggest pain points? What make him feel good?

Natalie Wood wants to believe that Kris Kringle is really Santa and looks for proof. At Macy’s she sees him speak Dutch to a little girl and is thrilled to discover he’s not wearing fake padding on his jolly tummy. Then when she tugs on his beard, it doesn’t come off!

She’s excited to tell her mom what she’s learned, but mom raises objections. “Many men have long beards like that” and “I speak French, but I’m not Joan of Arc.”

Many types of proof exist. For example, you might include testimonials in your copy, but that might not be enough. You may need something bigger.

In the movie, the ultimate proof is the existence of the house. (And the real magic is finding the cane tucked into a corner.)

Are you giving people enough reasons to have faith in what you offer? (“Faith is believing in things when common sense tells you not to.”)

5. You need to believe

People want to believe a lot of things they think they can’t do. They might secretly want to travel around the world or write a book.

Generally, there’s no real reason why these people couldn’t travel or write; they just think they can’t.

Good copywriting taps into the emotions and dreams people want to believe anyway. Natalie Wood wanted to believe that Santa would bring her a house, but “common sense” kept telling her it would never happen.

Does your writing give people the joy of realizing a dream they want to believe is possible? Could it?

Of course, in the movie, the logistics of actually buying the house, mom and Fred getting married, moving, and so forth work themselves out. By then, it’s just details.

That’s true of great copy too.

Once the magic moment happens, there’s no turning back.

Susan Daffron is a content marketer for a huge technology company and the author of the Alpine Grove Romantic Comedies, a series of novels that feature residents of the small town of Alpine Grove and their various quirky dogs and cats. She is also an award-winning author of many nonfiction books, including several about pets and animal rescue. You can read more about her at SusanDaffron.com.

Previous article: 3 Simple Steps for Staring Down Writer’s Block
Next article: There is No ROI in Social Media Marketing