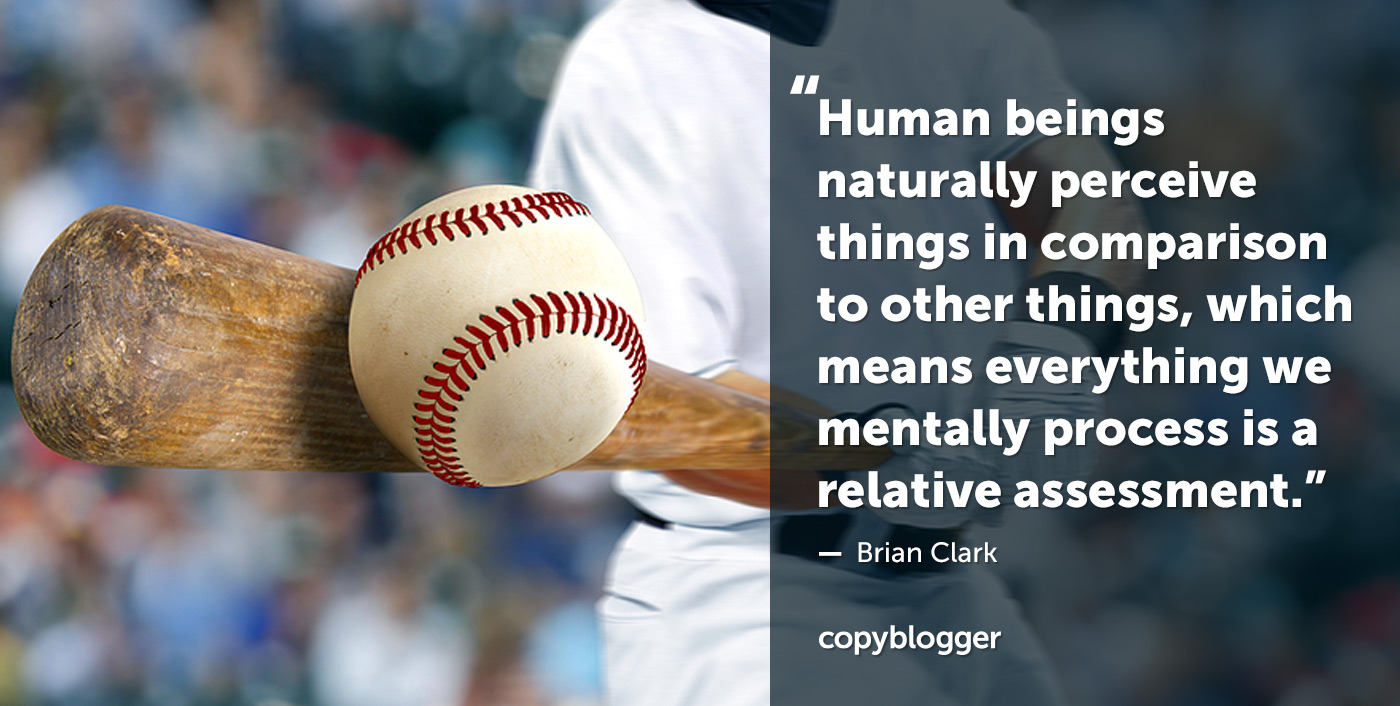 Have you ever watched a baseball player on deck to bat next? You’ll notice that batters often place a weighted ring around the bat while doing warm-up swings.

Why? When the player steps up to the plate, the bat feels relatively lighter. This helps the batter swing faster when a hot fastball comes blazing down the middle.

It doesn’t matter that the bat isn’t really lighter. From a psychological standpoint (which is where world-class athletes leave average players behind), the batter feels like he has a stronger, faster swing. That mental edge makes a difference.

This phenomenon is known as perceptual contrast.

Human beings naturally perceive things in comparison to other things, which means everything we mentally process is a relative assessment.

Perceptual contrast is an effective persuasion technique because a skillful copywriter can alter the way a prospective buyer perceives a product or service, even though there’s been no actual change to the offer.

So, how can you use it to boost your own sales?

In the book Yes! 50 Scientifically Proven Ways to be Persuasive, the authors share a real-world example.

A company selling high-end hot tubs at $15,000 a pop heard from customers that having the tub was like adding another room to the house. The company incorporated that bit into their sales messages, and contrasted the price of the tub with the cost of a room addition (which runs at least $30,000).

Here’s another perceptual contrast technique. Social psychologists have found that the relative amounts of information provided about two different offerings can influence how people feel about the second offer.

In other words, when a small amount of information was revealed about Product A just before discussing Product B in detail, test subjects had a higher opinion of Product B than if Product A was also discussed at length or if there was no Product A at all.

For example, say you’re doing an affiliate promotion in an email or blog post. Rather than simply focusing on the product you’re specifically recommending, talk briefly about a competing product.

You don’t have to trash-talk the other product. You just have to mention it first and then go into an extensive review of the product you’re really trying to sell.

Perceptual contrast should do its magic and increase sales in comparison to a review that didn’t mention the other product. Give it a try.

Previous article: Writers Working for the Weekday
Next article: Try This to Find an Extra 30 Minutes to Write, Even on Your Busiest Days