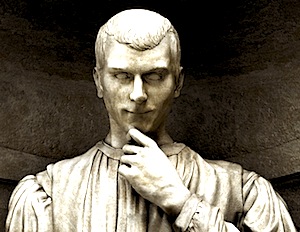 What does it take to get people to pay attention to your content?

I think we’ve all read a great piece of writing and thought to ourselves, “Why isn’t this more popular?”

(And hey, maybe you even feel that way about your own work!)

I obviously can’t answer the entirety of that question in a single blog post, but I will tell you that there is a trait that many popular works of writing seem to share: they are controversial.

It’s easy to see why controversy spawns from strife between two (or more) groups of thought. It leads to debate, debate leads to recognition, and more and more people trip over themselves to share their thoughts.

You can see the powerful effects of controversy in action when you examine the work of Niccolo Machiavelli, the notorious political scholar whose magnum opus, The Prince, is still hotly debated to this day.

But one has to ask: Why is such a distinguished thinker only recognizable to the average Joe from a single book?

What about The Prince makes it so memorable? How is it able to stay relevant and widely discussed hundreds of years later? More important, how can you apply these lessons to your own content?

How to avoid being forgotten

Honestly, when you think about Machiavelli … does anything other than The Prince readily come to mind?

For most people, that answer is No, even though he was a prolific political scholar with many published works. If that’s the case for you, don’t feel bad, there’s a simple reason why The Prince is so easily recognized and the rest of Machiavelli’s work is not, and that reason is controversy.

While the teachings from The Prince still stir debate even to this day (the sure sign of a truly controversial topic), you may not know that the book caused quite an uproar back when it was initially published.

It was outright banned by the Catholic church, after being officially added to the Index Librorum Prohibitorum, and many scholars panned the book’s premise: how dare Machiavelli contrast the teachings of Plato and Aristotle!

Sounds like the book should have never found an audience with such a harsh backlash, right? And yet, the influence of the work on many notable figures throughout history is undeniable.

Not to equate the works of Machiavelli to your typical blog post, but I can’t help but notice that many aspects surrounding the book’s success seem to relate back to gaining attention online:

A majority of modern-day academics now consider The Prince to be a work of satire.

(Notice I said a “majority”, as the debate has become something of, yes, a controversy.)

This is because there is ample evidence that the intended goal of The Prince was to inform the public of the insidious nature of dictators, and give a candid look at the tactics that they would use to control the populace.

Many scholars argue that those in power would have already known this stuff anyway.

So, why would Machiavelli write The Prince in this way?

To me, there are two clear answers:

Machiavelli was in danger of being forgotten, because many of those who pulled the strings were unwilling to allow something like his Discourses on Livy to see the light of day.

You, however, have a different problem: With the benefit of being able to write whatever you want, your concern is being forgotten and buried in a sea of less worthy content.

Fortunately, you can use controversy to avoid this dreadful fate and capture the attention you need to build a thriving audience online … and you can do it without making people hate you.

How to cause an intelligent uproar

One of the main reasons that The Prince is so controversial (and thus so memorable) is that it creates division among two different groups of thought.

The debate over whether or not ‘The ends justify the means’ is one that has raged long after Machiavelli’s death, and that will continue to divide people for years to come (despite the fact that Machiavelli never actually said it in The Prince).

There are a few reasons why this is important for creating controversy:

Let’s break this down, shall we?

1. Using division to get people invested

What’s a proven way to get people more invested in a cause, argument, or belief?

Give them an enemy.

According to the fascinating study on Social Categorization and Inter-group Behavior, the quickest way to get people to form groups is to give them another group to compete against.

The lead researcher Henri Tajfel found that when people were divided by even the most trivial of choices, they were still willing to hand out real rewards to their ‘in-group,’ and would readily discriminate the other ‘outsiders.’

As a behavioral psychology geek, this study fascinates me because it’s a proven example of why people can become so heated over arguments that seem pointless to a third party. Often, it’s the division between groups as much as the argument itself that creates the controversy.

Machiavelli’s work in The Prince created a clear divide that subsequently built two groups of thought that vehemently disagreed with one another, an essential ingredient for creating controversy.

As we’ve seen, division works because it turns a casual discussion into a heated debate by pitting people against each other.

But it works best when it’s able to trigger ‘high-arousal emotions’ from those who are partaking in the debate.

Recent academic research from Wharton on What Makes Online Content Go Viral shows that the content that is most likely to go viral is any work that evokes a strong emotional reaction from the reader.

Specifically, the emotions of Awe, Anger, Anxiety/Fear, Joy, Lust, and Surprise were most effective.

You’re over-thinking the execution of this strategy.

If you’ve read Copyblogger’s great guide on Magnetic Headlines, you will recognize headlines like ‘7 Warning Signs that …,’ which create anxiety in the reader but still deliver solid value.

Now you know you need to plant your flag in an argument, you know your writing needs to trigger a strong emotion … but how can you keep people from hating you for it?

(Psst … pay attention, this next part is where most people get stuck!)

Most businesses stay away from controversial content because they are too scared that it may reflect badly on their brand.

It will … if you do it the wrong way.

The wrong way is picking a random fight or trying to be ‘shocking’ in order to stir up controversy.

The right way is being the voice of reason for a topic of ‘low’ controversy, and planting your flag on the side that you can argue the best.

But why would you want to pick a topic of low controversy? That defeats the purpose, right?

According to academic research on When, Why, and How Controversy Causes Conversation, if you want to get people talking online, it’s best to avoid topics of ‘high’ controversy on your business blog.

Why? According to the researchers:

In other words, people don’t like to discuss highly controversial topics (especially outside of the news) because it can make them look bad for bringing it up.

There are a few other things to consider …

In a recent podcast with Derek Halpern and professor Jonah Berger, Jonah mentions how even toilet paper can be remarkable, and Derek offers up this example as a case study for how seemingly silly arguments can go viral online.

The topic of toilet paper orientation (yes, that is a 6,000 word Wikipedia article on the subject) is hotly debated online, despite the fact that no one could possibly be offended by it.

As the research and this silly example prove, you don’t need to be highly controversial or hurt people’s feelings to create something that divides people and stirs up debate.

From Machiavelli to toilet paper and back again

Machiavelli has shown us that it often takes a bit of controversy to be remembered, and that the best way to stir up such a debate is to create division … but do we really have to start arguments about silly topics like toilet paper?

Consider these following examples of articles that took off because of the combination of division and controversy:

All of these topics were incredibly important within their tribe, and serious discussions formed in the comments of all three articles.

The point being, you don’t provoke mindless arguments to effectively use this strategy, you simply have to challenge a certain group’s 3B’s (behavior, beliefs, belonging), stay relevant, and you’ll be on your way to creating something the whole industry is talking about.

Now I want to hear from you. What’s your favorite piece of controversial content that you’ve read recently? What sort of division did it create? Let us know in the comments.

And to get more research-backed content on marketing, feel free to download my free guide on 10 Ways to Convert More Customers (Using Psychology).

Previous article: The Surprising Conversion Power of Priming and Conformity
Next article: “Content” Isn’t a Buzzword, It’s the Future of Your Business