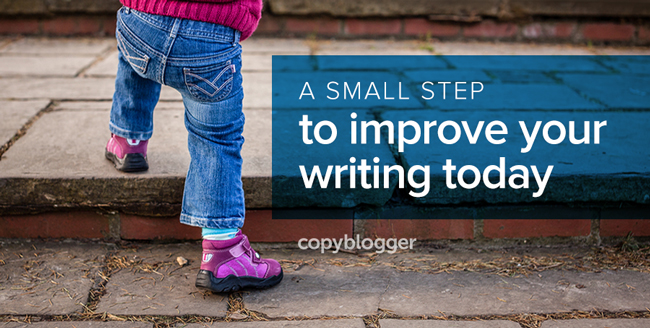 You want to become a better writer.

I know this because you’re reading Copyblogger.

I also know that you fear becoming a better writer.

This I know because you must change to become better and to fear change is to be human.

But what if I told you that you only need to change one thing — one small thing — to achieve your goal of becoming a better writer?

Would you believe me?

You should. It’s not just theory; it’s science.

One small step really can change you.

“Unleash the potent force of kaizen”

Those are the first six words on the book jacket of One Small Step Can Change Your Life, the bestseller by Robert Maurer.

That is exactly what I want this post to do: unleash the potent force of kaizen … in your writing.

Kaizen is a Japanese word that represents the process of achieving sustained success through small, steady steps.

The concept originated in Depression-era America before being introduced in Japan by General Douglas MacArthur after World War II. There, it took hold and became a driving force in Japan’s economy, which grew into one of the most robust the world had ever seen.

Now, thanks to books like Maurer’s, the concept has gone from macro to micro, and become a proven driver for individual development.

So, let’s go even more micro.

Rather than change your life (that’s what the book is for), I want to help you change as a writer — in one small but significant way.

Sometimes all it takes is one tiny step to propel you with momentum on a path of continuous development. But you have to take that first step.

Here are a handful of ideas for small changes you can make right now that will improve your writing.

Stephen King believes that adverbs are “not your friend.”

In his book On Writing, King goes so far as to say that “the road to hell is paved with adverbs.”

I don’t know if I would go that far, but I do agree with this quote from him:

They’re like dandelions. If you have one in your lawn, it looks pretty and unique. If you fail to root it out, however, you find five the next day … fifty after that … and then, my brothers and sisters, your lawn is totally, completely, and profligately covered with dandelions. By then you see them for the weeds they really are.

King’s hatred for adverbs is well-reasoned. He believes they were “created with the timid writer in mind” and tell us the writer “is afraid he/she isn’t expressing himself/herself clearly.”

Write what you mean and mean what you write.

Mark Twain instructed us to “employ a simple and straightforward style.” Adverbs are neither. They are, more often than not, vanities that offer little benefit to the reader.

Start paying attention to your adverb usage. Be judicious.

Then write and edit accordingly.

The words are important, but they are just part of the show.

Writers do their research, open up a blank document, have their notes handy, block out the world, and then focus on the words and only the words.

Editing, linking, embedding, etc., can always be done after the first draft is complete.

But you can never duplicate that uninterrupted wave of initial thought and inspiration. In my experience, once it’s gone, it’s gone.

Do you blog, or do you write?

Try writing when you create content. Focus solely on the ideas in your first draft.

Maybe it doesn’t matter whether you are writing or blogging. Maybe your issue is discipline.

Don’t fret. You are not the first to struggle with this, and you won’t be the last.

Sometimes the single hardest aspect of writing is simply putting your rear end down in the chair and … writing.

If you could make a small change that would increase the amount of time you write, you’ll increase your chances of becoming a better writer.

So why not try the technique that worked for Eugene Schwartz, one of the most legendary copywriters of all time?

It’s incredibly simple: just set aside certain times each day when all you do is write.

If you end up staring at the blank screen producing nothing, so be it. More likely, boredom will overcome you at some point, and you’ll start to write something.

Something is better than nothing. And every time your butt is in the chair writing, you’ll get better.

You still might be intimidated by the blank page, even if you confine yourself to a chair for a prescribed period of time. In fact, sometimes it can make the pressure more acute.

The vast white expanse and blinking cursor can get to the best of us.

The next time this happens, turn to a friend.

I don’t mean literally. While talking about your ideas with someone may help in some circumstances, you won’t actually be writing.

Instead, picture a friend — preferably someone who is also part of your target audience — receiving the document you’re about to write. Your only goal is to explain your idea to him.

Go so far as to write Dear So-and-So at the top of your document (I do).

Now, instead of writing to no one and everyone all at once, you’re writing to one person.

It’s like composing an email; the ideas flow naturally and with less pressure.

You’ll edit to smooth out the rough edges, but the ideas have to come first.

Anything you can do to coax uninhibited ideas out of your mind will make you a better writer. A small shift in thinking at the beginning of your writing session may be all it takes.

5. Steal from other writers

Settle down. I’m not talking about plagiarism here.

I’m talking about studying other successful writers, seeing what works for them, and incorporating new practices into your own writing sessions.

That’s right: your one small step doesn’t even need to be an original idea.

Just adapt what has worked for another writer — like the timed writing sessions above — and see if it works for you.

Maybe you decide to see if waking up at 3:00 a.m. works as well for you as it does for David Meerman Scott.

Maybe you commit to emptying your bladder and filling up a water bottle before sitting down to write, like Lisa Barone.

Maybe you turn off your phone before writing, like Daniel Pink.

Maybe you try listening to jazz while you write, like Seth Godin.

Maybe you try all of these strategies and none of them work for you. Great!

Just by trying them, you’ve changed. You’ve initiated the process of improvement. You’ve figured out what doesn’t work, thus getting closer to what does.

Writing may be a solitary act, but the process of becoming a better writer doesn’t need to be.

6. Order a set of bathtub markers

If you’re like me (and countless other writers I’ve talked to), your best ideas come to you in the shower. There’s plenty of science to back this up.

Yet, like an idiot, I have never devised a good system for capturing my epic shower ideas.

Sure, I’ll try to remember them and record them once I get out of the shower, but all too often I forget a brilliant thought and am left lamenting the loss.

It finally dawned on me that my shower passivity has cost me a lot over the years:

Compared to such costs, the $7.55 Amazon charges for bathtub markers is a bargain!

Now I can write down what I’m thinking on the shower wall and record it later. (If your shower walls won’t allow for this, go with Aqua Notes.)

As writers, our ideas are our most precious assets. Don’t let any more go swirling down that shower drain.

Recording just one great idea that you would have otherwise forgotten will make you a better writer. Just think how powerful this one small step could be if it became a habit.

You want to become a better writer, and I’m not asking you to make any bold, sweeping changes to your life in order to get there.

Just do one thing.

Maybe it’s one of the six steps described in this post, or maybe it’s something else. But by taking just one step in the direction of becoming a better writer, you make yourself ready for step two, and then step three, and so on.

Let me end with a few immortal words from Lao Tzu …

A journey of a thousand miles must begin with the first step.

You’ll be a better writer tomorrow than you are today.

Share the first step you will take over on LinkedIn …

Editor’s note: The original version of this post was published on May 8, 2013.

Previous article: Your Top-to-Bottom Email Checklist: What to Include Before You Hit Send
Next article: Authority: Our Community of Professional Content Marketers