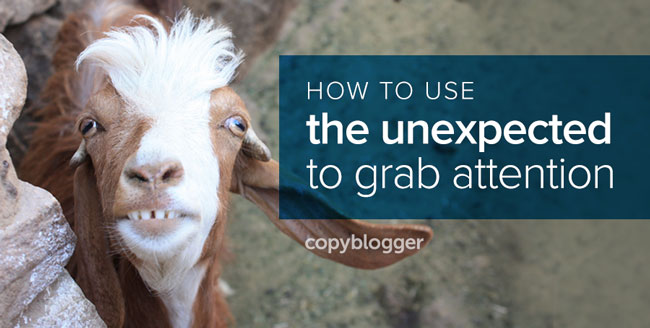 Here’s the thing: nobody can deny that there is more content out there than ever before. But I don’t think the challenge this creates for content marketers is any more unique than 60 years ago or 600 years ago.

In the face of so much content, yes, we are shocked — but after the shock wears off, we adapt. Because we are really freaking excited about the possibilities.

And because we, as readers, can develop skills that allow us to navigate through this world without getting swallowed alive, it’s only natural that we, as content marketers, can too.

By “adapt,” I mean find new ways to stand out with content that makes an impact. And one way to do that involves illegitimate ideas.

What is an illegitimate idea?

An illegitimate idea is one that is unnatural — a mongrel. We don’t know its origins. It comes out of left field and is so surprising and disruptive that we halt and pay attention to it.

Your brain might hold one half of the idea until two years later when the perfect complement appears out of nowhere and you marry the two (or three or four) concepts — and there you have it: an illegitimate idea.

Typically, I don’t watch videos unless they are less than 20 seconds and about pro American football, but the other day I watched a four-minute promotional video for Google Maps. It was about scaling El Capitan in Yosemite National Park.

It was unnaturally good content for a rock climbing fan.

And they are off to a great start:

Before I teach you how to create illegitimate ideas, here are three more article examples from Priceonomics, a service that helps companies crawl data from the web:

What? These topics from a data company? That’s absurd. Indeed.

Since illegitimate ideas that are fascinating aren’t easy to create, here are three ways to help you generate them.

The beautiful things about the Internet are also the worst: easy access to publishing tools creates an environment where research amounts to scraping what the last guy did.

And because of this standard of shallow research, over time content becomes derivative and the echo chamber lives on.

As professional content marketers, we need to beat this temptation and take a cue from Hungarian physicist Albert Szent-Gyorgyi, who said:

Your job is to identify that topic or specific angle on a subject never-before explored — and expose it. Doing this requires intense research and deep thinking.

Look again at some of the examples of illegitimate content ideas I shared above. While these ideas may seem bizarre and unnatural, the truth is, they’re not. Each idea is rooted in an ancestor idea. In most cases, some type of cultural icon.

The writers simply took something primal to our national or international psyche and twisted it to fit what their audiences wanted.

The lesson for you: indulge in some strange dimensions. Read classic comics or watch cult films. Pillage the bank of past creative work and warp it to work for your audience.

You get ideas when you ask yourself simple questions. The most important of the questions is just, What if …? (What if you woke up with wings? What if your sister turned into a mouse? What if you all found out that your teacher was planning to eat one of you at the end of term — but you didn’t know who?)

It’s when you ask those strange questions that your illegitimate content idea begins to emerge. And when it does … write yourself silly.

Here’s how a few content marketers asked, “What if?” in the fitness and food industries:

How do the deaf enjoy a rap concert? What’s life like when the government thinks you are dead? And why does such a hip city like Portland have so many strip clubs?

Get readers to do a double take

Let me close with a short story.

I have this friend. He loves historical romance fiction and reads everything he can get his hands on. The library has a milk crate just for him of all the books he requests. His Kindle library is 1,000 titles strong. He often reads books twice — by mistake.

When I was at his house and glanced at a few of the titles he’s reading, I realized that there are a million and one ways to twist a historical romance fiction idea so this guy will always have something to read.

It reminds me of a quote from Erin Kissane, author of The Elements of Content Strategy:

The fact that anyone reads anything at all online is a demonstration of an extraordinary hunger for content.

In other words, you, content marketer, don’t have to uncover an earth-shattering idea each and every day. You just have to corrupt the average enough to get people to do a double take.

See, we want to consume. We want to read. Watch. Listen. And we will keep coming back for more and more as long as you keep us slightly off balance.

How do you surprise your audience with illegitimate ideas?

Previous article: How One Entrepreneur Grew a Digital Business to Fit Her Life
Next article: How Pamela Wilson (VP of Educational Content for Copyblogger) Writes