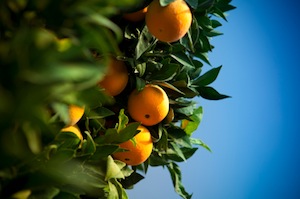 A few years ago, I ran my first marathon in Seattle.

I’d love to tell you I ran strong to the finish, but by mile 18 I was wiped out, focusing entirely on putting one foot in front of the other. As I trudged along in the final hour, I spotted a volunteer handing out fresh orange slices on the side of the road ahead of me.

Tired as I was, I made sure to change my position, slow down, and gratefully accept the gift. The piece of fresh orange was an offer I couldn’t refuse — even though it was free, I would have gladly paid for it if I’d had the money and was in the right frame of mind to have a conversation.   Two miles ahead, I saw another volunteer handing out a different gift: halves of Krispy Kreme donuts. Unfortunately, this offer did not excite me (or any other runners I saw) at all.

I’m no puritan. I’ve have eaten more than my share of donuts over the years. But three hours into the longest race of my life was bad timing for a sugar rush. The offer was unattractive and a poor fit for the context.

Ironically, there were no donuts available after the 26.2-mile race, something many runners would have been thrilled to see. Keep this in mind if you are ever in charge of providing donuts for marathoners.

An offer you can’t refuse

A compelling offer is like a slice of orange at mile 18.

It’s a marriage proposal from the guy or girl you’ve been waiting for your whole life.

An offer you can’t refuse is like the $20,000 Bonderman Fellowship offered every year to graduating seniors at the University of Washington. The fellowship has very strict rules: Take our money in cash and travel the world on your own; don’t come back for eight months. Oh, and once in a while send us a quick note so we can tell your parents you’re alive. If you’d guess that hundreds of students compete for the fellowship every year, you’d be right.

So how can you construct an offer that your prospects won’t refuse?

Remember, first you need to sell what people want to buy — give them the fish. Then make sure you’re marketing to the right people at the right time.

Sometimes you can have the right crowd at the wrong time. Marathon runners are happy to eat donuts after the race, but not at mile 18.

Then you take your product or service and craft it into a compelling pitch … an offer they can’t refuse.

Here’s how you do it.

1. Understand that what we want and what we say we want are not always the same thing

The next time you get on a crowded plane and head to your cramped middle seat in the back, with a screaming infant seated behind you at no extra charge, remember this principle.

For years travelers have been complaining about crowded planes and cramped seats, and for years airlines have been ignoring them. Every once in a while, an airline creates a campaign to respond to the concern: “We’re giving more legroom in coach!”   It sounds great, but a few months later they inevitably reverse course and remove the extra inches of space. Why?

Because despite what they say, most travelers don’t value the extra legroom enough to pay for it; instead, they value the lowest-priced flights above any other concerns. Airlines have figured this out, so they give people what they want — not what they say they want.

A good offer has to be what people actually want and are willing to pay for.

An offer you can’t refuse may apply subtle pressure, but nobody likes a hard sell.

Instead, compelling offers often create an illusion that a purchase is an invitation, not a pitch. Social shopping services such as Groupon have been successful in recruiting their customers to do most of their marketing for them. Indeed, the biggest complaint about these businesses is that they sell out of deals too quickly, also known as “They won’t let me give them my money!”

As you might imagine, the path of least resistance is a good place to stand.

Marathon runners do not need to be sold on the benefits of fresh oranges after three hours of running. Adventurous college students will grasp the value of a $20,000 “go travel somewhere and do what you want” fellowship without much explaining.

Here’s an exercise that will help you put together the offer your audience won’t be able to refuse.

What are the main objections to the offer?

How will you counter these objections?

After nearing the end of a five-hour drive from Boise to Salt Lake City, I stopped off at a Starbucks about twenty minutes away from the bookstore I was speaking at that evening.

On the way inside, I grabbed something from the trunk and left the keys inside. Nice move, Chris. It was even worse because I didn’t realize my mistake until I had finished my latte and email session an hour later, shortly before I was due to arrive at the bookstore.  I was mad at myself for being so stupid, but I had to think quickly.

Using a combination of technology (iPod touch, MiFi, cell phone), I located the number of a local locksmith and quickly rang him up. “Uh, can you please come as soon as possible?” He agreed to be as fast as he could.

Much to my surprise, the locksmith pulled up in a van just three minutes later. Impressive, right? Then he got out his tools and approached the passenger door. In less than ten seconds, he had the door open, allowing me to retrieve my keys from the trunk and get on with my life. “How much do I owe you?” I asked. Perhaps it’s because I don’t own a car and the last time I paid a locksmith was ten years ago, or maybe I’m just cheap, but for whatever reason I expected him to ask for something like $20. Instead, he said, “That will be $50, please.”

I hadn’t discussed the price with him before he came out and was in no position to negotiate, so I gave him the cash and thanked him. But something was unsettling about the transaction, and I tried to figure out what it was.

I was mad at myself for locking my keys in the car — it was obviously no one’s fault but my own — but I also felt that $50 was too much to pay for such a brief service.

As I drove away, I realized that I secretly wanted him to take longer in getting to me, even though that would have delayed me further. I wanted him to struggle with unlocking my car as part of a major effort, even though that made no sense whatsoever. The locksmith met my need and provided a quick, comprehensive solution to my problem. I was unhappy about our exchange for no good reason.

The problem of perceived value

Mulling it over, I realized that the way we make purchasing decisions isn’t always rational. I thought back to something that had happened in the early days of my business. I had produced a twenty-five-page report on booking discount airfare and sold it for $25. Many people bought it, but others complained: Twenty-five pages for $25? That’s too expensive.

I knew I couldn’t please everyone, but I didn’t understand this specific objection.

The point of the report was to help people save money on plane tickets, and many readers reported saving $300 or more after one quick read. What does the length of the report have to do with the price? I remember thinking about that one complaint.

If I gave you a treasure map, would you complain that it was only one page long?

It turned out the joke was on me: All of us place a subjective value on goods or services that may not relate to what they “should” be.

Just as what we want and what we say we want aren’t always the same thing, the way we place a value on something isn’t always rational. You must learn to think about value the way your customers do, not necessarily the way you would like them to.

The good news is that when you do understand what people want, everything else gets a lot easier.

Like the orange slice at mile eighteen of the marathon, an offer you can’t refuse comes along at just the right time. As you follow your blueprint to freedom, think carefully about how you can create a similarly compelling offer.

The next step is to take your offer out into the world. Are you doing that?

Chris Guillebeau is the New York Times bestselling author of The Happiness of Pursuit, The $100 Startup, and other books. During a lifetime of self-employment, he visited every country in the world (193 in total) before his 35th birthday. Every summer in Portland, Oregon he hosts the World Domination Summit, a gathering of creative, remarkable people. His new book, Born for This, will help you find the work you were meant to do.

Connect with Chris on Twitter, on his blog, or at your choice of worldwide airline lounge.

Previous article: 3 Ways to Fix Your Broken Marketing
Next article: 20 Mistakes that Will Undermine Your Call to Action and Cost You Sales