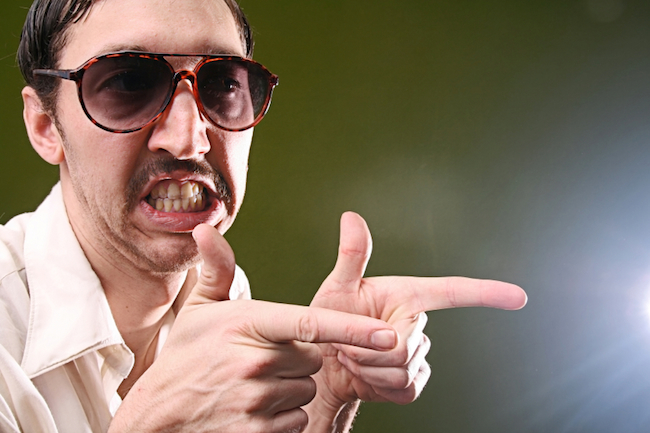 That’s what they say, and that’s what he said to me.

Dangle $14 an hour in the face of a 14-year old kid, and I’m in. It helps that my buddy was going to do it too: go door to door and hustle porch renovations.

“In six months you could have enough money to buy a car,” he said. Just in time to get my permit. Independence beckoned.

The only problem was I hated selling door to door. I didn’t show up my first day.

You’d think I would have learned.

Then there was the time I was a waiter. Somehow I lasted three miserable months. It seems people don’t tip waiters who view customers as leeches.

From there I became a busboy, then a prep cook, and finally a line cook (a stint that lasted one week), before I got out of the restaurant business altogether.

What the hell was I supposed to do?

I’m a man. I’m supposed to make a living. But everything that I did — every job that was abundantly available — I hated. And manual labor was out of the question.

The only thing that I wanted to do was write. But it seemed all the advice I ever got about writing was that it was a great hobby … but no way to make a living. “Be practical, son.”

I was trying to be. But it seems like it was killing me.

A hustler, in context

Fortunately, through a series of circumstances, I finally got the green light I needed to follow my calling. I finished college with a degree in English Literature, took a job in advertising, and fell in love with the discipline.

This was also the first time I worked on the Internet (early 2001). It impressed me since I could find the email address of just about anybody I cared about, mostly writers, and harass them. And they wrote back!

I heard from T.C. Boyle, John Carlton, Billy Collins. A dozen names I forget. It was an inner circle I got to be a part of, because of the Internet. And over time I slowly learned that I wasn’t allergic to hustling — if by that word you meant hard work.

But if you meant “working a room, meeting strangers and prospects at coffee shops, knocking on doors, calling strangers, or chumming it with colleagues on a golf course,” well …

Then yeah, I’d rather starve. Just like my boss Brian Clark.

For people like us, the Internet is a godsend. It’s a perfect medium where communication, connection, and commerce merge. And you don’t have to even pick up the phone. Ever.

This eight-letter word kept me out of financial ruin

Ever stay in a job too long?

I did that for about 18 months. While the pay was average, the benefits were excellent. The work, on the other hand, was mind numbing. And for a misfit who really wanted to do nothing more than throw his weight behind a meaningful cause, I got into trouble.

Don’t pity me (I deserved it), because I’m grateful for the discipline that followed; it was a wake up call to get out of Dodge. And I did. Without another job lined up.

It was easily the craziest thing I ever did.

Fortunately I had a soft landing due to some contacts in the business who were able to feed me work right off the bat. But it amounted to a third of my previous salary. I needed more work. So I had to find it. Fast.

That eight-letter word saved my financial life. Because I never would have made it if I had to knock on doors and pick up phones to drum up business. (For one thing, my body would’ve buckled under the stress of regular doses of Wild Turkey and Tums.)

Don’t get me wrong. There is still some courage involved in online marketing.

For instance, you still need the confidence to email people, publish content to a critical world, and send invoices to clients. But the grim prospect of grinding it out on the pavement or phone is gone. In this world you can slowly grow that audience one piece of content at a time.

This is life in the year of the rainmaker.

A six-piece lesson in hustle

It took me about five months to recoup all of my previous salary — and then some. I’d attracted attention through my copywriting blog, fleshed out leads through guest writing opportunities, and reached a point where I carefully selected what jobs I worked on.

But something was queer.

I wasn’t enjoying myself. In fact, about eight months in as a freelancer I decided I did not want to do it for the rest of my life. What I wanted was to put my weight behind a meaningful culture and cause. I wanted to be part of a team.

So for the next 10 months I looked for the right position with the right company.

And that brings me to where I am now: Chief Copywriter at Copyblogger Media. Where I still use my skills as a rainmaker to drive traffic to the site, work the social web, and convert non-believers into believers.

So, what is the lesson in this for you? Hustle is good … but only when it is focused on the right thing.

And how do you find that? Try this:

In case you haven’t noticed, the Internet is about direct sales rather than advertising. And building the audience is the crucial thing.

You can do that with the right kind of hustle. Especially on the Internet, which gives you an unfair advantage built on the age-old principle of attracting and engaging an audience.

What to do next

Want to learn more about becoming a rainmaker? Building a personal media brand? Then subscribe to the Rainmaker podcast. It’s our new (and free) educational resource for 2014, with a “media first” perspective.

And the first podcast is not your usual audio fare. Check it out for yourself (it’s only 22 minutes long), and let us know what you think.

Look forward to hearing from you.

Previous article: How to Write a Magnetic Headline (in Under 15 Minutes)
Next article: Could This Headline Technique Double Your Click-Throughs Too?