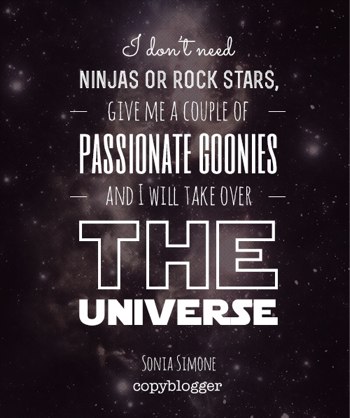 As Beth mentioned yesterday, the Copyblogger team is back from a get-together in Austin during SXSWi.

As you might imagine with this crew, we had a lot of fascinating conversations. One thing that struck me again and again was that even though we have a lot of employees you might call “rock stars,” none of them would in 10,000 years describe themselves that way.

They don’t focus on their impressive lists of accomplishments. They don’t make a point of letting you know how many Twitter followers they have or how many Google+ circles they’re in.

They’re more interested in the ways they haven’t always fit in. They know that a large part of their talent and their gold comes from a passionate dorkiness that defies the “rock star” or “ninja” label.

My artist friend Jamie calls the ninja types (in any endeavor) “lead singers.” They may be talented. They’re certainly confident. They excel at getting the attention and the credit. But they’re not always the real stars.

Our folks are more like The Goonies. As Demian said at one point, we’re “misfits looking for meaningful work.”

Goonies have as much talent as lead singers do, but they tend to have more passion for the work than passion for recognition. They’d rather do something epic than get epic amounts of attention. And they tend to credit and respect others, because they know what it feels like to be ignored and disrespected.

So while there are plenty of rock stars and ninjas out there, some of whom I love, give me my passionate Goonies any day. And for those of you out there who are more Goonie than ninja … more power to you. The way I see it, you’re unstoppable. 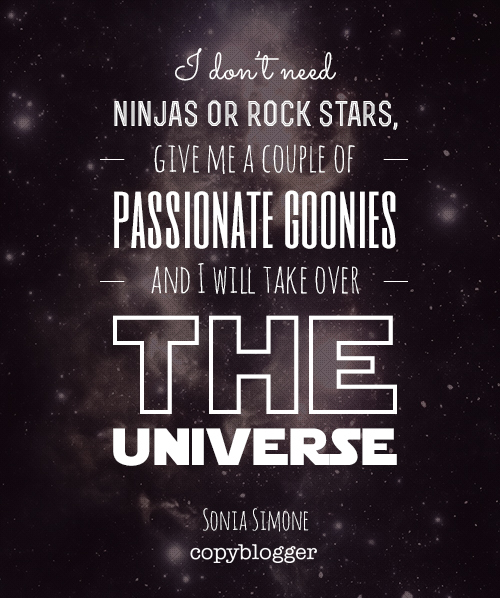 Embed this Copyblogger shareable on your own site …

Copy and paste this code into your blog post or web page:

Previous article: Why Content Marketing is a Long Game (and How to Play It)
Next article: How to Write Interesting Content for a “Boring” Topic