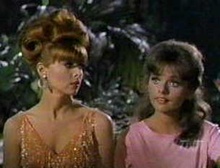 It’s a debate as old as the hills. Who’s hotter, Ginger or Mary Ann?

It’s pretty clear that the Gilligan’s Island creators thought Ginger had it hands down. A redheaded Marilyn Monroe knockoff in sequined gowns and high-heels, Ginger Grant was what used to be called a “starlet,” whose sole reason for existence was her sex appeal.

Mary Ann Summers, on the other hand, was the girl next door. A Kansas cutie in pigtails and cut-offs, she was down to earth, sensible, and could make a comfy hammock out of coconut vines.

Before Lost, Survivor or Castaway, there was the iconic Gilligan’s Island. So, if your blog could be personified as a shapely star of a really cheesy 1960s sitcom, which would it be? Ginger, or Mary Ann?

To quote Jim “Suldog” Sullivan, “This is the question which has plagued adolescent boys, and the men who think like them, since time immemorial (that is, 1964.)”

Ginger was a star

Ginger had a certain dignity. She was a little aloof, she held herself apart as something special. When confronted with being marooned for the rest of her life on a desert island, she never considered compromising her essential identity. She didn’t dabble in things she was no good at, like catching food, cooking or building shelter.

Ginger was a specialist, optimized to perform in a certain environment and not really interested in adapting to anything different. Some would call that strength of character; others, pigheadness.

Does your blog adapt and shift to catch the latest content fads? Or do you stick to your sequins and create a new definition of authority?

Along with the Professor, Mary Ann had a deeply practical bent. When you’re on a desert island, it’s good to know how to do things that are actually useful. Catch fish, build a hut, fend off cannibals who bear a spooky resemblance to retired Borscht-Belt comedians.

If Mary Ann was a blog, she’d give lots of practical, solid advice that her readers would want to file away for reference. She’d be the queen of the numbered list. She’d make Delicious popular once a week without breaking a sweat.

When faced with desolation and probable starvation, anyone can start whipping up the bamboo huts and coconut pies. It takes some creativity and chutzpah to retain your movie star essence in the face of spending the rest of your life talking to the same six mildly retarded stereotypes.

Ginger has a certain Norma Desmond stubbornness, a refusal to let shabby reality get in the way of her self-created legend. She’s still big, it’s the island that got small.

Are you cranking out ordinary content for a me-too blog? Or are you redefining what it means to blog, pushing the envelope, and shaking your sequins when everyone around you is weaving frumpy grass skirts?

Mary Ann looked around and saw what needed to get done. She figured out the needs of her community, pitched in, and helped create what was most relevant to that situation and that audience.

Mary Ann knows how to listen. Her blog content comes from the greater conversation. She’s read The Cluetrain Manifesto so often she can quote long stretches of it from memory. (Lucky for her, since Amazon doesn’t deliver to desert islands.) It would be irritating if it wasn’t so completely heartfelt.

Q: How many bloggers does it take to change a light bulb?
A: Let me know what you think in the comments.

Let’s face it, Ginger is hot

Ginger is champagne and caviar, martinis and cigarettes, Betty Page and the Vargas girl.

Ginger is killer headlines. Ginger is linkbait. Everyone talks about her, everyone wants to know what she’s up to. Ginger can hit the front page of Digg with a long, smoky look and a shift of her hips.

On the other hand, Mary Ann is also hot

Mary Ann is cut-offs and hayrides, apple pie and farm breakfasts, Doris Day and the girl next door. Mary Ann is the girl you marry.

Mary Ann is passionate about her content community. Mary Ann follows 15,839 users on Twitter. Everyone loves her, everyone links to her. Mary Ann has the face that launched a thousand blogrolls.

So which is your blog?

About the Author: Sonia Simone is an Associate Editor of Copyblogger and the founder of Remarkable Communication.

Previous article: 12 Tips for “Psychological Selling”
Next article: The “What Not to Wear” Guide to Breakthrough Blogging