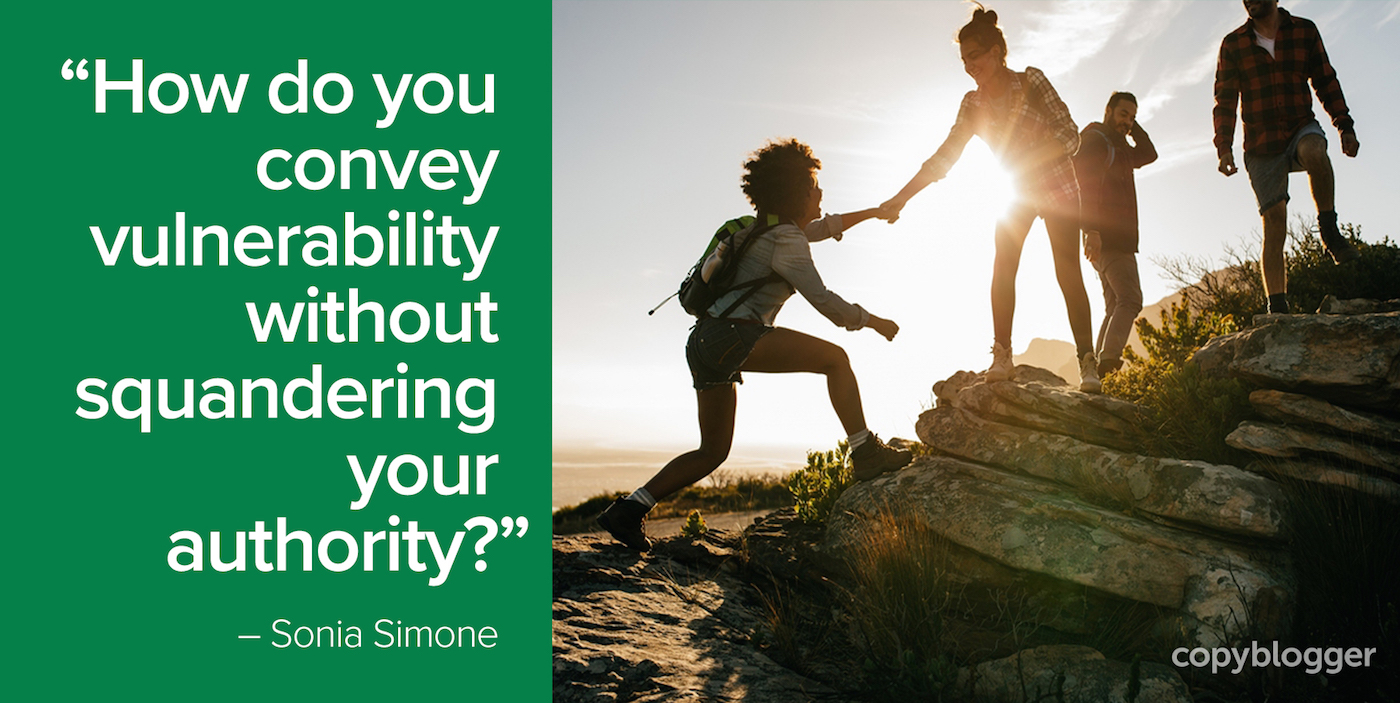 In the beginning was authority.

From the earliest days of advertising, authority was one of the first strategies used to persuade the masses.

Then, a lot of us started using this internet thing to talk to one another. There was some speculation that authority was becoming an outdated concept. But it’s funny how these things work — deep psychological drivers don’t tend to disappear, although they do sometimes change shape.

Still, back on the Cluetrain (and a little before, if you hung out in the right places), we started to talk about something that seemed to be antithetical to authority. The voice of the small, the local, the personal.

A few decades later, bestselling author Brené Brown spoke about the power of vulnerability — and found a massive audience for her ideas.

So which path is wiser? Confident authority? Or “little guy” vulnerability?

Smart writers knew better than to fall for false dichotomies. For skillful writers, the combination of those two — authority and vulnerability — has become the most effective voice on the web.

Copyblogger talks a lot about the importance of a strong writing voice. It’s one of the key things we look for when we’re evaluating applications for our Certified Content Marketer program.

Voice is the element of writing that makes it sound like a someone. It’s natural and conversational. It’s individual. It stands out. (Which is helpful in the ever-rising sea of junk content.)

Good copywriters and content marketers can handle multiple tones of voice. They can write more formally when it’s called for, without seeming stiff or stilted. They can write informally without devolving into triviality or unicorn vomit.

One of the most important voices to master right now is what I call empowered vulnerability. I’ll refrain from coining a hideous neologism to describe this (you’re welcome). I do like my colleague Jerod Morris’s similar concept, though — the non-hideous primility.

Empowered vulnerability doesn’t shy away from authority. It understands that people will always look for informed, confident voices.

But it also doesn’t shy away from revealing the personal, the fractured, and the imperfect.

A (newish) book on power and influence

On a flight to a conference last week, I read Dacher Keltner’s fascinating 2016 book The Power Paradox: How We Gain and Lose Influence. It describes some of the behavioral changes we can observe between the powerful and the powerless.

“The capacity to alter the state of others”

His view of power is pretty well summed up by my longtime favorite cheesy (but good) success quote:

“You can have everything in life you want, if you will just help other people get what they want.”
– Zig Ziglar

Powerful people project confidence and authority; we all know that. And that often leads to more power. But it can come at a cost.

When people gain power, their social intelligence can begin to suffer. Keltner cites studies showing that those who attain power (even meaningless temporary power, like the kind you give grad students participating in psych experiments) can become prone to an increase in reckless behavior, a decrease in natural empathy, and, weirdly, increased rudeness such as worse table manners.

On the other side, any of us can observe that being powerless comes with a lot of disadvantages. It’s a significant cause of clinical depression, it takes a grave toll on health and life expectancy, and it can make it difficult to think strategically.

But Keltner makes a fascinating case: that one of the great potential gifts of powerlessness is empathy. (I highly recommend you pick up the book to get all the details — it’s a great read.)

Now, choosing to be powerless would probably be taking things too far. But choosing to accept and nurture our vulnerability — that’s a sweet spot.

Powerlessness is a static pain state. Vulnerability is acknowledging and working with the pain we all have, making it part of a journey to something healthier.

Empowered vulnerability is the conscious choice to embrace the best of both states, power and vulnerability. We all have both powerful moments and vulnerable moments. We can tap them both to become better people and better writers.

And the combination creates a blazingly potent voice that works beautifully in the content environment today.

Getting the balance of these two right is what separates gifted writers from hacks.

A lot of less-experienced writers try to accomplish this pairing by dribbling casual language, internet slang, and dopey jokes around their content. Sometimes they overshare to the point of raising serious doubts about their competence.

Or, maybe worse, they humble-brag and expect to be praised for their humility.

A strong writer will choose a confident stance when giving advice that helps the audience — then temper that with a more modest approach when talking about the business or organization.

In other words, they’re confident when they’re giving advice to their audience, and vulnerable when they’re talking about themselves.

Vulnerability isn’t wimpiness. It doesn’t mean that you hold back when you have something important to say.

And confidence isn’t arrogance. It doesn’t mean that you have to go on and on about every accomplishment, even the ones you worked hard for.

The audience is (as usual) your compass. Choose the side of the empowered vulnerability coin that will benefit them in that moment.

Sometimes we worry that showing our imperfections or difficulties will undermine our authority.

But vulnerability can be a source of authority.

An empathy-deficient powerful voice suggests, “I always knew how to do this. I’m going to show you solutions that work for people who are naturally good at it.”

An empowered, vulnerable voice says, “I didn’t always know how to do this. It took a lot of time, effort, and support to figure it out. I’m going to show you solutions that can help you, even if you don’t think you can do it, either.”

Both voices are describing a solution. The solution itself might be equally valuable. (They might well be the exact same solution.)

But the vulnerable description creates a bond of empathy with the potential customer. The shared difficult experiences are a bridge — not only between the expert and the audience, but also between the audience and the solution.

Real authority doesn’t come from perfection or hyped-up confidence. It comes from your ability to help.

And that ability to help often comes from the mistakes, difficulties, and trials that you (or the organization you’re writing for) have faced and conquered.

There are all kinds of ways to introduce vulnerability into your writing voice.

Humor: Ann Handley’s writing and speaking are always marked by a delightful self-deprecating sense of humor. The more she teases herself, the more credibility and confidence she shows. She also beautifully demonstrates how to deliver beneficial advice with confidence.

Traumatic past: Lewis Howes — seemingly a poster child for effortless confidence, shared his personal story of abuse and survival — and revealed a power that came from a much deeper level.

Humility: Darren Rowse readily shares the stories, often very funny, that demonstrate his humble beginnings. We get the sense that he started from the same place we do — “If he can do it, I bet I can, too.”

Experimentation: Vulnerability isn’t always strictly about personal difficulty. Joanna Wiebe creates lots of great content around copywriting experiments she’s done — testing out potential mistakes so that her audience doesn’t have to. It’s much more persuasive than just telling her audience the best copy techniques to use.

An unexpected side benefit

One benefit to embracing vulnerability (the empowered kind) in your content strategy?

You can avoid one of the most dangerous poisons of power — what Keltner calls “stories of exceptionalism.”

The word I often use is entitlement.

Been hearing those recent stories about how brands might lose their access to free organic reach on Facebook? (You can swap out Google, LinkedIn, or any other giant platform.)

These stories rest on an assumption that brands have some kind of innate right to public attention.

It has nothing to do with whether or not it’s “right” for Facebook to do. Facebook makes decisions in its own business interests.

Or maybe it doesn’t. You don’t have the ability to make Facebook smarter.

If Facebook doesn’t think your business page is improving its bottom line, it’s going to make changes. And if you don’t like it, as Guy Kawasaki says, you can let them know where to send that refund check for free.

I get that it’s annoying. It’s irritating, and sometimes dangerous, to put a lot of work into something that flips around on us. But the outrage comes from the notion that we’re owed something by Facebook. We aren’t.

Success can have a nasty way of making us think that we’re somehow owed more success. And that one will bite us in the ass every time.