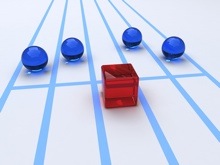 One can compare competing offers ‘til the heart’s content, all with simple clicks of a mouse.

Well, it’s not that great if you happen to sell online.

And what if I told you it’s not really that great for consumers, either?

Preface: Start with a killer product or service

This should go without saying in our age of global competition and reduced barriers to entry. But so often merchants are looking for a magic bullet to widely distribute something that the market simply finds inferior.

The problem is, there are plenty of people out there with exceptional products and services who are losing out to others with lesser offerings and higher prices.

What’s going on with that?

Superior marketing and sales techniques, that’s what. Here are 3 ways to level the playing field (or even tip the scales in your favor).

Wouldn’t selling online be wonderful without competition? Well, it’s possible, if only to the extent that a certain type of person considers you the absolute only option. Yes, it’s our friend positioning again, and we’ll keep talking about it because it’s so vital to success.

The traditional approach to positioning involves offering a benefit your competition cannot or will not offer, thereby making your offer the only choice for those who value that benefit. It still works too – look at the insane level of customer service that Zappos offers, and you’ll understand why throngs of people wouldn’t dream of buying shoes elsewhere.

For small and micro-businesses, positioning (a/k/a your unique selling proposition) can be as simple as creating a unique bond with enough people to build a thriving business. Whether by creating a hybrid business at the intersection of disciplines, crafting a better metaphor that communicates what people need to hear, or creating an emotional bond and huge trust based on your own personality, modern online positioning has come down to connections that resonate authentically and generate loyalty.

Remember, it’s not about where you rank in a hierarchy against others. It’s about carving out your unique territory and owning it outright.

Let’s face it, in some markets, positioning alone might not get it done. When you’re selling retail items such as consumer electronics or commodity goods, shoppers are more focused on overall value for the buck.

The most common merchant response to the threat of online comparison shopping is not very effective. “Hey, let’s pretend they’re not there!” is nice as wishful thinking, but let’s be realistic.

You’ll hear time and again that the initial objectives of copy in a call-to-action environment is to 1) attract attention; 2) express benefits; and 3) overcome objections. The fact that your prospect thinks you have legitimate competition is really just an objection to buying from you right now.

Instead of sticking your head in the ground, why not proactively address why your offer is better than the other guy’s? Don’t assume that your prospect “gets” that your offer is superior; “show” her it’s better by doing a head-to-head comparison with charts, checklists, or even an interactive apples-to-apples demonstration.

People examining your offer want you to be the solution to their desire or problem. It’s your job to eliminate the lingering doubt that exists in the form of objections, and like it or not, your competition is one of those objections.

We tell you over and over (and over) to focus first on benefits rather than features, because people decide to buy based on lightening-fast emotional responses, and justify that decision with logic. But what if it turned out that making purchase decisions via emotion (instead of by overly-rational research and price shopping) actually made us happier?

Those who used primarily emotion rather than primarily logic made more consistent choices. And consistency is one of the hallmarks of a “rational actor.” In other words, the “emotional” people made more “rational” choices than those who focused on rationality!

What does that mean? From the study:

For the consumers, contrary to lay perceptions, attending to one’s emotional responses may prove to be very valuable in understanding one’s preferences. It is possible consumers would be much happier with choices based more on their emotional reaction. For example, if one buys a house and relies on very cognitive attributes such as resale value, one may not be as happy actually living in it, as opposed to a person who attends to his or her emotional reaction to the house prior to purchasing it.

Jonah Lehrer, author of How We Decide, thinks that online price shopping might actually make us unhappy. He notes that the study speculates that the Internet leads consumers to engage in more rational deliberation, which in turn produces an outcome that contradicts our assumptions about the “online shopping paradise.”

Remember, when introduced to an emotional benefit in an offer, neurology shows that our brains react as if we were already experiencing the actual benefit. In essence, employing emotional benefits not only begins the customer satisfaction experience before the sale, this latest research indicates that initial satisfaction maintains after the sale.

Isn’t bonding with prospects and customers better for everyone?

It’s amazing how many of the initial assumptions sparked by the Internet continue to be dead wrong. E-commerce was supposed to benefit the consumer by providing limitless options, and yet the counterintuitive paradox of choice shows that too many options make us anxious and unhappy.

Instead, we now have an entire movement devoted to voluntary simple living. We don’t necessarily want more choice; we want something that does what we need it to do when we desire a solution.

In an ultra-competitive environment, a quality product or service is an indisputable market obligation (and I’d say an ethical obligation as well). But given how we actually operate as human beings in the face of overwhelming choice, isn’t a communication approach that bonds emotionally with our prospective customers also a market obligation? Perhaps even an ethical one?

What do you think? Let me know in the comments.

Previous article: Why Writer’s Block is Your Secret Weapon
Next article: The 3 Fatal Diseases that Kill Good Blogs