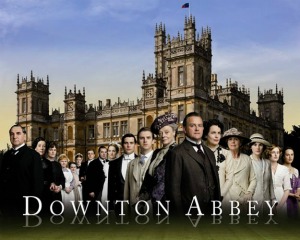 Every content marketer needs to build relationships with readers.

To have a chance at achieving your marketing goals, you need readers who love what you do.

What if there were a blueprint for telling irresistible stories, for making almost everything you write have an impact in the hearts and minds of your readers?

Look no further than Downton Abbey for that blueprint.

What can a once-obscure period television drama teach us about effective writing, content marketing, and engagement online?

Turns out, just about everything …

What is Downton Abbey?

The British television mini-series is a true phenomenon, captivating millions of ravenous viewers around the world.

In only its second season, Downton (as its fans call it) has earned 32 award nominations (with 12 wins), including six Emmy Awards most notably for “Outstanding Mini-Series or Movie Made for Television” and “Outstanding Writing for a Mini-Series.”

Recently, it was honored with four Golden Globe nominations and won “Best Mini-Series or Movie Made for Television.”

The USA Today recently published a glowing feature of Downton beneath the headline, “Loyal U.S. subjects return to PBS’ Downton Abbey,” in which they report “Season 1 attracted 5 million [US] viewers to each new episode.”

Not bad numbers for a show with no car chases, no bathroom humor, and no Kardashians.

The New York Times is hooked too, stating recently “The British melodrama Downton Abbey is already the darling of American public television.”

What’s happening here? How did Downton Abbey — a British period drama about the lives of lords, ladies, housemaids, footmen, and valets — become the darling of so many hearts and minds so quickly?

That’s putting it mildly. The storytelling is obsessively enchanting.

As copywriters, authors, editors, and other writerly kin, we’d be foolish not to pay attention to Downton’s phenomenal success. After all, winning hearts and minds is what we’re all after, and Downton can be our guide.

All good stories start with great characters. In Downton Abbey, there are more than 25 of them. The dowager countess, played by a scene-stealing Maggie Smith, even has a Facebook page.

The adoring Downton fan base is in love with these characters for precisely the same reasons why readers come to love literary fiction characters, non-fiction writers, bloggers, and thought leaders.

Downton actress Siobhan Finneran (Ms. O’Brien) reveals the secret: there’s “a character for everybody” and in those characters “you recognize something you know very well.”

This is what’s meant by identifying with a character, fictional or not.

These characters face similar surprises as the show’s viewers do in their own lives, and are grieved with the same regrets. They have hopes and dreams that fade to ash, but they continue to fight. Just like us.

Ultimately, the good characters — those that are identifiable, memorable and special to us — are real to us in powerful ways. They’re strong, either in good ways or bad. And we like or dislike them enough to follow their journeys to the end.

When you’re telling the story of your latest product or writing your next post, make sure your characters are vivid, bold and easily identifiable. You are a primary character. Your reader or customer is another.

Tell your audience’s story and people will always want to hear more.

Downton Abbey’s first episode begins with the sinking of the RMS Titanic.

Including the Titanic in the storyline was genius for two reasons:

Lord Grantham of Downton Abbey has no sons, so the heir to his title and considerable estate is his cousin James. The first episode’s opening scenes reveal that James and his son Patrick (the latter conveniently engaged to Grantham’s eldest daughter, Lady Mary) have both died on the Titanic.

The sudden disappearance of the “heir and a spare” cuts Mary off from her family’s inheritance, and puts Downton into the hands of a distant third cousin no one has met.

That is how you start off an irresistible story.

It’s crackling with emotion — epic in context and acute in feeling. We can’t help but wince when the hopes and plans of an entire family are shattered to pieces.

Naturally, other high stakes drama erupts around them: scandals, deaths. And the outbreak of World World I, a global fight of good versus evil, altering the social fabric and flow of life forever.

Could there be higher stakes than that?

As Rebecca Eaton puts it, Downton is an irresistible story because there are “good people at the heart of it, evil people at the side of it, and lots to lose for everybody.”

It doesn’t matter what you’re writing — the stakes have to be high enough to keep your reader’s attention. They need to allow themselves to become emotionally involved with the story and characters. (Even if those “characters” are real people, like you and your customers.)

Give them high stakes — always, of course, in honest terms.

This balance between high drama and realism is key, and Downton handles it beautifully. The characters are fictitious, but the high stakes are historically accurate. Writer Julian Fellowes even admitted that the sordid scandal from the first season was borrowed from a true historical coverup from the period.

Each episode ends on a cliffhanger. Every character’s vulnerabilities are slowly revealed. Social tensions are rife all throughout the British aristocratic way of life — and those tensions change and evolve in wake of WWI. And the witty dialogue delivers smart social politicking.

Lead actress Elizabeth McGovern (Cora, Countess of Grantham) explains this ‘automatic drama’ nature this way: “people are thrown together in a situation and they have to bounce off one another, which [naturally] creates stories.”

Smart writers do this in their copy and narratives. They set characters, benefits, events, and arguments into a specific context and allow those elements to drive the storytelling. This makes for genuine tensions and high anticipation, with little effort.

Are you writing an important sales letter? What truism can you seat beside one of your benefits to bolster its resonance?

Drafting a gripping article headline? What opposing elements can you pair to create a compelling contrast?

Writing a romantic scene? What conflicting social norm can you inject to make the budding romance more tantalizing?

Irresistibility lies at the intersections of these elements. Automatic drama is at its finest when the elements are in intimate proximity and of opposing qualities.

4. Situate everything on the edge of change

Downton Abbey is rooted in the legendary British aristocracy of the early 20th century.

This remains one of the most drastic periods of social change in history, marked largely by World War I. It was, thanks to WWI, a time of violent conflict, great uncertainty, and everyday anxieties.

The realities of the time led the world to the edge of change from which there was no turning back. This is what we experience with Downton Abbey: lives at the cusp of new beginnings; urges to be more and do more; discoveries of what happens when you must go forward into a different world.

This is the atmosphere that every good drama needs.

Skilled copywriters create similar atmospheres in their own writing. Their product offering describes the shortcomings of traditional tools and why a switch to theirs is in the reader’s best interests. Or, their private newsletter reveals their personal struggles with change and the successful strategies they used to overcome them.

Dan Stevens describes this ‘Downton Effect’ as “waking up to new possibilities of what life could be but haven’t quite got the equipment to bring it about.”

That’s what all good products, services or other solutions in any market do; they present new possibilities in stark contrast to pre-existing options. And while individual results will vary, these new offerings present a strong case for a better future through the embrace of change.

5. Win hearts and minds with realism

With Downton, there is “a truth to the way people behave,” adds Elizabeth McGovern.

If your copy, narrative or other work honors the above ideas of …

… then you’ll likely achieve this effect.

This realism is a powerful force because stories that entertain and convey truth compel readers to take action.

This is Downton Abbey’s ultimate secret to irresistible storytelling. It’s about more than identifiable people. It’s about what happens when identifiable people collide in a believable way. The conflicts and outcomes of those stories are what drive the narrative of Downton. And it’s the very thing that can, if genuine, win the love and loyalty of your readers.

Tell your story — or your product’s story, or your customer’s story — in a vivid and human way. The closer you write to the tenor of your reader’s feelings and the zeitgeist of the times, the stronger the bond will be.

As Downton’s writer Julian Fellowes says, “allowing characters to speak in their own voice is the trick of screenwriting.” I dare say it’s the linchpin to irresistible storytelling.

US readers can tune into PBS this Sunday at 9PM EST for the next episode, and get ready to be charmed by one of the best modern examples of storytelling anywhere.

Special thanks to PBS for their treasure-trove of behind-the-scenes interviews with the cast and producers.

Or, if you’ve already been glued to this amazing show, tell us in the comments how its masterful storytelling has informed your own copywriting, content creation, and online marketing …

Previous article: 7 Sharp Writing and Marketing Links
Next article: 22 Ways to Create Compelling Content When You Don’t Have a Clue [Infographic]