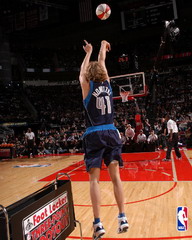 Why would a 7-foot-tall forward in the NBA bother taking shots from way back behind the three point line?

Because he makes them.

That’s quite remarkable, given that fellow 7-footer Shaquille O’Neal can barely make a free throw.

Big guys aren’t supposed to hit 3 pointers. A big guy’s job is to dominate in the paint, and effortlessly slam dunk and tip in baskets while the little guys take their chances from downtown.

Dirk Nowitzki of the Dallas Mavericks does both.

This year, Nowitzki won the 3-point shooting contest at the All Sar game. He also passed up former teammate Steve Nash for the most consecutive free throws by a Maverick with 60.

And yet he still slam dunks with the best of ’em.

This 5-time All Star has plenty of other impressive stats and achievments for you to mull over. But when it comes to being chosen as the NBA’s Most Valuable Player, individual achievement is not what matters.

The MVP is awarded to the player that provides the most overall benefit to his team.

Dirk’s remarkable benefit to the Mavericks is that he is a devastatingly versatile scorer, while still making a strong defensive contribution. When Dirk’s on the court, the Mavericks simply score more points and win more games, and this is a team with a serious shot at becoming this year’s NBA Champions.

So why is the word on the street that Steve Nash will take the MVP award for a second straight year, even though his Phoenix Suns risk first round playoff elimination?

Dirk Nowitzki has a marketing problem. His remarkable story is not being told in a way that resonates with the Associated Press sports writers who select the league MVP.

Here’s three things you can learn from Dirk’s dilemma:

No matter how remarkable your offering, you can’t count on the story to tell itself. It’s up to you.