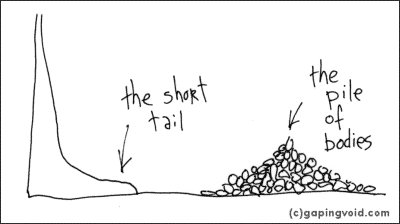 Welp, it’s time once again to log out of WordPress and turn out the lights.

Once again, blogging is dead.

Seems at least once a year, a flurry of discussion erupts around the imminent demise of blogging. And then the rest of us shrug our shoulders, grab some coffee, and get back to creating content that further solidifies our web presence.

Don’t get me wrong… as always, change is definitely happening. But it doesn’t mean blogging is dead this time around anymore than it has every other time this discussion pops up.

Reports of Blogging’s Death Have Been Greatly Exaggerated

Like the last time I addressed this topic, the basic argument is that the rapid growth of Facebook and Twitter has dampened the urge to blog. Since social networking is much easier than creating long-form content, why bother blogging?

Chris Brogan delivered the immediate logical response—that while snack-sized social networking content has its place, from a marketing standpoint it only works in conjunction with longer, more thoughtful content. And while blogging veteran Steve Rubel worries about long-form content in a short-attention-span world, he’ll continue to blog—because he knows he has valuable ideas to share that don’t fit in 140 characters.

The impact of Facebook and Twitter is a powerful trend that shouldn’t be dismissed (in fact, content creators should be using at least one of them). But the story remains the same: people who mainly want to socialize, share links, and post pictures of their cat should be using social networks instead of blogging, and that’s exactly what’s happening.

Those of us with different aspirations continue to blog, and smartly use social networking sites to promote our content while adding value in those venues. Whether you’re trying to build an online business, market your stuff, or promote a cause, those who seek maximum influence know that creating valuable longer content is the way to go.

Charles Arthur of the Guardian pins this donkey of a discussion on the tail:

People are still reading blogs, and other content. But for the creation of amateur content, their heyday for the wider population has, I think, already passed. The short head of blogging thrives. Its long tail, though, has lapsed into desuetude.

So, are you in the short head (or “short tail”) of blogging?

What’s the Short Tail of Blogging?

When people think of the “short tail” of blogs, they generally think of the large blogs that reside in the Technorati Top 100. The blogs that are really new media versions of traditional publications, but have a lot of unique social media characteristics that set them apart from mainstream media (at least for now).

I think that definition of the short tail is short sighted.

Big blogs that rely on a CPM advertising model are naturally prominent, because they have to attract massive amounts of traffic to make any real money. But there are plenty of business-oriented blogs that drive significant revenue without massive traffic, because they use content to attract prospects and convert them into new customers. Software, training, freelance services, real estate, wine, art and more are sold thanks to the power of attraction, trust, and conversion that blogs possess (when done well).

Those who recognize the decline in casual blogging also admit the power serious blogging retains:

It’s also essential to remember that unlike the transient nature of Twitter and the great walled garden of Facebook, blog posts are effectively conversations that are eternally visible through Google, meaning they have more inherent value to brands.

In the broadest sense, a “brand” is anyone with a message with a point beyond what you’re having for lunch. If that sounds like you, better stick with the blogging.

Even if you never call it that.

Here at Copyblogger, we’ve been teaching the intersection of content and copywriting for three-and-a-half years. We started well before the term content marketing came into vogue, and yet content has been the driving force behind online marketing since the inception of the web.

Content marketing is really what this is all about. Blogging (in the sense of the software and the best practices that help content spread and community grow) is simply the centerpiece of the effective and efficient practice of online content marketing.

Previous article: Why Preaching to the Choir is a Good Thing
Next article: The Future of Copyblogger