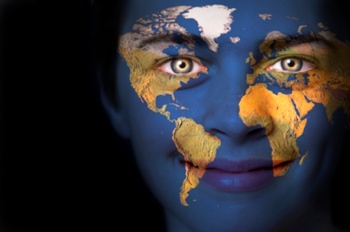 I have a vivid memory of using the word “idiosyncrasy” in fifth grade during a group project. I didn’t know the definition, just the word. This enraged a boy named Chance to the point where he spit on me and encouraged everyone else to do so. We all fought on the floor until the teacher pulled us apart.

I don’t blame the little ruffian, even though his favorite game was putting a bucket on his head and charging the wall. It was my fault. I’m a librarian and have always been one at heart. My parents pushed learning, curiosity, and books and that was the boy they created.

I failed to speak the dialect of my peers, and took my knocks for it. And on your blog, not speaking the right dialect can cost you relationships and readers.

What is a dialect?

Oh, man. This eventually leads to:

If something sucks, just say it sucks

The late, great David Foster Wallace wrote a wonderful essay about grammar wars (they do exist) in his book Consider the Lobster.

He suggests that the kids who know the big words on the playground are future social misfits. If what we might call “book talk” is your only dialect, you run the risk of alienating anyone who doesn’t communicate in that way. The more dialects you know, the more people you can make a connection with.

Wallace describes a boy striking out during a little league T-Ball game. Which of the following scenarios will serve him best with his peer group?

Most kids on the bench will identify more with the kid who shouts, “That sucks!”

Why write anything in a style that creates distance with your readers?

If you’ve ever read Copyblogger before, you know any commandments and buzzwords of traffic building that I could quote you.

Why do you do any of these things? So readers won’t leave you. So they might even feel like coming back again tomorrow.

When you speak your readers’ language, you solidify the relationship. And that lets you use all the other copywriting techniques in the most productive way possible.

How do you learn the dialect of your readers?

Unless your blog has been a colossal failure, you probably already know the lingo readers want from you.

Look at your progress so far. It will show you how well you’ve been getting your message across.

What do readers want from you? What problems do you solve? Why are they reading your blog?

These questions should be in your head from day one.

If readers return often and your links grow steadily, you’re fine. Your relationships are solid and your language is appropriate to your goals.

But watch for warning signs. Beware of plummeting stats or emails that say: “Attention! I’ve noticed that you’re behaving like an imbecile and I hate you.”

When in doubt, keep it simple

Here are some guidelines for writing that builds better relationships.

If you take nothing else from this

If I could say one thing today and make it stick, it would be this:

Don’t fall in love with your own cleverness, smarts, or talent. Let your readers and results reward your efforts. Forget what you think you know about yourself for a while.

Be humble and have fun. Remember, you’re here to help, not impress. After all, parroting a few big words didn’t make wiping that spit off my face any fun back in the fifth grade.

And in case you’re wondering…

I won that fight. Big time.

About the Author: Josh Hanagarne writes World’s Strongest Librarian, a blog with advice about coping with Tourette’s Syndrome, book recommendations, buying pants when you’re 6’8”, old-time strongman training, and so much more. Please subscribe to Josh’s Stronger, Smarter, Better Newsletter to stay in touch.

Josh Hanagarne is a writer, speaker, librarian, and the author of The World's Strongest Librarian: A Memoir of Tourette's, Strength, Faith, and the Power of Family, which recently received a rave review from The New Yorker. He works on level 3 of the Salt Lake City Public Library, loves his job, and doesn't plan on leaving.

Previous article: Is Writing Obsolete?
Next article: Confessions of a Comment Addict