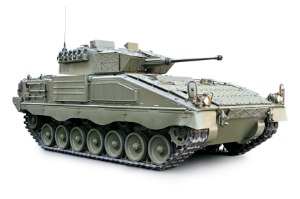 You might not think that DARPA (the U.S. Defense Advanced Research Projects Agency) would be very concerned about writing copy.

These are the folks who helped invent computer networking, Predator drones, and Iron Man-like military exoskeletons.

But in fact, DARPA is investing in one particular kind of wordsmithing: stories.

Why is storytelling, one of the oldest human activities, of such interest to DARPA, an agency dealing in technology so advanced that it often sounds like science fiction?

That stories have remained a part of human behavior for so long is exactly what interests DARPA. One of their project descriptions recently led to a request for proposal that says,

Narratives exert a powerful influence on human thoughts and behavior. They consolidate memory, shape emotions, cue heuristics and biases in judgment, influence in-group/out-group distinctions, and may affect the fundamental contents of personal identity.

In my new book Brainfluence: 100 Ways to Persuade and Convince Consumers with Neuromarketing, I describe how stories wield an amazing power on human attention.

Scientists believe that we are hard-wired to pay attention to stories. In our hunter-gatherer days, we gained a huge evolutionary advantage when we developed the ability to communicate information with descriptive stories.

Most animals rely on experience or direct observation to learn; a mother bear can’t tell her cub not to eat the red berries if he goes into the meadow. But humans can give each other detailed narratives about food, danger, and opportunities. It’s not surprising that evolution favored those who could effectively use this form of communication.

Stories engage our brains. One experiment found that stories that described vivid action lit up the same areas of a reader’s brain as those in a person performing that action. (See Your Brain on Stories.)

In other words, read about a carpenter pounding a nail and your brain will light up as if you were actually swinging a hammer.

Another experiment used spoken stories. The scientists monitored the brain activity of both a person telling a story and an attentive listener. To their surprise, they found that the two brains began to synchronize, with the listener’s activity mirroring that of the storyteller.

All this research tells us what persuasive writers have long known. If you want to connect with your audience, whether your copy will be read or listened to, you should incorporate a story.

Instead of providing a list of facts and statistics showing how much money your product can save, tell the first-hand story of a customer who used your product to save money and get promoted.

What makes a good marketing story?

You’ve got a limited amount of both space and reader attention to work with, so you have to accomplish a lot in a few words. A novelist can take many pages to establish a character, but you have to do it in a few words. You can’t spend a lot of time setting up a situation or conflict, either.

Here’s are some ways to get around those limitations:

Stories have a deep emotional impact and can actually change our thinking.

If DARPA, sometimes described as “100 geniuses connected by a travel agent,” wants to use stories to change opinions and behaviors, shouldn’t marketers consider tapping into their power, too?

Roger Dooley is the author of Brainfluence (Wiley) and an international keynote speaker. Find Roger and his content at rogerdooley.com. On Twitter, he is @rogerdooley.

Previous article: The 2011 Copyblogger Gratitude List
Next article: How to Build an Engaged Audience with Content Marketing