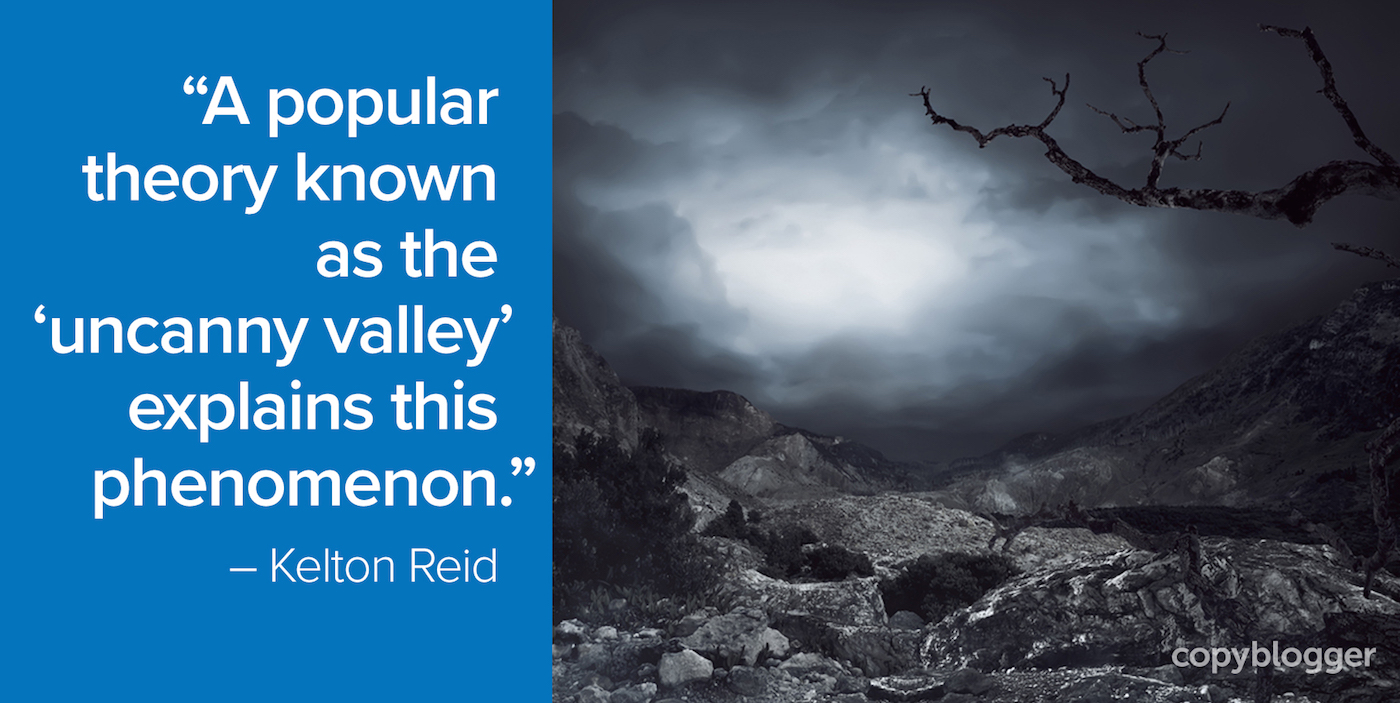 Ready Player One has been called pure “nostalgic nerd-bait” by film critics, but that’s not the only reason it earned $300 million worldwide in just its first week.

From the high-energy title sequence to the quintessential Spielbergian finale, it’s a sometimes formulaic, self-referential film that strays quite a bit from the book it’s based on, but one that nonetheless fulfills its promise to audiences.

Why a famous movie director desperately needed a winner (no spoilers)

For Spielberg, the New Hollywood godfather and one of the most successful directors of all time (see: Jaws, E.T., Raiders of the Lost Ark, Jurassic Park, and A.I. Artificial Intelligence, to name only a few), the film’s early success was a huge relief.

The director used some of the most ambitious CG visual effects ever to adapt Ernest Cline’s popular dystopian sci-fi novel into a 140-minute, popcorn-inhaling, VR pop-culture mashup, and it’s already proven to be his highest grossing film in 10 years.

And he’s clearly learned some important lessons about wielding the powers of new technology and selling tickets.

Because past failures sting

Ready Player One (RPO) is a return to form for Spielberg, and his first big budget, action-fantasy film since The Adventures of Tintin in 2011.

Did you forget about ‘The Adventures of Tintin’ too? Many of us did, and probably for a good reason.

That movie was a box office disappointment that collected less than $23 million in its debut. Not a great showing for a collaboration with The Lord of the Rings director, Peter Jackson, that cost upwards of $140 million to make.

Critics and audiences alike were just plain creeped out by the adaptation of the beloved Tintin comics. But why?

Don’t fall into the “uncanny valley”

It seemed a sure thing for Spielberg. The popular and long-running 1930s Belgian comic is one of the most popular of all time.

“By 2007 … Tintin had been published in more than 70 languages with sales of more than 200 million copies, and had been adapted for radio, television, theatre, and film.” – Wikipedia

The glaring flaw of the film was its use of, at that time, bleeding edge 3D digital visual effects that incorporated live action motion capture, not dissimilar from those used in RPO.

Spielberg executed his filmmaking skills well enough, but something was lost in the translation of the near-photo-realistic faces and the eyes of the characters.

Via The Hollywood Reporter

The characters in Tintin looked human — but not in a good way.

There is a popular theory that explains this very phenomenon known as the “uncanny valley,” proposed in 1970 by Japanese robotics professor Masahiro Mori. 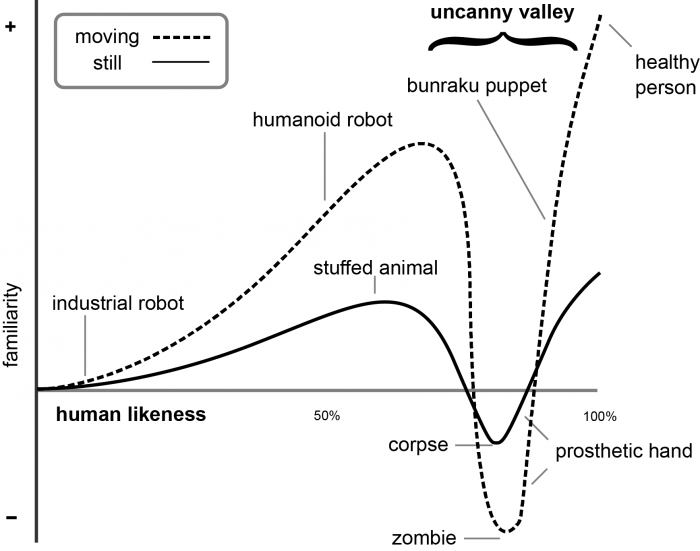 By Smurrayinchester or CC-BY-SA-3.0, via Wikimedia Commons

“… the closer an artificial character or mannequin comes to resembling a human face without actually pulling it off, the more unsettling its presence will become.” – Daniel D. Snyder, “‘Tintin’ and the Curious Case of the Dead Eyes”

Audiences love humanoid droids like C-3PO, the characters from Frozen, or anthropomorphic movies like Sing, because they are exaggerated and “human-like,” but not so much so that they creep us out.

It’s an evolutionary sniff-test programmed into our brains to recognize when people don’t look or sound quite right.

Think: Prehistoric survival instinct designed to keep us one step ahead of the zombies.

Even today, filmmakers and animation experts have trouble portraying human movements and qualities that are almost indiscernible to the human eye, but not to the brain:

(Great podcast episode from Imaginary Worlds where you can learn more: “Stuck in the Uncanny Valley“)

So why did Ready Player One connect with audiences where Tintin failed?

Much of RPO takes place in the real world between actual humans with real problems. The technology and VFX are used the way they should be — to aid the story — and they’re distinctly framed in a way that doesn’t make them repulsive.

Spielberg also leans heavily on the classic storytelling formula of the hero’s journey — a trick he learned from pal, Star Wars director, George Lucas — that makes the movie feel both familiar and new.

There’s an even simpler theory proposed in the ’40s by a French-born American industrial designer, Raymond Loewy, that can help explain why some films and products fail and others win over audiences.

Loewy’s work included some iconic brands you might recognize: “the Shell, Exxon, TWA and the former BP logos, the Greyhound Scenicruiser bus, Coca-Cola vending machines, the Lucky Strike package,” and many others.

“Loewy … believed that consumers are torn between two opposing forces: neophilia, a curiosity about new things; and neophobia, a fear of anything too new. As a result, they gravitate to products that are bold, but instantly comprehensible. Loewy called his grand theory ‘Most Advanced Yet Acceptable’ — MAYA.

His theory has been confirmed as a bedrock psychological phenomenon known as mere-exposure effect, or the familiarity principle:

“In studies of interpersonal attraction, the more often a person is seen by someone, the more pleasing and likeable that person appears to be.”

As a rule, we all crave familiarity, but when we become inevitably bored, we seek out novelty in an almost endless cycle that keeps us close to what we love but constantly seeking the new.

Brand loyalty keeps us buying the same familiar products over and over, just in slightly different iterations or shiny repackaging.

Big budget movies that miss with audiences are simply product launches marketed to consumers that don’t follow the theory of MAYA. They fall into an uncanny valley outside of the audience’s comfort zone.

Why you need an audience-first mentality

There is an entire museum in Ann Arbor, Michigan nicknamed the Museum of Failed Products that journalist Oliver Burkeman describes as “… the only place on the planet where you’ll find Clairol’s A Touch of Yogurt shampoo alongside Gillette’s equally unpopular For Oily Hair Only, a few feet from a now-empty bottle of Pepsi AM Breakfast Cola (born 1989; died 1990).”

Clearly those marketers didn’t do their research. They created products and content that fell into an uncanny valley that actually prevented them from connecting with consumers.

They repulsed — instead of intrigued — their intended audiences.

Without a deeper understanding of the needs, hopes, desires, and dreams of your audience, you’re doomed to turn them away. They also need to know, like, and trust you first, to build that familiarity.

With so many distractions in our modern lives — and especially on the internet — it’s easier than ever for potential audiences to get creeped out, click away, and quickly put their credit cards back in their wallets.

“So, all of this easy-to-produce, repetitive information exists on the internet, but the content doesn’t connect with anyone … potential audience members move on and the content creators are left thinking content marketing doesn’t work.” – Stefanie Flaxman

I challenge you right now to scan your social media feeds and not quickly spot at least one soulless piece of content.

We talk a lot about the overlap of the buyer’s journey and the hero’s journey here at Copyblogger because both are tried-and-true methods for getting the audience to stick around.

“Sexism Is Over, Steven Spielberg Says the Next Indiana Jones Could Be a Woman”