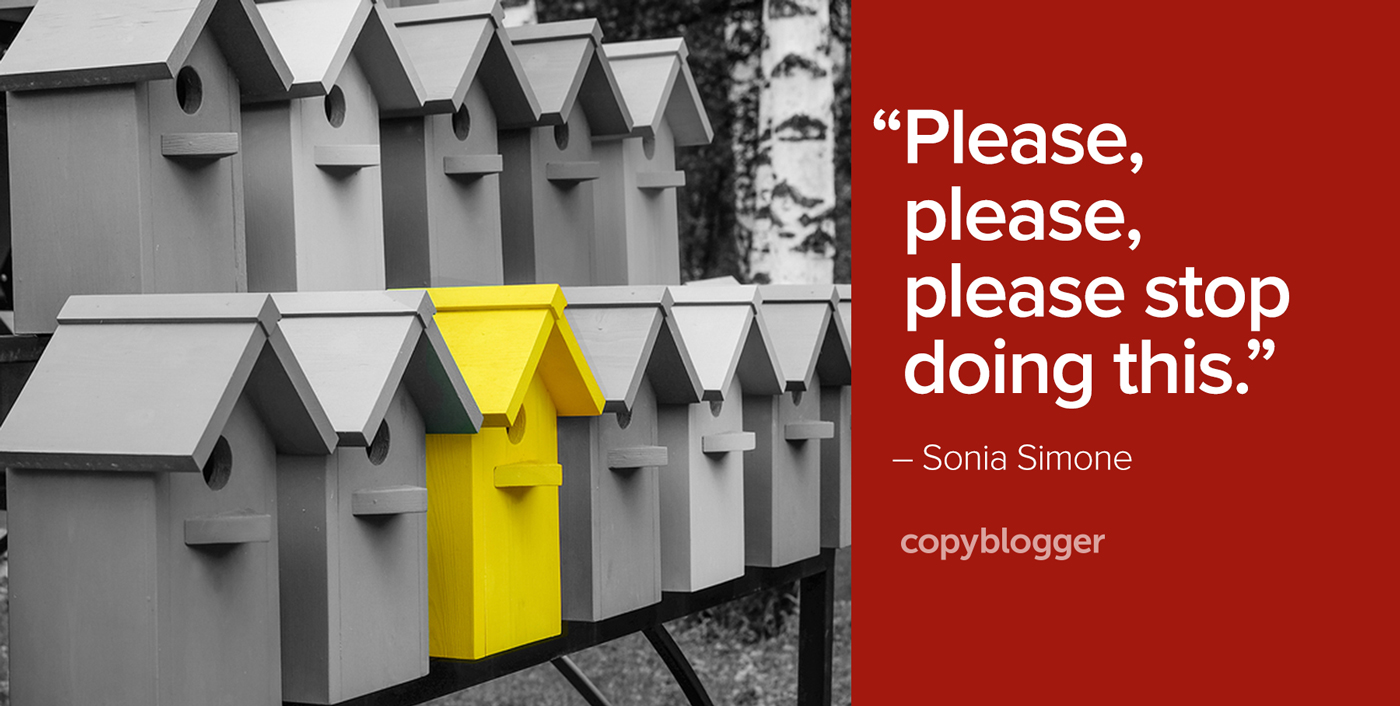 It always begins with so much promise.

“I’ve been working really hard on my site. I put a lot of time and effort into it, but it’s just not getting any traction. Can you take a look?”

I don’t want to take a look. Because by now, I know what I’m going to find. And it just makes me sad.

There it is, the capable site design. The perfectly decent headlines. The bullet points of usefulness. The careful, even painstaking articles, describing 7 Ways to Do the Thing.

The blogger has been studying, and that’s excellent. We love content marketing strategy. But not when writers forget the most important thing:

Nobody has the time or attention span to read a boring website.

Why do we do it? Why do we launch a new site, when there are already hundreds of sites exactly like it?

Why put hours into writing content that melts into the vast, indistinguishable mass of Meh?

From my observation, there is one underlying reason there’s so much boring content being published:

We don’t want to use an unusual word, because someone won’t like it.

We don’t want to uncover a thorny problem or controversial issue, because someone won’t like it.

We definitely can’t tell the truth about the way we’re weird, or different, or vulnerable. We can only conform, because that’s the only way to be safe.

Nothing will kill your business faster than dull conformity.

When you make yourself bland and inoffensive, you appeal to no one. No one gets angry at you … and no one particularly wants to spend any time with you, either.

You’ve been in hiding so long, you’ve forgotten what it was like to be truthful.

If you ever get the chance to spend time with very small children, you’ll notice something.

None of them are boring.

(Parenting reality moment: Spending a lot of time with little kids can be excruciatingly boring, especially if you can’t muster enthusiasm for their weird obsessions. But their thoughts, their expressions, their points of view, their wild passions — these are not boring people.)

Kids are not boring for two reasons:

Now, the process of teaching kids how to be good members of our culture is a good thing. Potty training and learning to eat without throwing your food are wonderful developments for everyone.

But the insidious messages always ride alongside.

“Those don’t really go together.”

“I’m sure you don’t really mean that word.”

“Being an artist (writer, cowboy, ballerina, musician, astronaut) is really hard. When you get bigger, you’ll choose a real job.”

Parents do it, teachers do it, and maybe more than anyone else, other kids do it. We knock all of the weird edges off one another.

So we make ourselves palatable and convenient. Girls are pretty and boys are tough. And no one likes the weird kid who reads too much and spends all that time by herself.

A word or two about honesty and outrageousness

There have always been some who try to create success by making themselves highly, visibly obnoxious.

The professional troll, the shock jock, the provocateur.

It’s pretty easy to infuriate people in order to get their attention. Easier than ever, in fact.

But mistreating other people to get attention isn’t “authenticity.” It’s just bullying. And the success it leads to is short-lived and shallow, if it comes at all. Which it probably won’t, because paying attention to you isn’t the same thing as trusting you.

Trust me, if you’re at all honest, you will offend people. You don’t need to go looking for ways to be offensive.

What to do differently

So, I’m not advocating that you go back to stomping, screaming, or throwing things.

Growing up is fantastic. I love grown-ups.

What I am advocating is that you re-find the habit of telling the truth about who you are.

The most important thing you can do to end the horrible cycle of boring writing is to write with your own voice. Your honest, unafraid voice. Even if it bothers people. Even if it makes people nervous.

“This is the time to use that ‘shutting the hell up is free’ coupon code. It never expires.”

Protip: If people really made sites that you could buy & watch checks start rolling in with 0 effort, they wouldn't be selling them to you

“I spent too long waiting for someone to call me a writer before I was willing to act like one.”

“Did you miss the Google Home Super Bowl ad with the mezuzah in it because you were hanging out with activist rabbis instead of watching the game? Me, too!”

“Your friends are in relationships, eating wedding cake (mmmmmm!) and having all the sex while you stare wistfully out the window, waiting for your one true love to appear as a single tear rolls down your cheek.”

“Why do we tell women they are ‘too much?’

I will spend my life telling them to speak up, strut more, push the edge, and show up.

I want to see all you got and then some.”

“Resilience is what you hold onto and trust when it seems like there’s nothing left, and it’s more subtle and trustworthy than ‘bucking up.'”

“‘But Brian,’ the voices in my head object. ‘What about branding, engagement, social sharing, SEO, comments …’

‘Let me stop you right there,’ I tell the voices. Which is awkward, because I’m in a crowded coffee shop.”

You get the idea. You’ll never mistake one of these voices for someone else’s. Each one is distinctive, opinionated, maybe sometimes a little cantankerous. And each one inspires action because they’re speaking from a position of courage and truth.

Please, please, please stop undermining all of your hard work by being afraid to step into a real voice. The world needs to know what you honestly have to say.

Previous article: Transform Your Content from Predictable to Provocative with This Bold Method
Next article: A Guide to Meaningful Content that Resonates