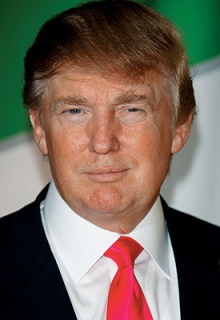 We even know his hair.

But do we know how he does it?

If Donald Trump has created a building in your city, you know it. You not only know he has one, but you know exactly where it is.

Maybe you even know how much it cost. You might even know about buildings he’s developed in other cities.

Are there any other real estate developers you can say that about? Why do we know so much about The Donald?

This happened to me when I was in Chicago last year. I looked out the window and BAM … there he is again. Trump International Hotel, Chicago.

So what are the methods that The Donald uses, the stuff that can help us find a larger audience, write a better blog, build a better business?

Are you posting only on your own website? Are you only writing, but not doing videos? Are your ads appearing only where everyone else’s (including your competitors) are? Then you’re missing out on a lot of what you can do to build audience, visibility, and profile.

If you’re only giving your audience a part of who you are, and only in a certain location, that’s like being a guru on top of a mountain in Bhutan. If no one can find you, you’re not likely to get a lot of disciples.

The Donald may be rich, but do you really think he pays cash — whether to develop real estate or to access new audiences? Most people misunderstand how business works and think that, in many cases, they’re unable to do something that is totally within reach.

When Trump writes a book with Robert Kiyosaki of Rich Dad, Poor Dad fame, do you think it’s because they were like “High five! Let’s write a book together, just for kicks!”

Top-level players do projects like these to get access to each other’s audiences. Everything is strategic. Everything is done for leverage. And “leverage” is just another word for “I didn’t pay cash to play.”

Same thing when he does Trump University and The Apprentice. All of these are audience plays. Trump doesn’t pay cash, ever.

He trades chips with people who can benefit him.

You can work the same angles. Don’t try to get your audience, or your customers, by buying them. Instead, play the game. Use chips. Think strategically about how you can use leverage to gain access to something you otherwise couldn’t.

When I walked into the Trump International Beach Resort in Miami, I was skeptical. What I believed I’d see and what I actually experienced were vastly different.

The air in the Trump International had a light, fragrant, airy perfume. It was amazing.

Can you shock people? Not with rudeness or vulgarity (necessarily), but with your over-the-top attitude, your expertise, your commitment to doing something great, or your extravagance?

You may not have the ability (or desire) to shock with Trump-like excess. But you can also shock with your appreciation for the little things — the details.

You may not take The Donald seriously. The hair does make it difficult.

Or you may think you could never translate what he’s done to your own business. It certainly isn’t easy.

But it does have a formula, and this is it:

You have to try.

Julien Smith is the New York Times bestselling author of Trust Agents, with Chris Brogan. Subscribe to his blog In Over Your Head to learn to be more awesome and productive, one day at a time.

Previous article: Three Keys to Creating an Online Experience Worth Paying For
Next article: Copyblogger Weekly Wrap: Week of DEcember 13, 2010