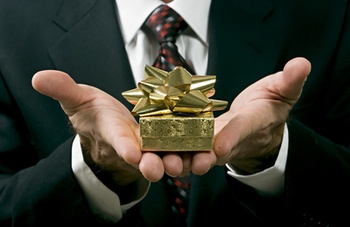 What’s the secret trick to creating a really successful online business? Investing in the latest how-to information, right? Or maybe it’s a complicated new piece of software? Could it be the liberal use of fake yellow highlighting?

The secret to online success isn’t so different from the secret to offline success. There’s a quality the best entrepreneurs share that gives them a massive competitive advantage. And as usual, being online lets you leverage that secret for even greater success.

The millionaires’ secret trait is:

Despite stereotypes about greedy, ruthless businesspeople, the truth is successful entrepreneurs always find ways to give.

They give away generous samples of their products. They share their time, energy and success with partners. They give back to their communities. They generously support charities. They reward great employees.

They know that generosity is the smartest way to open up the floodgates of success.

Some people swear by the “law of attraction,” and others swear at it. The idea is that if you focus on a particular thing, that thing will magically start to fall out of the sky and land on you. Focus on money and you’ll start attracting money. Focus on garbage and you’ll attract garbage.

The law of attraction does work, but no supernatural forces are required. To find out why, watch this video.

Opportunities for spectacular success have been moonwalking right in front of you for years now. But you weren’t focusing on them. Your attention was riveted by the latest online flame war or celebrity train wreck, or even on the list of reasons you can’t be successful.

It feels like focus can summon good (or bad) things through some kind of magical power, but it isn’t magic at all.

When you cultivate generosity in all its forms, you shift your focus to what the self-help movement calls abundance. You start to see how much great stuff is all around you right now. You start to feel wealthy.

(If you ever find yourself in an anxiety attack over money, give $100 to a charity that helps the desperately poor. It’s an instant fix for cramped ideas about wealth and success.)

Generosity gets you to focus on the fact that there’s actually plenty to go around. Plenty of money, plenty of customers, and plenty of success.

Focus on those things, and poof, opportunities start to “magically” appear. You still have to take action on them, of course. But the path opens right up in front of you.

It seems weird, but it works.

Humans have a deep-seated need to repay generosity.

When you give away exceptional content, most people are hard-wired to want to give you something in return. A great blog can create that feeling, but you’ll trigger it more forcefully when you offer a sample of a paid product.

Ever tried a free sample at the grocery store and then felt like you had to buy the product so you don’t seem like a mooch? That’s reciprocity.

Free samples work just as well online as they do at the grocery store. If you give away a first-rate nibble of your product, not only does the buyer see for herself how good it is, she feels like she owes you.

For digital products, aim to give away a free sample that is demonstrably worth as much as the total asking price of your product. If your sample is clearly worth hundreds of dollars and your customer gets it for free, she’s much more likely to fork out your asking price of $297 for the whole package.

Massively overdelivering is one of the keys to success in digital products. Because they’re so cheap to reproduce, you can afford to be generous with your free samples. Make your generosity remarkable.

When Michael Stelzner announced that he was taking nominations for the ten best writing blogs of 2008, at first I didn’t think much about it. As in years past, I expected Copyblogger and Men with Pens to take the top positions, and they did.

But I was surprised by a few names that weren’t yet on the nomination list. So I put together a post with links to some of my favorite writing blogs. I also included a request to nominate the writing blog my readers found most valuable, whether it was mine or someone else’s.

My readers jumped into the voting. Some of them voted for me and some for other blogs.

Making that post strengthened my ties to a great community of bloggers. It created good feelings in my readers. It brought attention to a few blogs that belonged on Stelzner’s list but hadn’t been nominated yet. And it let my readers know about some great resources.

As it happens, I ended up getting a spot on the final top-ten list, which was a wonderful bonus. But I got tremendous value from making the post even if I hadn’t made the final cut.

If I had just begged for votes, I would have gotten nothing at all if I hadn’t made the list. By being generous, I made myself a winner no matter what the outcome was.

Because I shaped the post so it was 90% in service to others and 10% in my own interest, the post also got a nice number of re-tweets on Twitter. People love to share news about acts of generosity. Look around and you’ll see that the most talked-about bloggers are also often the most generous.

Even Santa Claus has boundaries

Santa just gives presents to nice children, not naughty ones, right? Now I don’t believe there’s any such thing as an undeserving child, but there are a fair number of adults I could put into that category.

If you’re generous, a few people will take advantage of that generosity. They’ll scrape your free stuff without crediting you, get a refund 20 minutes after they buy (and copy) your paid product, then promptly load it to BitTorrent.

Just like social media and the internet multiply the value of generosity, they also multiply the actions of jerks.

Don’t worry about it.

The benefits you get from generosity will dwarf the few crumbs you’ll lose to selfish people who take unfair advantage. You’ll build 1,000 times more than you lose.

If you know who the bad actors are, put them on your naughty list. Blacklist them and move on.

But be careful not to spend too much time thinking about getting even. That pulls your focus away from your own success. If you want satisfaction over the long run, keep your eyes on your own prize.

And anyway, these people will never see the moonwalking success bear in their lifetime. That’s worse punishment than anything you’ll be able to dole out.

Previous article: Join Me at Affiliate Summit in Las Vegas (20 Free Passes)
Next article: How to Create Better Content With Constraints