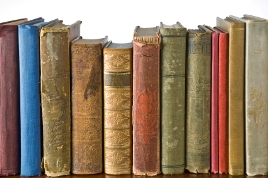 You don’t have to look far to find a list of the best books a writer should read. A benefit for new writers, no doubt.

Unfortunately, those of us who have been around for a number of years often own every book that tends to make these lists.

Not only do we own them, we’ve absorbed them into our bloodstream.

It wouldn’t be so bad if the list changed from year to year.

So while the usual best-books-writers-should-read lists are fine for the greenhorns in the field . . . what about the rest of us?

What about those who want to go from undergraduate to graduate work? Who want to inject a tangible and seductive element in their writing that growls “You better take notice of me”?

What are the best books they should read? And why?

Below is a list of books on my shelf that are stained, dogeared, loose-in-the-binding, and scrawled on from front to back. Some are “writing books,” most aren’t.

They’re unusual recommendations, to say the least. But I have my reasons for that. As you’ll see in a minute.

The authors of this Bible edition made language their slave. They relished words like derision, rage, smitten, asunder, wrath, vex, begotten, uttermost, vessel.

Make a study of the Old Testament and you’ll develop a vocabulary that smacks your readers in the chops.

What you do in the first five pages matters. And it matters a lot.

(The same is true for your first five lines.)

Literary agent Lukeman discusses the craft of writing well-plotted fiction that makes your writing as sexy as a young lady in a saucy skirt.

Emmy- and Peabody-Award winning producer, writer and teacher Dunne delivers some of the best tips you’ll find on how to inject emotion into any story.

4. Barbarians at the Gate

by Bryan Burrough and John Helyar

This is business nonfiction at its best. It helps that the story — the $25 billion leveraged buyout of the RJR Nabisco Corporation — is loaded with flamboyant characters and edge-of-your-seat action.

Study it to learn how to make your stories pop off the page and your readers cling to every word.

5. Letters to a Young Poet

Not into German poetry? Get over it. A good copywriter marries a hard-nosed attitude for results with the soft capital of poetic wisdom. He becomes the killer and poet. Besides, your business-saturated soul could use a dose of the wisdom of the artist.

6. One Hundred Years of Solitude

Legend has it that one reader wrote out every word of this 448-page novel — to make sure it was real.

Who could blame her, when the first line reads: “Many years later, as he faced the firing squad, Colonel Aureliano Buendía was to remember that distant afternoon when his father took him to discover ice.” And it never lets up.

Bone up on the history of science in this strikingly readable explanation for the complex phenomena at the cutting edge of contemporary physics — gravity.

(Hint: Read this book and you’ll walk away with some magnificent metaphors.)

This psychological portrait of the sage of Monticello demonstrates two things: People like stories . . . and people really like stories about people.

Imitate the ebb and flow of people-centered tales to make what you write memorable.

9. Complete Odes and Epodes of Horace

Roman poet Horace is like the E. B. White of the Roman world. He has that same loathing for pompous verbosity. The ruthless cutting of crap, jargon, and extra words. In other words, he’s hellbent on mindless simplicity.

In his third book, Malcolm does what Malcolm does best: expose the mysterious pattern behind a particular phenomenon.

This time he writes about genius and how culture, circumstance, timing, birth, and luck account for success. This book will push your motivation button something fierce. Read it.

OK, I need to come clean with you

Yes, I think you should read every book I listed above, for the practical, get-your-hands-dirty lessons you’ll learn.

But I have another reason I want you to read them.

Namely, to expand your mind.

What do I mean by that? The more you have in your brain — both from study and from direct experience — the more fresh, new, killer ideas you’ll come up with.

Reading Why Evolution Is True might give you a complete new set of powerful metaphors to illuminate your current project. Scanning the design magazine Wallpaper could give you an incredible angle for your blog relaunch.

My point is not necessarily that you read the above particular books.

My point is that you read — and read widely.

Wade into some strange dimensions

Get into dimensions that are totally alien to you. When you do, your writing will go from paralyzed old coot to strapping stud.

Bottom line: One of the most important keys in writing is the ability to blend totally divergent concepts into something radically new.

And the more divergent data you have to work with, the better you are going to be coming up with those great ideas that put people under your spell and keep them loyal to you.

Which doesn’t sound like a bad idea, does it? So, what’s on your bookshelf?

Previous article: The First Rule of Copyblogger
Next article: 5 Essential Blogging Tips from the Father of Chinese Philosophy